Kashmir Martyrs Day is being observed by Kashmiris on both sides of the Line of Control and around the world to pay homage to martyrs of 13th July 1931 tragedy. 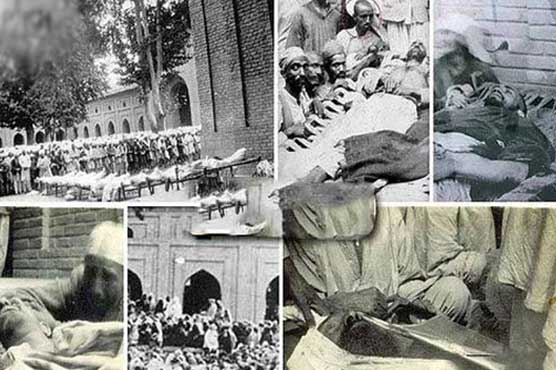 On 13th July 1931, the troops of Dogra Maharaja had killed 22 Kashmiris, one after the other outside the Central Jail in Srinagar during the court proceedings against one Abdul Qadeer who had asked the Kashmiri people to defy the Dogra Rule.

The APHC has appealed to the people to conduct a march towards the Mazar-e-Shuhada, Naqshband Sahib in Srinagar on the day where the martyrs of 1931 are buried.

After abrogation of the article 370 BJP dropped Kashmir Martyrs’ Day from its list of public holidays for 2020, while ironically October 26 was added to be observed as ‘Accession Day’ which was in fact the Day of Occupation of the Indian Occupied Jammu and Kashmir IOJ&K.

Though the IOJ&K has been brutalised for years, but since the lockdown in August 5, 2019 Indian security forces have become even more inhumane and brutal for the 8 million caged Kashmiris.

Prime Minister Imran Khan has reaffirmed Pakistan’s unwavering commitment to continue to support the just struggle of Kashmiri people for their right to self-determination.

In a series of tweets on Monday in connection with Kashmir Martyrs Day, he said Pakistan has always stood steadfast for the Kashmiri right to self-determination and that day is not far when they will be liberated from the clutches of Indian illegal occupation.

The Prime Minister said we salute Kashmiris for their continued struggle against the illegal and barbaric Indian occupation of Jammu & Kashmir.

He said the martyrs of 13 July 1931 were the forefathers of today’s Kashmiri resistance. Their descendants have, generation after generation, laid down their lives for freedom and today they continue to valiantly fight and defy a Hindutva Supremacist regime bent on demographic engineering to wipe out the Kashmiri people and their identity.