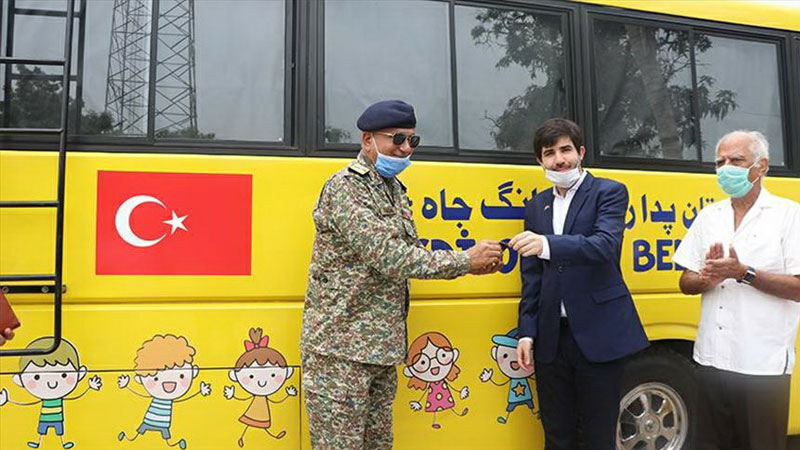 Turkey’s state-run aid agency on Wednesday delivered a school bus for students in Balochistan, Pakistan, a southeastern province with low levels of development.

The handover ceremony was held at the Naval Headquarters in the southern port city of Karachi, according to a statement by Turkish Cooperation and Coordination Agency (TIKA). It was attended by Commander Coasts Vice Adm. Faisal Rasul Lodhi and TIKA’s Karachi Coordinator Ibrahim Katirci.

Katirci said that during his recent visit to different parts of Balochistan, he realized that students have to walk miles every day to reach their schools. Therefore, TIKA decided to contribute its share to resolve this problem.

The purpose-built bus, handed over to the administration of a government school adopted by Pakistan Navy in the port city of Gwadar, will make it easier for students to get to school, he said.

The coordinator said that since Balochistan has the least percentage of school-going children, the bus with the slogan “Let’s go to school Balochistan!” will motivate other children as well to pursue education.

Speaking at the ceremony, Vice Adm. Lodhi thanked Turkey, calling the donation the “sincerest example of the Turkey-Pakistan friendship.”

The agency has executed numerous developmental projects in Pakistan since 2010, including hospitals and vocational training centers.

Its Karachi chapter established playgrounds at two schools in Ormara and Gwadar districts. A solar energy system in five villages of the region, aimed at providing electricity to the homes of 200 families, is also under way.