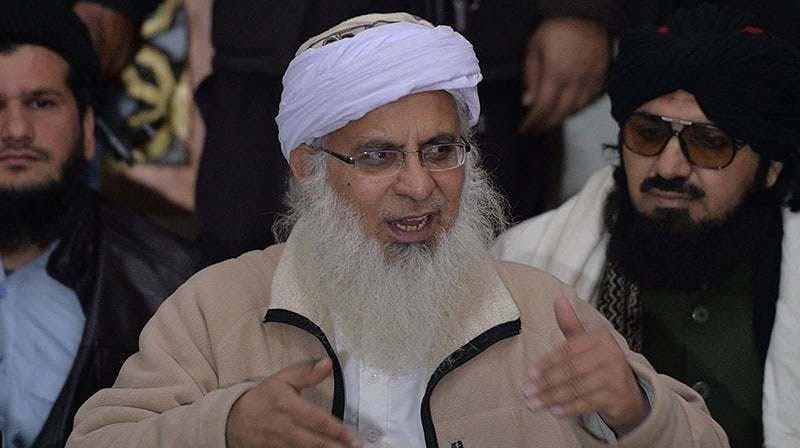 The administration office of Jamia Fareedia, a seminary in E-7, was occupied by Maulana Abdul Aziz in the middle of the night on Monday.

Mr Aziz and his wife Umme Hasaan occupied the seminary office, after which he led morning prayers and announced that the seminary’s principal, Maulana Abdul Ghaffar, had been removed.

During this time, Mr Ghaffar stayed in his house on the premises of the seminary.

Maulana Yaqoob Ghazi, a close aide of Mr Aziz, claimed that Mr Ghaffar did not want to leave because he knew he was “on the wrong side”.

The incident was followed by a protest at noon, leading police to block the road towards the seminary. Police and capital administration officials have ruled out the possibility of violence.

An administration official, on condition of anonymity, said there were only a handful of seminary students and staff at Jamia Fareedia or any other seminary because of the closure of educational institutions due to the coronavirus pandemic.

The situation has placed the city’s administration in a fix, as Mr Aziz’ move may have violated an agreement he signed with the Islamabad Capital Territory (ICT) administration in June.Mr Ghazi said: “Maulana Abdul Aziz elevated Maulana Abdul Ghaffar to the post of deputy chief from administrator a few years ago. He removed Maulana Ghaffar as deputy chief around two months ago but he got too close to the authorities and tried to take Jamia Fareedia over.”

The police have cordoned off Jamia Fareedia and blocked all the roads leading to it.

Senior police and administration officials said that well-equipped police personnel, including the Counter Terrorism Force, Anti-Terrorism Squad and Anti-Riot Unit, were deployed around the seminary shortly after Mr Aziz moved there from Jamia Hafsa. Senior administration and police officers, including the deputy commissioner, also visited the seminary to negotiate with Mr Aziz.

Mr Aziz, his family and more than 50 students from Jamia Hafsa, left G-7 on board wagons and headed to Jamia Fareedia at Fajr, officials said. Almost an hour later, an assistant inspector general from the Special Branch brought the matter to the notice of concerned officials.

The officers said two parties -the seminary’s nazim Mr Ghaffar and Mr Aziz – are now inside the seminary, and both claim ownership of it. Haroon Rasheed said that Jamia Fareedia was built by his grandfather in the 1970s and Mr Aziz was its rightful owner. He said Mr Ghaffar and the government were trying to remove Mr Aziz and take possession of the seminary.

“The government, including the administration and police, are helping Maulana Ghaffar and at the time we reached the seminary, officials from the police and administration also came there and cordoned off the area,” he said.