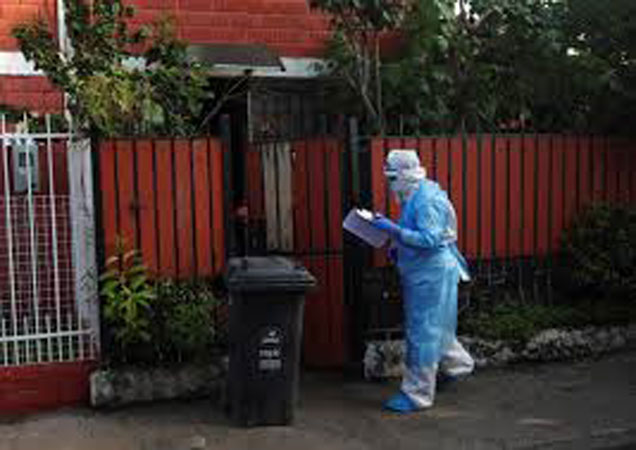 Six months ago, Venezuelan emergency doctor Norelis Portal was laid off from Chile’s public health service because she had not Received the green light from the country’s stringent medical certification system.

Today, she is one of thousands of migrant health workers recruited to the frontlines of its fight against the new coronavirus.

Portal, 52, and her team visit COVID-19 sufferers at home and in state isolation units in some of Santiago’s most crowded, poor and infected areas to conduct tests and assess symptoms, keeping the burden off near-saturated hospitals.

“The last 20 years in Venezuela taught my generation how to handle crises,” Portal told Reuters.

Portal migrated to Chile in 2017 with experience in emergency and respiratory care. Her transformation from outsider to the frontlines of Chile’s battle against coronavirus holds up a mirror to the country’s uneasy response to wave of migration, largely from crisis-hit Venezuela, that has grown fivefold in 30 years.

Center-right President Sebastian Pinera made migration a key issue of his 2017 election campaign, pledging to tighten laws and crack down on foreigner-driven crime. Today, his government is appealing for migrant professionals’ help.

Chile is nearing the peak of its coronavirus outbreak, with a caseload among the worst per capita in the world and deaths predicted to follow in the coming months. There are a total 284,541 cases and 5,920 fatalities.

Medical workers are exhausted and falling victim to the virus, and specialists are in short supply. So Chile has turned to retired doctors, student nurses and imported talent.

Unpublished figures obtained by Reuters show almost 3,000 public health service workers are off sick with coronavirus, but 13,849 more have been signed up, including more than 600 doctors, more than half of them foreign nationals.

Many countries have a large migrant health workforce, but in Chile many struggle to gain work certification because of rigorous and expensive local checks. Health workers from Venezuela, Colombia and Cuba often end up as Uber drivers, petrol pump attendants or waiters.

Many migrant health workers are specialists in areas which Chile’s public sector has historically lacked and now desperately needs to keep patients alive, the director of the country’s civil service said in an interview.

Alejandro Weber said foreign doctors brought “knowledge, experience but also the desire to lend their skills to the state,” pointing to a new “social pact” for the multicultural nation.

An emergency law last deployed by Chile’s government after the 2010 earthquake allows it to recruit thousands more health workers.

Many have been drafted from the private sector but a large number are foreign medics for whom the usual stringent checks have been suspended.

Juan Carlos Riera, president of the Chilean Association of Foreign Medics, said the move came as a huge relief for medics to be able to use skills honed over years.

“Many doctors have told me they would prefer to expose themselves to the virus than to continue having no income or a minimal one that’s impossible to live on,” he said.

Dr. Jesus Valera Macho, 36, a Venezuelan trauma surgeon who was working as a cleaner before joining Portal’s team in March, said taking on the coronavirus was the least he could do.

“We’re not Chilean but this country gave us the chance to restart our lives,” he said. “It’s we who are grateful.”

I SERVE MY COUNTRY

The campaign led by the civil service, I Serve My Country in an Emergency, drew 13,000 applicants, with 99% indicating immediate availability and 70% willing to be transferred anywhere in the country. They included 1,000 foreign medics, many of them experienced specialists.

Medical workers say the help cannot come soon enough. Carlos Romero, head of intensive care at the University of Chile’s clinical hospital, said he sometimes debated if he had time to sleep or eat.

Unions have cautioned against relying on unchecked resources. Dr. Patricio Meza, of Chile’s College of Doctors, said not fully certified should not work unsupervised.

“The most important thing is to safeguard patients’ safety,” he said.

A nurse at a central Santiago hospital, who withheld her name because she was not authorized to speak to the media, said the gains outweighed the risks.

“It’s better to have more people, someone who can alert you to a problem with a patient, than that they are left alone and something happens before you realize it,” she said.

Portal said her generation was accustomed to facing crises head on. Her father locked her indoors during a violent uprising when she was 22, but she escaped through the window to help treat the injured in her local hospital.

“I feel trepidation but no fear anymore,” she said. “As a doctor you can’t do anything but act. This is a moment. It will be tough but it is temporary. It will end.”