Severe Threat Of Locusts In Pakistan

The accelerating growth of locusts in Pakistan are a grave threat to the farmers, which have created dire food shortages. It has created a billion of dollars damage to the crops and livelihoods of the associated farmers and workers. Millions of people have left found to be starving and those below the poverty line are severely distressed.

The swarm of locusts initially originated from United Arab Emirates in mid 2019 and then from Iran. This swarm of locusts has badly wrecked down winter crops leaving the farmers especially of Sindh in a miserable plight. The fields of wheat and mustard had been badly ruined in Sindh due to invasion of locusts. Other crops of cotton, chilli, onion and tomato had also been adversely affected in farms and fields of Balochistan. This has incurred a monetary loss of 10 million rupees for the farmers, which is indeed a gigantic loss of their livelihood. Farmers are of the view that it will take years for them to recover from this monetary loss.

It is indeed disillusioning to note that several farmers had obtained micro-finance to invest on their farmlands but their crops had been attacked by locusts. They had seen loss of wheat and mustard crops, which accounts for a damage of roughly 5 to 10 million rupees.

United Nation’s Food and Agriculture Organization has predicted a genuine loss of nearly 2 billion pounds of winter crops such as wheat. The total forecasted loss of summer crops is reported to be 2.3 billion pounds. Considering this vulnerable loss, Pakistan’s economy which accounts for about 20% of GDP seems to be getting economically crippled. It is also because nearly 65% of the population is employed in the agricultural areas of Pakistan. This presents an alarming scenario especially considering the ever increasing inflation and accelerating economic burden amidst corona virus pandemic. The poor and the wage workers are unable to afford purchase of staple foods like wheat flour and vegetables considering their soaring prices.

The locusts are expected to pose an ever-increasing threat for the farmers in the years ahead as well. It has been forecasted that the second generation of the locusts is expected to be 20 times bigger. Locusts seem to be moving in swarms of 50 million, which present a danger to the summer and winter crops. Locusts have an ability to travel and move at a speed of 90 miles a day, and their eggs producing capacity stands at 1000 eggs per square meter of land. It means the reproduction capacity of the locusts accelerate, which can harm the productive yield of the farmland. The starvation and poverty is expected to increase at alarming levels in the near future. Therefore, there stands a dire need for the government to address the issue of the growth of the locusts in different provinces of Pakistan. 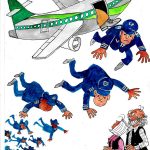