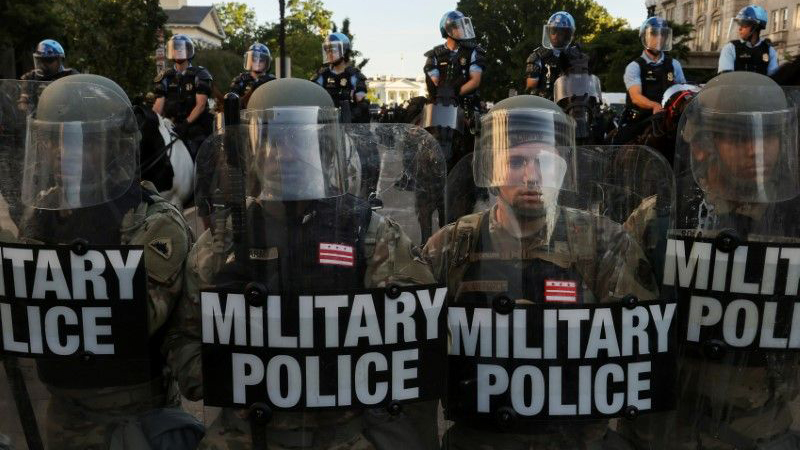 “Battlespace” was the word Defense Secretary Mark Esper used to describe protest sites in the United States. The top US general reinforced that image by appearing in downtown Washington in camouflage during a Monday evening crackdown.

Helicopters that could easily be mistaken for active duty US military ones staged show-of-force maneuvers in Washington above people protesting the killing of George Floyd, an unarmed black man, at the hands of a white police officer in Minneapolis.

As President Donald Trump increasingly turns to militaristic rhetoric at a time of national upheaval, the US military appears to be playing a supporting role – alarming current and former officials who see danger to the US armed forces, one of America’s most revered and well funded institutions.

“America is not a battleground. Our fellow citizens are not the enemy,” Martin Dempsey, the retired four-star general who served as chairman of the Joint Chiefs of Staff, wrote on Twitter.

A current military official, speaking on condition of anonymity, voiced concern about the lasting damage that would come from using the military as a “political prop.”

“Presidents come and go … the uniform has to be maintained,” the official said.

For Trump’s critics, the Republican president’s reliance on the military in domestic endeavors risks making the armed forces, which are meant to be apolitical, appear aligned with Trump’s political agenda. He has previously employed the military to help stem illegal immigration and used defense funding to build his border wall.

But drawing the military into his response https://www.reuters.com/article/us-minneapolis-police-protests/trump-pushes-military-response-as-u-s-girds-for-more-protests-idUSKBN23916N to the sometimes violent civil unrest that broke out in Minneapolis last week and spread to dozens of cities, is particularly problematic.

At the core of the discomfort is a single idea: The military was designed to protect the United States from foreign adversaries and uphold a constitution that explicitly protects the rights of citizens to protest peacefully.

Even the head of the National Guard acknowledged that responding to domestic crises makes his troops uneasy. So far, more than 20,000 National Guard members have been called up to assist local law enforcement with protests around the country.

“This mission is an uncomfortable mission. They don’t like doing it, but we can do it,” said General Joseph Lengyel, chief of the National Guard Bureau.

Esper and General Mark Milley, chairman of the Joint Chiefs of Staff, accompanied Trump on Monday as he posed at a church near the White House while holding a Bible after law enforcement officers used teargas and rubber bullets to clear the area of peaceful protesters.

Trump had just delivered a speech condemning “acts of domestic terror” and saying the United States was in the grips of professional anarchists, violent mobs, arsonists, looters, criminals and others.

A senior defense official suggested neither Esper nor Milley knew about the photo-op and had been at the White House to give Trump an update on response efforts.

“As that meeting concluded, the president indicated an interest in viewing the troops that were outside and the secretary and the chairman went with him to do so. That’s the extent of what was taking place,” the official said, speaking on condition of anonymity.

In a memo to Defense Department employees on Tuesday, Esper called on personnel to “stay apolitical in these turbulent days.”

James Miller, a former Pentagon official who sits on the Defense Science Board, said he was resigning from the board after seeing the peaceful protesters being cleared by tear gas and rubber bullets before a curfew on Monday and Esper’s accompanying Trump to the church.

“You may not have been able to stop President Trump from directing this appalling use of force, but you could have chosen to oppose it,” Miller said in his letter of resignation, which he published in the Washington Post.

Kori Schake, of the conservative American Enterprise Institute and an expert on US civilian-military relations, said Esper and Milley need to be held to account for their “shocking” decision to appear in that setting.

“They made choices. They could have said, Mr. President, I think it would send a bad signal for me to do this,” Schake said.

Alice Friend, a former Pentagon official, said Esper and Milley, by using terms like battlespace, were blurring the lines between American citizens in the United States and enemies in war zones.

“To divide and conquer at home, using the United States military, is an incredible escalation of the government’s coercive power,” said Friend, a fellow at the Center for Strategic and International Studies.

A senior defense official, asked about such criticism, said Esper was simply using the terminology he’s accustomed to using as the leader of America’s military.

But the Pentagon’s role in the civil unrest could soon dramatically deepen if Trump decides to deploy active duty forces, something the US military has been reluctant so far to do.

Trump on Monday threatened to send active duty US troops to stamp out the civil unrest gripping several cities.

To deploy the military on US soil for law enforcement purposes, Trump would need to invoke the 1807 Insurrection Act https://www.reuters.com/article/us-minneapolis-police-protests-explainer/explainer-can-trump-send-the-u-s-military-to-quell-violence-at-protests-idUSKBN2390BG – something last done in 1992 in response to the Rodney King riots in Los Angeles.

To that end, the US military has pre-positioned active duty forces, largely military police and engineers, on the outskirts of the Washington, D.C.-area to potentially deploy, if needed.

The top Republican on the House of Representatives Armed Services Committee, Mac Thornberry, said discussions about the Insurrection Act could easily make US troops “political pawns.”

His Democratic counterpart and chair of the committee, Adam Smith, said he called on Esper and Milley to testify.