“The world will never be the same;” the “normal economy isn’t coming back;” and businesses “will have to change permanently,” these are a few of the phrases that one comes across on the internet nowadays. Verily, the impacts of Coronavirus cannot be understated. It doesn’t matter whether you are the largest economy in the world or not, this virus does not discriminate. With decades of gains wiped off the global capital and stock markets amid fears mounting due to rising unemployment, a shadow of deflation shrouds the global economy, which is expected to experience a negative growth as compared to a projected three per cent in 2020. The International Labor Organisation has estimated that a total of 195 million jobs could be lost globally. International trade could shrink by 32 per cent.

For Pakistan, which was already in trouble, the timing couldn’t be any worst. We had only commenced our march towards stability but now it seems to break into a wobbly tread on a bumpy road. But there might be some silver lining.

In such testing times, PSX seems to be the only market in the world that is rallying

According to different estimates, the virus may cost our economy a loss of Rs 1.3 trillion. The Planning Commission has estimated that the virus can cause the economy a whopping Rs 1.1 trillion from April till June only. As much as we wanted more people in the tax net, the current crisis might affect FBR’s revenue in a drastic manner. For instance, Karachi might lose Rs 380 billion in tax income until June.

Many observers and analysts were claiming falling oil prices as a victory for Pakistan but they were missing the point that due to this double whammy of reduced demand and commodity price crash, many of our export destinations (the US being the top one) will suffer and subsequently our exports will, too. It has already started to happen: exports dropped 54 per cent in April 2020. Estimates regarding the loss to our exports reach up to $4 bn. 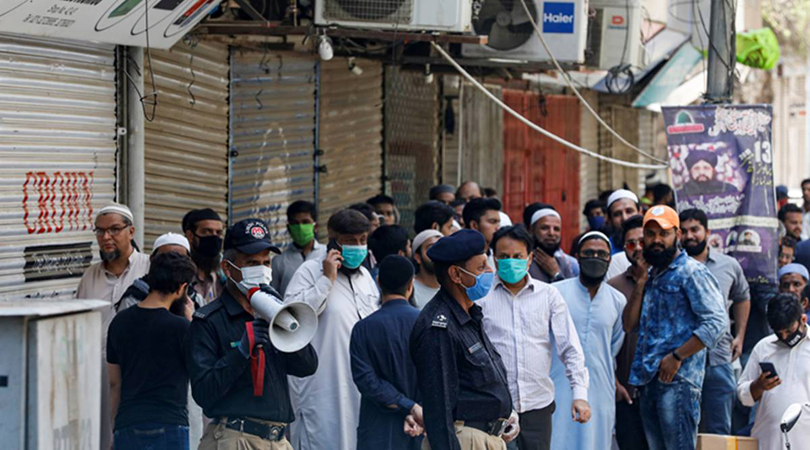 The US, being the largest export market of Pakistan, is to face a slow GDP, low car sales, deflation and spending is to remain slow therein. China, another of our largest markets, will face some temporary slowdown, evidently. The EIU says Chinese growth rate might be a negative 1.5 per cent, revised from a five per cent growth earlier.

Due to the lockdown and resultant closure of many businesses, about 47 per cent of our workforce from the service sector can suffer unemployment.

According to a model by Pakistani economists, the GDP may contract by 4.6 per cent (as per a certain scenario) and 10.5 million people can be unemployed.

Our stock market, PSX, plunged 25 per cent in March 2020 but later recovered. The index is consolidating around 33,000 to 35,000 points lately. In such testing times, PSX seems to be the only market in the world that is rallying. But will it continue its current trend? Or there are some headwinds in the near future?

Azhar Nadir Khalid, a seasoned investor with investment experience not only in Pakistan but internationally as well, said, “the Pakistan stock exchange is experiencing short-lived swings, triggered purely on daily sentiments. Investors need to understand that carried forward payments for the Govt and the industries would remain there as their liabilities. Slashing off the interest rate by SBP would have some commanding circumstances for some industries but on the other hand, it would also be detrimental to the interests of various market sectors. Moreover, PSX has an oil heavyweight index and it is directly affected by any turbulence in international crude prices, hence the investors must be very vigilant about the macro environment as Covid-19 is still not over and it will have a dreadful impact on earnings, dividend payouts and profits of the companies.”

What about the silver lining?

All is not lost. There is always a brighter side to look at. Starting with the oil prices, which are expected to remain range-bound, if not extremely low, and may provide us benefit in the form of savings from what is otherwise an expensive import bill – as energy accounts for more than 30 per cent of our imports. Secondly, lower interest rates might start to reap some benefits as Coronavirus settles down and the world starts to move back to normal – albeit it might take some time. Reduced oil prices, lower interest rates, might help in lower inflation as well. Combined with recovering consumer demand, this might bode well for the overall economy.

Our government has shown resilience as well. A Rs 1.2 trillion (~$7 billion) economic package was announced to help support Pakistan’s business sectors. Additional provisions have also been announced which such as deferred payments of Rs 100 bn and a tax refund of a similar amount.

The question comes down to the time it will take for this transition to happen. An L-shaped or U-shaped recovery will test the nerves of our business community, while a V-shaped recovery might help us get back on track -on road to slow and steady recovery. Whatever the case might be, we are at the disposal of an invisible enemy. In this example of survival, may it be that the last “man” standing wins and not the virus!