Classical literature inspires me the most: Inam Hasan

* 'From my batch at NAPA, I was the last person to enter this field,' he says 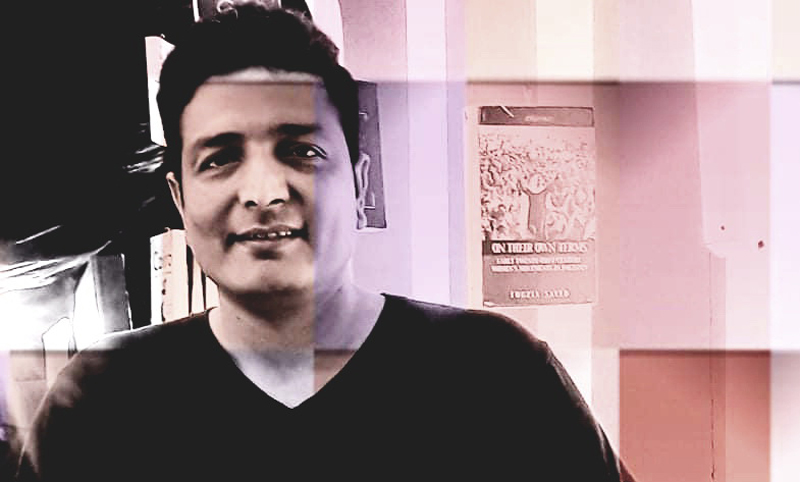 Although most of us know Inam Hasan solely for his horror serial, “Belapur Ki Dayan”, the Pakistani dramatist has much more to his name. A holder of a Master’s degree in English Literature and a student of Theatrical Art from NAPA’s first batch, Inam Hasan acted as a journalist for almost ten years for various channels including GEO and AAJ, and later on worked as the associate director for the Pakistani art film, “Mah e Mir”. He was also a co-writer for the movie “Actor in Law” and is known for making a series for ARY News in remembrance of Pakistan’s legendary creative artists. As a dramatist, Hassan also wrote “Andaz e Sitam” and “Tum Mere Pas Raho”, the former for Urdu 1 and the latter for HUM TV. Daily Times caught up with the writer and asked him a few questions, which are as follows

How and when exactly did you enter the drama industry as a writer?

From my batch at NAPA, I was the last person to enter this field. It took me a lot of years to leave journalism and come towards the drama industry. When I finally made up my mind in 2011, I brought an end to my career as a journalist and began working in the drama industry from the scratch. For two to three years, I did small projects for various production houses but none got the chance to be executed. I got my breakthrough with an MD Productions’ project with the help of Saif e Hassan. I narrated a story to him which I wished to dramatize. He asked me to go ahead and also became my editor who would go through the script episode-wise. He then took me to Momina Duraid who liked the script so much that she roped me in for three projects. My first serial, therefore, was HUM TV’s “Tum Mere Pas Raho”. Although I wrote many plays for her in the proceeding years, only two of my works, “Tum Mere Pas Raho” and “Belapur Ki Dayan” have been produced and sent on screen.

Why did you choose drama from all the genres of literature? Are there any dramatists who have acted as inspirations for you?

If I could write a quality novel or short story, I would have done that as well. As far as inspiration is concerned, Classical Literature has always inspired me, be it of the West or of the East. Initially, I used to think that they are people from another world, the kind of which I cannot even think of turning into. But my views have changed over time. In screen-writing, Vince Gilligan, the creator of “Breaking Bad” and other show-runners like him have started inspiring me. I have also started to feel that theirs is the kind of work I can also do if I make an effort.

Your most popular serial has been a horror one. Writing something horror means that you take a special interest in the genre. Tell us about your liking for spooky stuff.

To be honest, I hate this genre. I haven’t watched more than three horror movies in my entire life. I am into thrillers and romances instead. I wrote “Belapur Ki Dayan” because horror is a genre every writer takes up in his or her career in order to give out the impression that he or she can write something novel. It also gave me a chance to put aside a saas-bahu story and develop on something else. Also, since Momina had asked to write three projects for her, I experimented on one of them and turned it into a horror story to get attention for having written something off-beat.

Drama is a very technical genre. Did you learn screen-writing first or did you polish the craft with the passage of time?

My interest in Urdu and English Literature and my training in the field of Theatre helped me a lot with the genre, and I also polished the technicalities over time. I am always open to learning. I read a lot of scripts. From story-telling to the creation of structure, one gets to learn a lot if one reads. Subjectively speaking, a drama serial takes three to four years to be formed in my head before actually coming to life. In this way, I have answers to all the situations that come up while I am writing. If the stories have not been completely imagined and created in the mind first, I find myself in quizzical situations. Now I wish to properly study screen-writing as a subject. It’s not as simple as we think it is. A lot of effort and internalization of the art is required in order to produce stuff in accordance with the international standards. I don’t consider myself a blessed person who does not need to learn. I definitely need to learn the art first.

‘If I could write a quality novel or short story, I would have done that as well. As far as inspiration is concerned, Classical Literature has always inspired me, be it of the West or of the East. Initially, I used to think that they are people from another world, the kind of which I cannot even think of turning into’

Do you feel you will be able to dramatize the story which is closest to your heart for television, or will it remain unwritten?

That requires a lot of courage, and I don’t feel that I am courageous enough. I also don’t consider any aspect of my life dramatic enough or larger than life to be put into words. But we, the dramatists of Pakistan do take the people around us as inspirations for our characters, for that is what we are asked to do by the content heads; observe and create characters that are relatable to everyone. I therefore closely observe the people around me. I listen to them, take notes of their actions and try to remember the statements which I feel contain wisdom.

How do you decide between creativity and commercialism?

This has remained quite a big problem for me, and I wasted a lot of time thinking that creativity surpasses everything. But if you stick to such a view, you may write a novel and then just sit down without caring if it’s sold out and read or not. But now I do understand that creativity and commerce have a deep connection, and people from both the fields should not despise each other. I need commerce in order to tell my story and commerce needs a good story to sell out stuff. So, it’s a give-and-take relation between the two. We also need to understand that television is not a medium for airing stuff that is creative to such an extent that it becomes incomprehensible for the majority. It’s a mass medium and your purpose should be to address the majority of the people out there. You cannot imagine yourself as Sartre or Kafka while working for television. When you come to terms with this idea, your life becomes comfortable. I now strive to keep a balance between commercialism and creativity and try to create stories that may touch the viewers. I do want people to watch my plays. Therefore, I don’t fight with television teams anymore over subjective stories that are appealing to me alone. But yes, Momina Duraid is one such producer who allows me to deal with the story in my own way and also keep the commercial aspect intact. Therefore, I love working with her.

Tell us about your upcoming projects.

Two of my serials are under-way. One’s shoot was about to begin that Covid-19 hit the world. The other one will be supervised by Saif e Hassan. Both are MD Productions’ projects, one being an issue-based serial and the other being a romantic one. I have written both of the stories out of much love. I am also working on my dream project, inspired by Shakespeare’s work. From his trilogy, I am taking “Hamlet” first of all and adapting it for television. My purpose is to bring stories from Classical Literature to television. While this idea is still going on in my mind, my written projects which will soon be on screen are the two I just mentioned, one titled “Be-adab” and the other titled “Yaadon Ki Baraat”, the former directed by Shehzad Kashmiri and the latter by Saif e Hassan.

Lately, Inam Hasan has also started a writing agency by the name of “Script Wala”, on which he is working along-with his wife. The purpose of the agency is to create a writers’ room inspired from the West in order to give birth to ideas and discuss them at length. The Facebook page of the agency has already started airing interviews of the veterans of Pakistani drama industry, such as Talat Hussain, Marina Khan and Kamal Ahmad Rizvi (late).