Nasir Khan was one of Pakistan’s first filmy hero

* Earlier, Nasir Khan had made his acting debut in 1945 with the film 'Mazdoor' in which director Nitin Bose had discovered him as a young handsome man 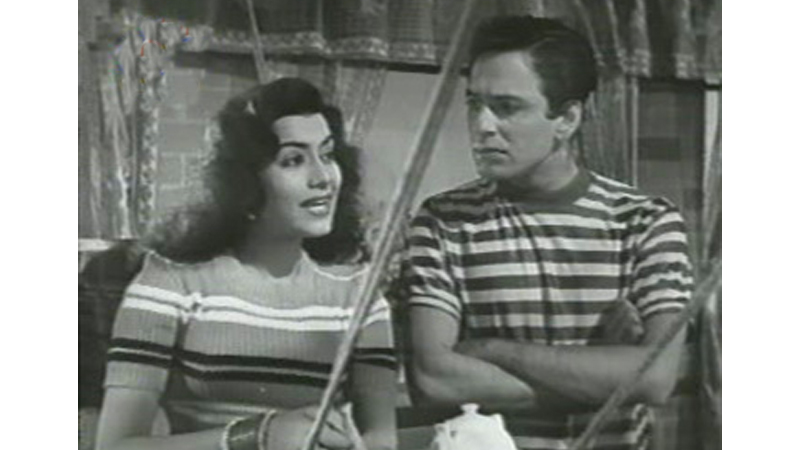 Whenever I think of veteran Indian actor Dilip Kumar, his younger brother Nasir Khan comes to my mind.

When Nasir Khan comes in my mind, three songs by CH Atma from 1951 film ‘Nagina’ come in my mind, that were filmed on him. Though I had seen this film five and a half decades ago, I saw it again recently on net. The black and white film in a bad print further added to my misery despite that it was produced by Dalsukh M Pancholi, Indian film maker and distributor at the time of Partition. Made as a mystery movie, it seemed to fail the expectations of the film goers after the success of Kamal Amrohvi’s ‘Mahal’ in 1949. The redeeming factor was Nasir Khan’s physique, and facial expressions. His eyes were fully exploited by the director especially on C. H. Atma’s songs ‘Aikh Sitara Hei Aakash Main’, ‘Dil Beqarar Hei Mera Dil Beqarar Hei’ both penned by the poet Shailender and ‘Roun Main Sagar Kei Kinare’ penned by Hasrat Jaipuri. The music director was Shankar Jaikishen duo. Heroine Nutun looked frail in the film perhaps as she had recovered from tuberculosis at that time but she bagged three beautiful songs ‘Tu Nein Haye Mere Zakhm-e-Jiger Ko Choo Liya’ (poet Hasrat Jaipuri), ‘Yaad Aai Hei’ and ‘Kaisi Khushi Ki Hei Raat Balam Mere Saath Jiya Lehraye Re’ both penned by Shailender. After this musical success one would have expected Nasir Khan’s graph to rise but that was not to be. Perhaps Dilip Kumar was already a star in the making in those days or due to Nasir Khan’s unsettling attitude and domestic troubles.

Earlier Nasir Khan had made his acting debut in 1945 in the film ‘Mazdoor’ in which director Nitin Bose had discovered him as a young handsome man and people had prophesied that he shall excel Motilal’s popularity at that time but he had shifted to Lahore after partition and starred in the first ever Pakistani film ‘Teri Yaad’ in 1948 with Pakistani actress Asha Posley as heroine. She appeared in side roles or as a vamp in the subsequent films. In Radio she would sing by her name Riffat Ayesha.

Before proceeding ahead, we must comprehend the difficulties under which the first Pakistani film was made. According to Wikipedia “During this the time of creation of Pakistan, the Indian film industry was segregated and the only film production centre left in Pakistan was at Lahore. With the industry reeling in its infancy, it was hard to work on film productions that had been initiated before the partition as many of the working filmmakers and actors had left for or stayed back in India. With many hardships, the new film industry was able to release its first feature film, Teri Yaad (1948) on 7th of August 1948, premièring at the Parbhat Theatre (later known as Sanober Cinema on McLeod Road) in Lahore. It starred Asha Posley and Nasir Khan, brother of renowned Indian actor Dilip Kumar who had stayed back in Bombay, India. The playback soundtrack was written and composed by Inayat Ali Nath. Produced by Dewan Sardari Lal’s Dewan Pictures and directed by Daud Chand, the film stayed for a significant time on the celluloid screens in Lahore, Quetta and Dhaka, Pakistan”. The cast was Jahangir Khan, Rani Kiran, Sardar Muhammad, Ghulam Muhammad, Najma, Nazar, Asha Posley, Nasir Khan, Ghulam Qadir, Ragni, Shakir and Shola. Cinematography was by Raza Mir, Asid Raza Mir’s father and Ahad Raza Mir’s grandfather. Music Composer Bhai Inayat Ali Nath was Asha Posley’s father and many years later she fondly hummed her song ‘Teri Yaad Aye’. Rani Kiran who in actual life was Asha Posley’s sister also played the role of her sister in the film. Unfortunately, not much information is available on Nasir Khan’s performance in this film except that since this and the next film ‘Shahida’ (1949) didn’t do well at box office he returned to Bombay in 1951.

Nasir Khan resumed his acting career in Bombay and acted in some films including ‘Nagina; as elaborated above. His acting career spread over 1950s. After ‘Mazdoor’ he acted in films namely Hungama, Nakhre, Khazana and Shreemati Ji. 1955 film ‘Jawab’ with Geeta Bali, Balraj Sahni and Naushad Ali’s music left a mark.

When Nasir Khan acted in the film ‘Aasmaan’ film goers commented that he was finally out of influence of his brother Dilip Kumar and had found a niche for himself. It was a well-supported film as far as Nasir’s co-stars are concerned; He worked with Shyama, Lalita Pawar, Veena, David, Anwar Hussain and Badari Parshad with Asha Parekh as child star. With O. P. Nayar’s music Geeta Dutt’s song ‘Daikho Jadu Bhare More Nain’ became popular with Prem Dhawan’s lyrics. Her song ‘Dil Hei Diwana’ needs to be mentioned. It seems a club type sequence. Unlike general folk-oriented style of OP Nayyar, this was a thumri-influenced song. C. H. Atma sang a sad melody ‘Raat Suhaani Hanste Tare’ in his deep voice, well suited to Nasir Khan Style in those days. He rendered another song ‘Kachhu Samajh Nahin Aaye Mohey’ penned by Prem Dhawan. It was Dalsukh M. Pancholi Production.

1956 film ‘Chaar Minar’ with Nasir Khan was an interesting film with wide-eyed Jabeen Jalil as heroine. Music was by Sardul Singh Kuatra.

Before proceeding ahead, we must comprehend the difficulties under which the first Pakistani film was made. According to Wikipedia, ‘During this the time of creation of Pakistan, the Indian film industry was segregated and the only film production centre left in Pakistan was at Lahore

The 1961 blockbuster film Ganga Jamna is said to be inspired by Mehbbob Khan’s Mother India 1957. Dilip Kumar allegedly ghost-directed the film, as well as did the ghost-editing. The film stars real-life brothers Dilip Kumar (real name Muhammad Yusuf Khan) and Nasir Khan in the roles of the brothers Ganga and Jamna, respectively. The film had a very sensitive plot in which Ganga is killed by Jamna. Ganga’s death rendered more poignant by the fact that it was his money that paid for Jamna’s education and allowed him to become a policeman. It is a story of two brothers who grew up in a village which had control of a malevolent landlord. When Ganga is framed by the landlord for a crime that he had not committed, he escaped to the mountains with his girlfriend, Dhanno. They join a band of bandits. His younger brother, Jamna, is sent to the city for his education and becomes a police officer. Years later, when Ganga is about to become a father, he decides to return to the village to ask for forgiveness. However, Jamna wants him to surrender to the police for his crimes and when Ganga refuses and tries to leave, Jamna shoots him dead.

After this film Nasir Khan had more offers to act but by then he had started losing his hair due to some strange disease. He said that he managed with a wig in Ganga Jamna but he would go like that in the other films. So he refused the offer just when his struggle was paying him dividends.

Nasir Khan was born on October 01, 1924 in Bombay and is 21 months younger to Dilip Kumar (Yousuf Khan) in a family of 6 brothers and 6 sisters. Nasir Khan always lamented that his mother had died in 1948 and he could not be present on her funeral. He also regretted that he was not present when his father Ghulam Sarwar Ali Khan too died. Nasir’s initial studies were at Deolali’s school and then in a school in Bombay. When his film career had just taken a kick start, he got married to Suraiya Nazir, daughter of film maker Nazir. Out of this wedlock they had a daughter Naheed Khan. The marriage did not last long. His second wife was lovely actress of that time Begum Para in 1958. He had three children; Nadir Khan (who has passed away), a daughter namely Lubna and actor Ayub Khan. Nasir Khan developed Alopecia and lost his hair and eye brows. This caused his acting career to end. He was directing a film titled “Zid” starring Sanjay Khan and Saira Banu after having invested all his life’s earnings but after he passed away on May 03, 1974, the film was shelved. Overall he had a troubled life. 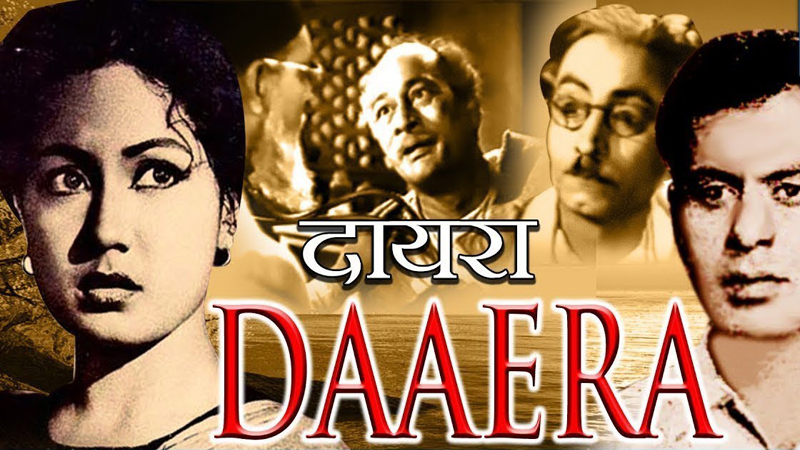 Some other films not mentioned above in which Nasir Khan acted are: