Federalism in Pakistan — ‘our federalism’

There is no set definition of federalism. Its concept and practice vary in different political systems and also within the same political systems at different times. Perhaps this is why, in the USA – the world’s oldest democracy – one of the associate justices of Supreme Court (Justice Hugo Black; in office from 1937 to 1971) invariably emphasized in his judgments on the federal questions that it was ‘our federalism’ about which he was speaking!

Federalism in Pakistan has characteristics that are associated both with unitary and non-unitary forms of government. At the start, the Constitution proclaims that ‘Pakistan shall be Federal Republic to be known as the Islamic Republic of Pakistan’ (Article 1). But then, almost immediately thereafter (in Article 3) it goes on to provide that ‘Majlis-e-Shoora (Parliament) may by law admit into federation new states or areas on such terms and conditions as it thinks fit’. Thus, Article 3 stands as the textual refutation of the assumption that Pakistan’s Constitution is federal.

The need of the hour, however, is new judicial thinking on the issue of federalism

In a federal structure, states are like juristic personalities processing properties and functioning through instrumentalities created through the Constitution. But prior to the 18th Amendment, the federal structure envisaged by the 1973’s Constitution had a strong bias towards the Center. However, the 18th Amendment finally abolished the concurrent legislative list (subjects in the domain of both provincial and federal governments) in 2010, and debiased the federal structure to much extent. Its aim was to maintain the balance of federation, however, such a fine and noble sentiment is not so far heeded in the politics of Pakistan. For example, power was devolved from center to the provinces but provinces failed to delegate it further to local governments. 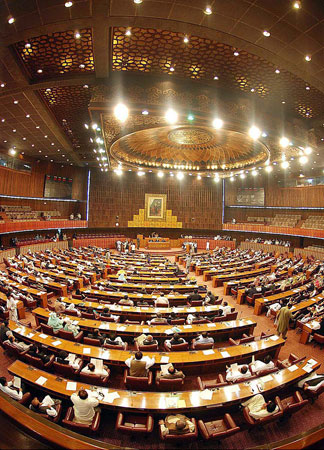 Even so, the 18th Amendment was an extraordinary constitutional development, and breathed new life into our federation.

Under our system the supremacy of the constitution is protected by an independent judicial body (the Supreme Court) that is empowered to act as the final arbitrator in a scheme of distribution of power between Center and the provinces. There is no remedy when the highest court acts with JUSTICE on its side even though be in apparent disregard of constitutional provisions! At this level the plaintive query in the Latin quote, Quis custdiet ipsos custodies? (Who will guard the guardians?), gets answered as follows: by the wisdom and good sense of the guardians themselves!

In Pakistan, these have been the emerging trends – in our federalism – since the very beginning.

Consider, for example, the Supreme Court’s jurisprudence in terms of the interpretation of the 18th Amendment – a candidate for the most powerful tool to sustain our federation. In Sindh vs Nadeem Rizvi, a bench headed by CJP Saqib Nisar ordered the transfer of JPMC, NICVD and the National Institute of Child Health from Sindh and the Sheikh Zayed Hospital from Punjab to the center.

Before this was Imrana Tiwana case in which Justice Saqib Nisar undid the verdict of Justice Mansoor Ali Shah who restored the utility of Article 140 while highlighting the responsibility of provincial governments to create functioning local governments. Then, there was another case called Sui Southern Gas vs Federation of Pakistan in which the Supreme Court dismissed a challenge to the constitutionality of the Industrial Relations Act, 2012 by holding that the law has been validly enacted by the federal legislature. Moreover, the Supreme Court gelded the Council of Common Interest in PMDC vs M. Fahd Malik.

Besides this, financial dependency on the Center has been so far one of the main disincentives to the working of federalism in Pakistan. Amidst the current calls for reworking/rolling back the 18th Amendment, the question about the future of our federalism becomes more relevant, for the future stability of our diverse country depends upon the adherence to the federal principal. In this context, the greater financial independence on the part of the provinces will necessarily herald less political dependence on the Centre. And such a change will, in turn, get slowly reflected in the views of provincial representatives in the Parliament.

The need of the hour, however, is new judicial thinking on the issue of federalism. The concept of united Pakistan is praiseworthy, but the combination of strong Centre and weak provinces has not worked effectively as it was expected to do. We must realize that, in the long run, it is only strong and self-reliant provinces that would go to make a powerful Pakistan.