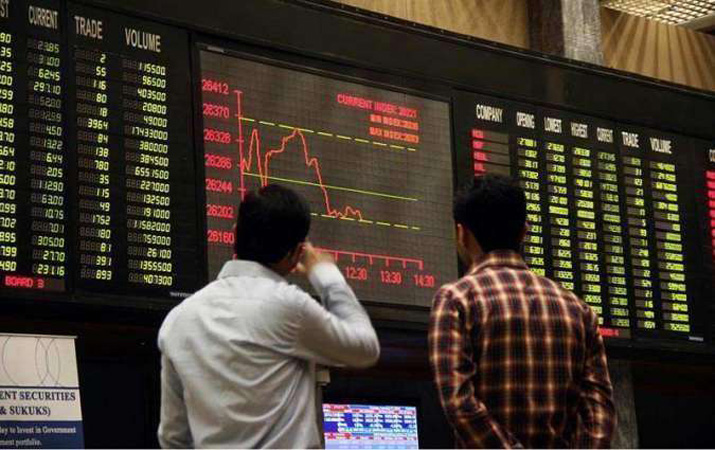 Pakistan stock exchange continues to battle against covid-19 pandemic and its economic fallout, as stocks continue to shed value despite series of stimulus measures by government and State Bank of Pakistan.

Irfan Saeed, Senior vice president, BMA capital noted that on the contrary the market is expected to rebound in the following weeks due to multiple reasons. Mr Saeed said Government’ decision to cut profit rates on National Savings Certificate will pick up market sentiments in the following sessions, and will push fresh rally in the stocks with high yeild. According to a notification issued in this regard, the profit rate has been cut by 1.86% to 8.54% on defense certificate, and by 1.92% to 10.32% on Behbood and Pension Certificates.

During the session Oil & Gas Exploration Companies led the initial rally adding 29 points to the index. US West Texas Intermediate crude oil surged as much as 9% on Friday as investors turned back to the embattled commodity market. Contracts for June delivery traded as high as $17.95 per barrel before paring some gains later in the day. The jump follows a similar move on Thursday, marking a brief rally to close a volatile week. International benchmark Brent crude oil price, traded as much as 6.4% higher to $22.70 per barrel. Oil prices picked up the pace after US President Donald Trump’s tweet warning the US will shoot down and destroy Iranian ships threatening American vessels. Oil’s end-of-week leap can merely be a dead-cat bounce before markets descend again.

Among other sectors that tries to lift the index includes Power Generation & Distribution with 20 points, Technology & Communication with 12 points, Automobile Parts & Accessories with 9 points and Automobile Assembler with 6 points.

Global Markets: Global Stock Markets were battered on the last trading session of the week, following speculations over a failure of covid-19 vaccine. Risk sentiment took a hit late after a report in the Financial Times, citing documents accidentally published by the World Health Organization, said that drug remdesivir from Gilead had failed to improve patients’ conditions. Gilead noted that study was “terminated early due to low enrollment,” leaving it “underpowered to enable statistically meaningful conclusions. As such, the study results are inconclusive.” Major European stock markets edged lower as major benchmark lost steam. UK’s FTSE-100, CAC-40 in France and Germany’s DAX closed lower.

Meanwhile in US Wall Street struggled to keep up the pace as further 4.4 million Americans sought unemployment benefits last week as the economic toll from covid-19 pandemic continued to mount. The new applications brought the total number of jobless claims since mid-March to 26.4 million. At the highest of levels of unemployment following the 2008 financial crisis, there were 15.3 million jobless Americans. But in the past five weeks a staggering 26.5 million workers have already filed jobless claims. In just five weeks, the surge in unemployment claims has exceeded the number of jobs created in the near-decade of expansion that ended in February. International Monetary Fund has already projected US economy to contract 5.9% this year. In a bid to mitigate economic fallout of Covid-19, US government has responded to the crisis with over $2 trillion in relief, expanding eligibility for unemployment benefits and increased the payments, among other measures.