Coronavirus, a microscopic germ, has literally brought our so-called advanced human civilisation to a grinding halt. The pandemic has pushed humankind in the age of neo-wars, characterised by non-military threats, notably pandemics and climate change.

Amid the surging death toll and the consequent disruption in human life, from economy to religion, all stand corona-ised. From individuals to nations, all stand quarantined. Both laymen and leaders are struggling to figure out what and why it has struck them so suddenly, swiftly, comprehensively, and conspicuously. Some are trying to find answers in their belief in the wrath of God, whereas others are finding solace in common sense defying conspiracy theories.

The global bewilderment is rooted in our general ignorance about the history of the evolutionary battle between microbes and humans. The current pandemic is neither the first nor the last as the clash between germs and humans is a part of the relentless evolutionary process that obliges microbes to infect, reproduce and spread to survive. In response, humans evolve their countermeasures to kill the deadly germs with antibiotics or antivirals.

Like any contagion, the coronavirus will recede after peaking, leaving us with ample time to pause, reflect and change to be better prepared for next time

Comparatively, the death toll caused by the coronavirus is insignificant so far. However, COVID-19 is taking an unprecedented psychological, political and economic toll, owing to a highly globalised world underpinned by greater economic interdependence and digital connectivity that are turning to be its Achilles’ heels. A global lockdown means disruption in the global economic chain and consequent economic slowdown, threatening people with the scary spectre of job losses and decline in living standards. Thanks to social media, the pandemic of panic and uncertainty has proliferated faster and wider than the virus. 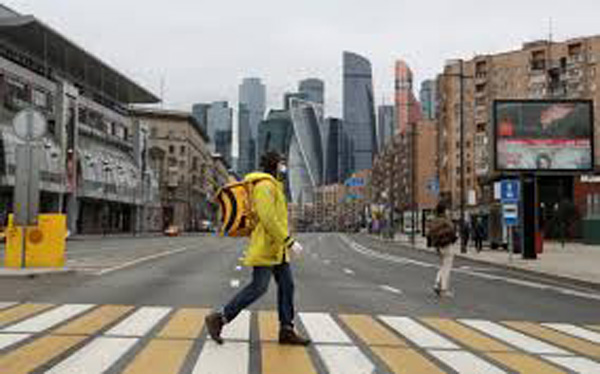 The post-World War II period witnessed a significant reduction in interstate conflict in addition to rapid advances in science and technology, leading to greater material abundance and affluence. The majority of the people alive today were born after the last World War and were born amid abundance and a more stable world with no exposure to or awareness of past upheavals. We have grown up addicted to a modern way of life and luxury made possible due to our ruthless exploitation of natural resources, which is ecocide, to be precise. We were misled to believe that this party could not be over until we were hit hard by the contagion. Now our misconceptions about human invincibility and primacy are crumbling before us.

Due to the fear of infection, we are afraid to touch the very gadgets that define and drive our modern life. The contagion has injured the collective human ego and vanity, leaving us impeccably stunned. We are unable to reconcile ourselves with the novel and nightmarish scenario unfolding in slow motion, like a Hollywood thriller.

The splitting of atom, missions to moon, elimination of certain diseases, increased human longevity, and greater food production were mistaken for human conquest of nature. Arbitrarily, humankind proclaimed itself as the “crown of the creature” resulting in misleading triumphalism, fuelled by material advancement. Challenging our crown, the coronavirus has shocked us out of smugness and shattered our illusions about homo sapiens’ triumph and supremacy on the planet.

The reason why the global community is finding it hard to fight off the viral challenge is not because it is deadlier than the past pandemics, but because we have been caught unprepared, clueless, and ill-equipped despite having better technology than before. The coronavirus has exposed the hollowness of our moral conventions, religious institutions, politico-economic structures, so-called national security, popular leadership, technological prowess, and medical science, all of whose direction and thrust have turned out to be misconceived and misfocused.

Militarily, the world may be better equipped and prepared to repel an alien attack than fighting off the coronavirus invasion. The data from the Stockholm International Peace Research Institute reveals that the total world military annual expenditure is around US$1,822 billion, whereas the global health annual spending is about US$ 7,800 billion. Seemingly, the world health budget outweighs the global defence allocations. The total world population is over 7 billion souls whose good health is to be ensured by US$ 7,800 billion, whereas US$1,822 billions are spent on overall requirements of merely 27,414,000 armed forces personnel maintained for state security. Tellingly, the statistical juxtaposition lays bare the serious inadequacy of global health budgets considering the size of the world population and vitality of human health.

Ironically, poor nations like India and Pakistan, with shabby health infrastructure, never tire of bragging about their sophisticated nuclear doctrines and nuke stockpiles, gathering dust at the cost of human security of the millions of people perennially afflicted by hunger, poverty, and ignorance. Generally, nations are oversupplied with nuclear doctrines and national security strategies, but lockdown plans are insufficient. What nations have are modern muskets not masks; nuclear weapons not ventilators; bunkers not hospitals; armoured vehicles not ambulances; soldiers not doctors, nurses and policemen, who have emerged as the neo soldiers in this neo-war.

Humanity’s war on the coronavirus is more complex than war on terror. The vulnerability of an underpaid, under-protected and overworked doctor, nurse or policeman to the virus during long duty hours and direct exposure is far greater than that of a soldier to an enemy bullet or bomb.

Like any contagion, the coronavirus will recede after peaking, leaving us with ample time to pause, reflect and change to be better prepared for next time. Humanity needs a radical shift in its infected intellectual approach to mother nature on which we are helplessly dependent rather than being its masters. We are just one of the millions of species on this tiny blue dot of dust we call Earth, suspended in infinity of universe. The party is over, and it will never be business as usual. In the contemporary age of human caused sixth mass extinction and climatic turbulences, the future of humanity hinges on the choices we make in the post-coronavirus world. A peace accord with nature, forensic reviews of politico-economic and religious institutions, reorientation of science and technology, sustainable development, prioritisation of human security, healthy health infrastructure, and population control are some of the wise measures expected of us, the homo sapiens, the so-called wise beings. The real enemy is not the coronavirus; humanity has to be saved from humans as our insatiable desire for more and more is unnatural, unsustainable, and suicidal.

The writer is a PhD scholar and can be reached at mahar.munawar2017@outlook.com and on Twitter @MunawarMahar