* Dr Firdous says Sindh CM has powers to impose curfew in province but at the same time he is responsible for protection of rights of the people
* Instead of focusing on building his media image, Shah must take steps to eradicate poverty and hunger in Sindh 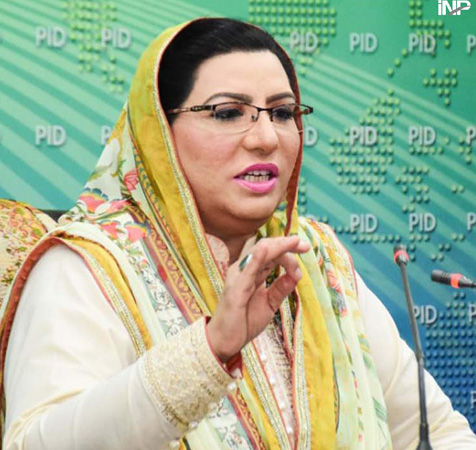 Special Assistant to Prime Minister on Information and Broadcasting Dr Firdous Ashiq Awan Wednesday said the political leadership in Sindh is ‘engaging in divisive politics’ at a time the country is battling the coronavirus outbreak. “Sindh government representatives are just dividing the nation,” she told a press conference in Islamabad along with Pakistan Tehreek-e-Insaf’s Central Vice President and parliamentary leader of party in Sindh Assembly Haleem Adil Sheikh.

However, at a separate press conference in Karachi, Sindh Chief Minister Murad Ali Shah once again called for the provincial and federal governments to get on the same page to tackle challenges arising out of the coronavirus epidemic in the country.

Dr Firdous said Sindh chief minister is fully empowered under the constitution to take decisions about easing or extending the lockdown in the province, but as the chief executive of the province, he is also responsible to save the vulnerable segments from unemployment, hunger and starvation. She said during the National Coordination Committee (NCC) meeting chaired by Prime Minister Imran Khan, decisions were made in consensus, and for the sake of national unity, the prime minister authorized the provinces to take their own decisions regarding lockdown and opening of low-risk industries to provide employment to daily-wage workers.

She said Prime Minister Imran Khan is fully cognizant of his responsibilities and taking along all the federating units to successfully surmount the challenge. She said the federal and provincial governments would have to work together to cope with the coronavirus challenge. She said all other provinces accepted the decisions made in the NCC meeting but unfortunately Sindh government spokesman, also a provincial minister, made a controversial tweet which is an effort to divide the nation at this critical juncture. She said time and again, the Sindh government was informed during the meetings of NCC that the provinces are free to take decisions in the larger interest of the people of their respective provinces keeping in view ground situation.

She said the rulers should give hope to the people but in his press conference, Syed Murad Ali Shah appeared pessimistic which may create fear and panic among the people of Sindh. She reminded the Sindh chief minister that he has the powers to impose curfew in the province under the constitution but at the same time he has responsibilities to protect the rights of the people of the province. She said if the Sindh government fails to provide ration to the poor segments of the society, it will mean that the lockdown was imposed to protect the rights of the upper class and to promote his image of ‘good boy’ in the media.

Dr Firdous said the federal government is ready to cooperate with the provincial government in the process of providing relief to the poor segments of the society and Ehsaas Emergency Cash Programme is its manifestation as disbursements are being made in all provinces including Azad Kashmir and Gilgit Baltistan. She said the federal government announced Rs1200 billion relief package after the spread of coronavirus, whereas the Sindh government did not announce any relief package for vulnerable segments of the society.

She asked Murad Ali Shah that instead of focusing to build his media image, he should look at the poverty and hunger on the ground and take measures.

She said the picture of Qauid-e-Azam was published on the boxes of relief packages given by the federal government as this was not the time of political point-scoring but serving the masses. She said the Prime Minister Imran Khan wants to take all provinces with him in fight against the coronavirus as the government has been fighting on two fronts, one of controlling coronavirus and the other to protect the people from hunger and starvation.

Haleem Adil Sheikh said PTI is in the opposition in Sindh but it wants to cooperate with the government of the province at this critical time. He asked Sindh chief Minister that instead of holding lengthy press conferences, he should perform practically on the ground. He said the Sindh government should disclose where it has distributed relief goods worth billions of rupees. He said Bilawal Bhutto Zardari should know that health sector is a provincial department and the PPP is ruling the province for past 12 years but health infrastructure is in very bad shape.

Earlier in the day, Sindh chief minister called for the provincial and federal governments to get on the same page to tackle challenges arising out of the coronavirus epidemic in the country. “During our meeting with the federal government, we asked for a uniform policy to deal with the situation,” he said while addressing a press conference in Karachi, adding that there were some issues that the provinces and the federal government did not agree on. “Some provinces and the federal government agreed that some essential workplaces should reopen. We did not agree to open shops for barbers, plumbers, electricians, etc,” he said. “We did, however, agree that plumbers and electricians – those travelling to homes to provide services – be allowed, provided they are following the SOPs issued by the government,” he said. “We all agreed to restart the automobile sector and domestic flights with the implementation of decided SOPs. We, however, suggested that the federal government wait for another two weeks before resuming domestic flight operations,” he said. “We cannot understand the need to open the construction sector at the moment,” Shah said, referring to Prime Minister Imran Khan’s decision in this regard.

“In light of recent numbers, there may be a need for stricter implementation of the lockdown in the coming days. We have told the federal government about imposing strict measures,” he said. “On the prime minister’s directives, the provincial governments will open construction sites after ensuring SOPs are being followed,” he said. “Those workers aged more than 55 years will not be allowed to enter construction sites as per the guidelines. Workers will work in different shifts to ensure that no workplace is overcrowded at any time of the day,” he added.

Speaking about an announcement by religious leaders and traders that they would no longer abide by lockdown guidelines, the chief minister said, “We will facilitate ulema and traders in this regard by meeting them and keeping them in the loop for all discussions. I would like to thank the ulema and traders for cooperating with us [so far]. I would also request everyone to cooperate and extend their support by staying at home for the next two weeks. I repeat: please be careful with the elderly people in your family. For their safety, limit your interactions with them and avoid exposing them to the virus.”

Responding to criticism regarding the cordoning off of some areas of Karachi to stem the spread of the virus, Shah said the provincial government was unnecessarily targeted for taking such extreme measures. “I would like to apologise for the confusion created by the numbers and outdated district information. We are trying our level best to take measures with the information we have in hand,” he added.