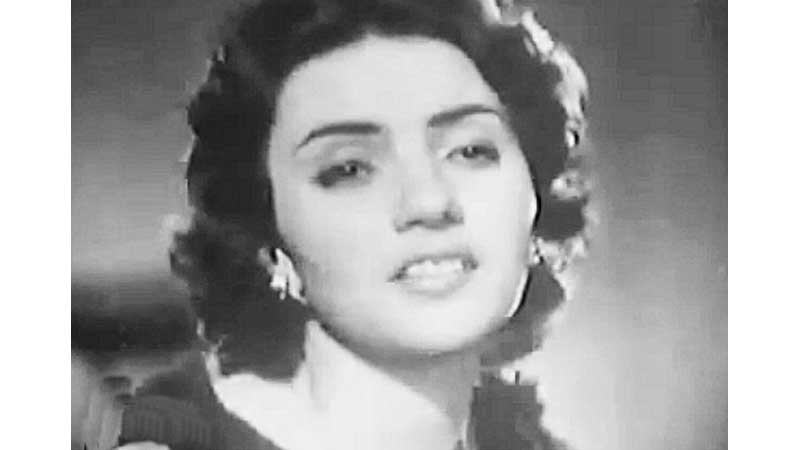 It was in Khwaja Khursheed Anwar’s film ‘Jhoomer’ that I first got introduced to the talent of Pakistani actress Rakhshi. She played the role of a wrongly brought-up girl in Western style by a hired Nanny in a mother-less family. Not being able to control her habit of staying late from home in a night club, she argues with her father who gets heart attack. Dejected, he finds a solution in marrying her off to Akhtar Mirza, his employee, a role played by Sudhir. She arranges a modern party with drunken guests at her home but her husband revokes it. Now she rebels against him again and goes to a night club, dances with another male-friend on a song ‘Waqt Hei Buhut Hi Kum’. Her husband comes after her and kicks off all the dancers from the premises. She runs off towards the balcony and falls off accidentally and dies. These first few minutes of the film revolve around Rakhshi’s acting, dialogue delivery and dance movements. She looks slim, smart and appealing in the thin dresses she wore; dresses not acceptable in the society at the time of making of this film, unlike today. Movie ‘Jhoomer’ was 1959 film directed by Masood Parvez starring Musarrat Nazir, Sudhir, Allaudin, Rakshi, Azurie and Laila. Rakhshi made a mark in this film through a brief but effective role.

Entry in films – Rakhshi was an early entrant in Pakistani films in 1950s though she had already given appearance in 1947 film ‘Director’ made in United India. About her entry into films she narrated an incidence to Guddu Archives that she along with her friends had gone to see a shooting of Anwar Kamal Pasha’s film ‘Dulla Bhatti’. As the luck would have it, the dancer Nadra did not appear on the sets. Rakhshi was of bold and naughty nature. She was coaxed by her friends to go and offer her as a substitute dancer before Anwar Kamal Pasha. He looked at Rakhshi and smiled but did not respond thinking that she was just and college student and not a trained dancer.

Rakhshi has been a dress designer also. Her real name is Parveen. Though she was born in Lahore she had her early education; Senior Cambridge, in Dehradun’s St. Tennies school. Rakhshi disclosed in an interview with Guddu archives that her father expired three months before her birth.

Rakhshi was the first of Western type dancers from Christian Community. Neelo came much later but after minor roles established herself as a top-class heroine. There were other dancers that followed like Aimi Minwala, Zareen Panna, Niggo, Cham Cham or Farida but they could not make a niche for themselves except Aimi Minwala and Zareen Panna. The closest I can refer to Rakhshi is in the category off Sheela Ramanai from Bollywood in those days. The latter visited Pakistan and starred in Pakistani film ‘Anokhi’. Rakhshi acted in 1958 movie ‘Aadmi’ which was released on November 14 that year. Songs were sung by Nahid Niazi in the music of Muslehuddin.

Rakhshi stood fast and waited patiently. Anyhow, the background song was played and she gave dancing movements. That is how Rakhshi entered film line and never looked back since then. She was very happy to see her fans around her when she went to see her film in cinema house

Rakhshi has been type cast as a dancer in her films. She was not given acting roles as her pronunciation was western and then she did not prefer acting much. She found her work the best in Jago Hua Savera and Neend. For the former movie she had to visit London the help the British editor in editing. For the latter she liked Hassan Tariq as director (for the films Tehzeeb and Umrao Jan Ada he looked at the minor details before shooting. Rakhshi used to ignore minor incidences during shootings. She and Aimi Minwala went off well with each other. Everybody remained busy professionally.

According to Site Cineplot and the word of mouth, Rakhshi ended up marrying a very rich gent. In the late 1960s, her daughters were studying at St. Denny’s college – Murree and she was trying to bring them into this profession by turning them into professional dancers much against the wishes of her husband.