Where there will be suppression, needless to say, there will also be the resistance. Aurat March is the movement for the rights of women who have been suppressed since time immemorial by the deeply embedded patriarchal social structures. This movement seeks to break the patriarchal manacles which have hindered women from realising their full potential. In other words, male chauvinism is the root cause of women’s suppression and social injustice against the 50 percent of population. Aurat March is indeed a movement for social justice and equality.

Undoubtedly, women, who make 50 percent of the population of world as well as Pakistan, have suffered immensely under the male-dominance rule. Though women have achieved significant milestones, however they have yet to continue their struggle for equality and protection of their rights. For instance, violence against women is on the rise such as incidences of rape, domestic violence, child marriages, etc. Victims are even pressurised by their family members to not seek legal recourse as they view that it will bring bad reputation to their family/tribe.

Injustice anywhere is a threat to justice everywhere

To understand the purpose of the Aurat March, let us have a look at the shocking statistics in this regard. According to statistics collected by White Ribbon Pakistan, women’s rights organisation, one out of five women in Pakistan faces domestic violence and the ratio has alarmingly increased by 20% in recent years. Moreover, Pakistan ranks sixth on the list of the world’s most dangerous countries for women. Keeping in view that alarming situation, can one ask justification for creating hurdles from the detractors of Aurat March? The report further continued that “4,734 women faced sexual violence between 2004 and 2016 and over 15,000 cases of honor crimes were registered. There were more than 1,800 cases of domestic violence and over 5,500 kidnappings of women during this period.” Despite the fact the parliament and the provincial assemblies generously passed pro-women laws, nonetheless the violence against women has been on the rise as recorded by the White Ribbon Pakistan.

Additionally, the World Economic Forum (WEF) released its 2020 Global Gender Gap Index report that ranked Pakistan 151 out of 153 countries. Based on four indicators, the WEF ranks the countries accordingly. Pakistan was placed at 150 in economic participation and opportunity, 143 in educational attainment, 149 in health and survival and 93 in political empowerment. Pakistan only managed to surpass the war-torn Iraq and Yemen. Ironically, Pakistan has drastically slipped from 112 in 2006 to 151 in 2020. In spite of the fact Pakistan progressed in the terms of gender equality, such as Benazir Bhutto became the first ever women head of government of the Islamic World, surprisingly, instead of improvement of the situation, over the course of time, it has further deteriorated.

Therefore, Aurat March was a movement for the attainment of women’s rights and seeking protections against the injustices and violence perpetrated against the women. It was a march to tell their male counterparts and the stakeholders that women have yet to be provided with the fundamental rights, including the right to March under the Article 15 (freedom of movement, etc.), Article 16 (freedom of assembly), Article 17 (freedom of association) and Article 34 of the Constitution that explicitly directs the state to take appropriate measures to enable women to participate in all spheres of life and social activities. In addition, the march aimed at reminding the stakeholders for the implementation of the dormant laws such as the Domestic Violence (Prevention and Protection) Act, 2013; the Sindh Child Marriage Restraint Act, 2013; Sindh Reproductive Healthcare Rights Act, 2019; Commission on the Status of Women Act; Enforcement of Women’s Property Rights Act, 2020; Sindh Bonded Labour System (Abolition) Act; and the Protection against Harassment of Women at the Workplace Act, 2010, etc. 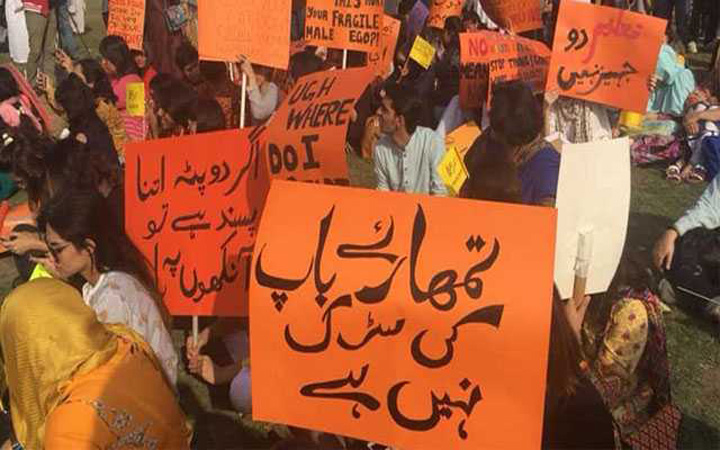 In addition, Pakistan is signatory to the international agreements/treaties, etc. such as the Convention on the Elimination of all Forms of Discrimination Against Women, International Covenant of Civil and Political Rights, International Covenant on Economic, Social and Cultural Rights (ICESCR), Sustainable Development Goals (SDGs) etc. Thus, the marchers are not demanding anything illegal/unconstitutional, but indeed the implementation of the constitutional provisions, the laws passed by the parliament and the provincial assemblies and the international treaties to which the country is a signatory. Logically, no sane person should be opposing any march for the protection of the rights of women.

If the above-mentioned laws and treaties are implemented in letter and spirit, it will multiply the fruits for society. As women consist of almost 50 percent of the population, their increased participation can be translated as doubling the output. According to the report by the International Monetary Fund (IMF), Pakistan’s GDP can increase by up to 30 percent if women are more empowered and play their role in the labour force.

The founder of the nation, Quaid-i-Azam Muhammad Ali Jinnah, rightly said, “No nation can rise to the height of glory unless your women are side by side with you….. It is a crime against humanity that our women are shut up within the four walls of the houses as prisoners. There is no sanction anywhere for the deplorable condition in which our women have to live.” Hence, denial of rights to the half of the population is unjustified, beyond commonsense and tantamount to promoting social injustice. Please mind the suggestion of Martin Luther King Jr that “injustice anywhere is a threat to justice everywhere”. It is high time to acknowledge this injustice and take corrective measures and promote the justified rights of women in light of the constitution, laws and the international treaties.

The writer works for Agenda-2030 Sustainable Development Goals (SDGs) and can be reached at amjadsiyal@hotmail.com