History will stand by ‘Aurat March’

The whole of feminine history has been man-made. Just as in America there is no Negro problem, but rather a white problem; just as anti-Semitism is not a Jewish problem, it is our problem; so the woman problem has always been a man’s problem. These are the famous words of Simon De Beauvoir in her famous work The second Sex. Perhaps, this is true, since the birth of civilizations in human history, men has constructed and defined ‘femininity’ on subjective grounds through the canon of immanence. 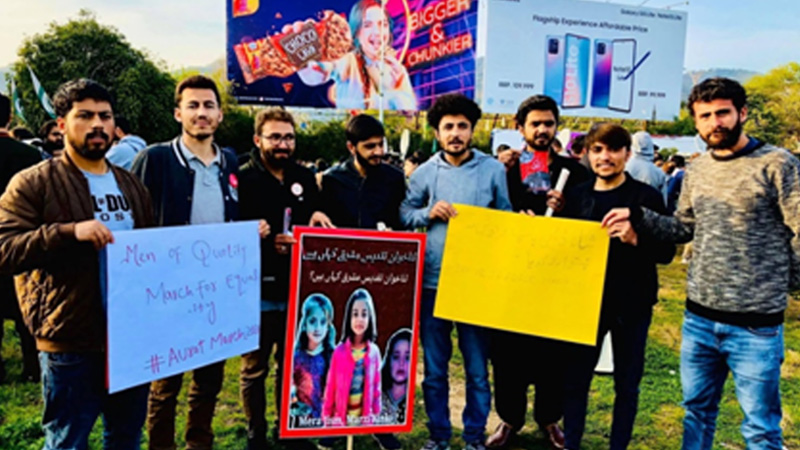 On March 8, the world celebrated International Women Day recognizing the contribution and existence of women around the globe. In Pakistan, women took the streets across the major cities including Lahore, Karachi and Capital territory Islamabad demanding for basic rights such as education, freedom, healthcare and security.

Although, weeks before the ‘Aurat March’, the corporate media tried its best to polarize discussions across the public sphere by trending phenomenal slogan MeraJism, MeriMarzi, transliteration as My body, my choice, the essence of which encompasses broad meaning such as security against harassment, rape, discrimination, misogyny, and honor killing. But, the heated verbal skirmish between women activist and TV anchor MarviSirmad and drama producer KhalilurRehamanQamar has polarized the debate of AuratMarch over social media.

I as the supporter and organizer of Aurat March closely monitored the social media discussion over the issue, where the public opinion was focused on Qamar-Sirmadfight instead of Women March’s authentic demands. In this regard, the point here is to be noted that neither Sirmad is the sole representative of women nor Qamar is the sole representative of men rather both are celebrity gigs, who fought each other upon disagreement over certain slogan.

As a literate conscious youth, I should have my own opinion because I am the sole representative of my own self and being. Because, I consider my participation in the AuratMarch as fervent duty of every youth of our country, who are against harassment, forced marriages, rape, women exploitation, honor killings and gender discrimination. And, I feel proud to be part of it, because I fulfilled my duty and I believe that I am standing on the right side of history. Moreover, it has been seventy years Pakistan is still under the same post-colonial patriarchal feudal structure, which must be changed, if we want a good future for our country and countrymen. Likewise, the very construction of femininity in our country is the artifact of vicious feudalism and patriarchy, which must be deconstructed across cultural, political and social level.

If we put femininity in the discourse of civilization, it can only be understood in Hegelian master-slave dialects

On the contrary, if we put femininity in the discourse of civilization, it can only be understood in Hegelian master-slave dialects as men have always exploited, alienated and marginalized women through oppression and force. Basically, the Hegelian master-slave dialectics opines that the very existence of slave justifies the mighty existence of master.

If slave refuses to recognize master, the very existence of mighty becomes sporadic-perhaps, this will be the first step of slave to free himself from the fetters of immanence by transcending himself into ‘being’ by recognizing the ‘Otherness’. In the latter context, throughout history man has constructed women’s femininity by building a bridge between so-called sacred tradition and patriarchy. Whenever women spoke against vicious patriarchy, men has always defied them with an excuse of sacred traditions-the so-called popular ethics.

Unfortunately, in our time so-called popular ethics are championed by patriarchal traditions and norms, which encourage oppression and exploitation of women in every context. In this regard, the women as an ‘individual agency’ should take up the fight against this oppression and exploitation either through violence or nonviolence. What famous post-colonial scholar Frantz Fanon said,”At the individual level, violence is a cleansing force-it frees the native from his inferiority complex, from despair and inaction”.

Although, due to intense political polarization orchestrated by corporate media, the Women March remained successful despite the fact that the religious factions again remained successful in using marginalized women to launch a counter-Aurat March, which they referred as ‘Haya March’-which is indeed nothing but a metaphorical jargon. But, the fact cannot be denied that either it was Aurat March or Haya March, the credit goes to progressive women, who stood firm in their ideology against patriarchy, feudalism and Capitalism. Salute to all progressive political conscious women, who made the history this time and indeed, the new emerging history will absolve those men and women who stood against oppression, discrimination, harassment, marginalization and alienation.