Is India paving a path for a clash of civilisations?

In the 1990s, Samuel Huntington’s thesis, “The Clash of Civilizations and the Remaking of World Order”, was published in Foreign Affairs. Huntington had suggested that the fundamental reason for the post-cold war conflicts would be the cultural differences between different civilizations. Hehad intelligently identified fault lines between various civilizations that would be battle fronts in the future. Eight major civilisations highlighted by Huntington include the Western, Confucian, Japanese, Islamic, Hindu, Slavic-Orthodox, Latin American, and Africa. Keeping the thesis in context, let’s apply it to the subcontinent, and see if there is an ongoing clash of civilisations or if it is under development. 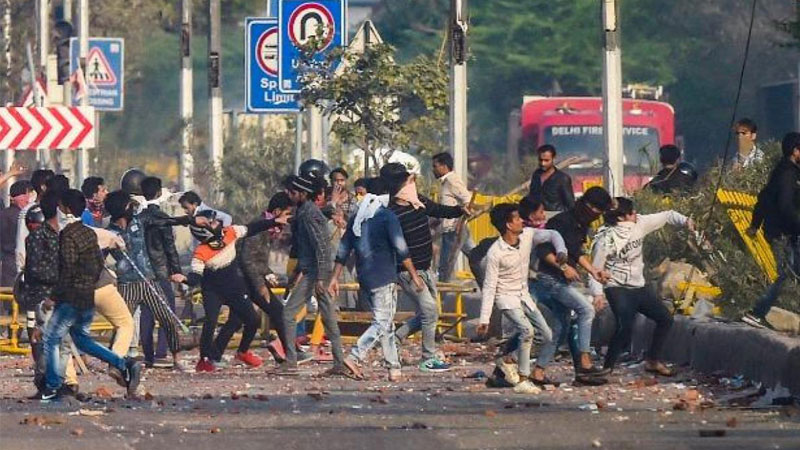 The Hindu and the Muslim civilizations are predominant in the subcontinent, and any clashwill mainly take between these two civilizations. The current happenings in India, as the result of the raving Hindutva wave, strongly suggest that India indeed is paving a path towards the clash. The Modi-led fascist government of the BJP started its second tenure by abrogating the articles 35(a) and 370 of the Indian constitution. TheKashmiri people were stripped of their special status.Muslims being the major chunk of the population were the most affected. It has been more than seven months; the people of Kashmir are under lockdown in an open-air prison. They have been and are being, despite international criticism, denied the fundamental human rights that the UN assures to every citizen of its member state.

The ruling party has continuously made derogatory remarks on Muslims not only in Kashmir but also everywhere else in India. The Indian army, on the other hand, is playing its own devilish role. It has shamefully committed acts of atrocities against the Kashmiri Muslims. Rape, torture, and beating to deathare some examples of the horrific acts of violence. In doing so, not only has it violated fundamental human rights but also the Indian constitution itself, which is of little worth now.

Let’s not forget the controversial decision given by the Indian Supreme Court on the Babri Masjid, which deeply hurt the Muslim sentiments. But the BJP was not satisfied even with that. Lo and behold, they brought forth the National Register for Citizens and then the Citizenship Amendment Act (CAA). Again, the main victims were Muslims. In Assam, a huge number of Muslims were declared as aliens in the Indian land and put in camps under inhumane conditions.

Then the authoritarian BJP thought of something worse to satisfy their anti-Muslim cravings. They put forward the proposal to extend the CAA all over India. Backed by the Hindutva ideology, the BJP was ready for purging the Indian land from all minorities, Indian citizens including the twenty million Muslims. In response,riots broke out all over the country. Now for the past few weeks after the BJP lost the Delhi Legislative Assembly elections, anarchy has taken over.

The world is seeing how hooliganism, specifically against Muslims, has been initiated by the ruling party. Gangs are roaming the streets of Delhi. They raise slogans of “Jai Shiri Ram” and prompt people to kill Muslims at sight. The situation is getting worse with every passing day. Police, courts, media and government officials have all intentionally failed to provide any justice to the Muslim community. Death toll is rising but still no one seems to care.

One point of utmost importance to ponder upon is the reaction to all these actions. Muslims of India are either too patient or are too scared to do something in response that would further instigate violence against them. It is important to understand that a clash can only take place when both opposing parties are actively involved. The current way of Indian Muslims dealing with this crisis highlights their intention of averting a clash. A real clash of civilisations between the Hindus and the Muslims would have materialised if Muslims reacted in the same manner towards Hindus as they are being treated now. But this is not happening, and rightly so.

The role played by Pakistan, and specially the establishment division, is worthy of praise. Pakistan has, throughout this crisis with its hostile neighbour, maintained a stance of peace promotion in the region. The release of the Indian pilot Abhinandan was a gesture of goodwill that Pakistan exhibited gallantly. Despite the Indian bellicosity, the Pakistan army has successfully maintained its order and suppressed any internal element that stimulated war with India. The establishment and the decision makers must be lauded for that. Otherwise, we would have been pulled unwillingly into a spiral of destruction.

Citizens of Pakistan have criticised Indian atrocities against the Muslim Kashmiris but have never as a whole favoured war with India.Pakistan is also playing a very active role in avoiding any clash between these two civilizations bygoodwill gestures, and initiatives such as the building of the Kartarpur corridor. Another very significant point to note is that Pakistan has prevented this wave of hate from entering its own borders. The minorities living in Pakistan are not victimised at the hands of Muslims. Some cases might exist but are widely condemned by the Muslim population in the country.

It is, therefore, clear that a clash of civilizations has yet not taken place. But it is also imperative to note that it is not unlikely that it will not take place in the future. There is a limit to tolerance and patience that one can demonstrate. Once that threshold is passed there’s no stopping to what comes next. India, undoubtedly, is paving a path towards the clash that was suggested by Huntington. Its uncontrolled nationalism coupled with Hindutva has made India more of a fascist state and is a worst nightmare for the Indian Muslims. Pakistan, on the other hand, has cerebrally prevented unrest and a clash within the country as well as the region. And it must continue to do so while protecting its sovereignty and national interests. Global actors must play their role in order to prevent a clash between the civilizations, that also happen to be nuclear powered, and therefore evade a catastrophe that might have devastating global impacts.

The writer reached at aliabdullah023@gmail.com