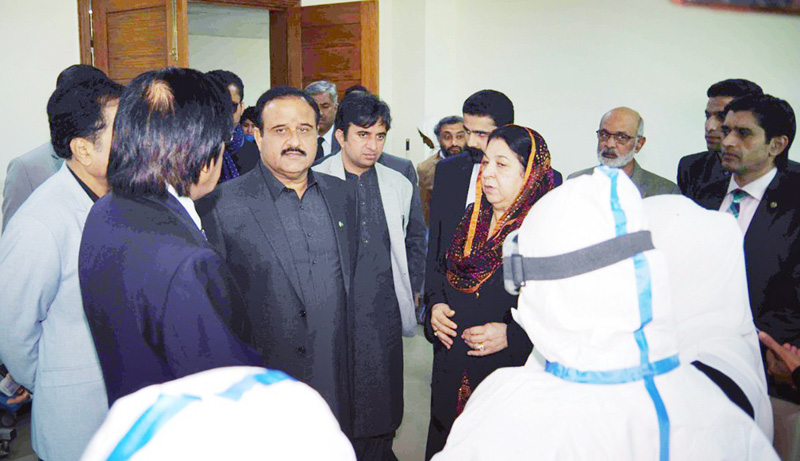 He also inspected different wards in the centre. He also inspected the treatment facilities at corona management centre. Usman Buzdar said that 50 bedded Corona Management Centre has been established in RIU and number of beds can be increased if needed. Necessary diagnostic kits have been arranged for the coronavirus patients in Punjab. Punjab cabinet has already given approval to the enforcement of public health emergency in the province. Every necessary step is being taken for protecting the people of the province from coronavirus. He said that health advisory is being strictly implemented for the prevention of coronavirus. Screening process on airports has been made more effective.

He said that special attention is being paid on the training of doctors, nurses and paramedics. He was briefed about the corona management centre by VC Rawalpindi Medical University Prof. Dr. Muhammad Umar. Provincial Health Minister Dr. Yasmin Rashid, Secretary P&SH and concerned officials were present on the occasion.

Separately, Usman Buzdar stopped his car while seeing nurses standing outside the hospital when he returned to Punjab House after visiting Corona Management Centre established in Rawalpindi Institute of Urology. Chief Minister listened to the problems of the nurses and assured them to solve their problems of appointments as soon as possible.

Usman Buzdar gave necessary instructions regarding the appointment of nurses to Provincial Minister Health Dr. Yasmin Rashid, Secretary Specialization Healthcare and Medical Education and concerned officials. The chief minister announced to appoint 136 nurses in Rawalpindi Institute of Urology and nurses thanked the chief minister for taking personal interests for the solution of their problems.

Also, Usman Buzdar in his message on the occasion of Punjab Culture Day has said that affection, peace, brotherhood, unity and harmony are the prominent features of the culture of Punjab and Punjab culture enjoys unique identity at the international level. The purpose to observe the Punjab Culture Day is to highlight different facets of Punjab culture. He said that only those nations move forward who remain attached with their culture and the land of Punjab is filled with hospitality, love and affection. He said that colourful events will be observed at divisional and district level on Punjab Culture Day and this day will celebrate every year on March 14.

Chief Minister Punjab Sardar Usman Buzdar also expressed a deep sense of sorrow and grief over the sad demise of Zahid Rana, senior journalist. In his condolence message, the chief minister prayed that may Allah Almighty rest the departed soul in eternal peace and grant courage and strengthen to the bereaved family members to bear this loss with equanimity.