Speaking at the inauguration of a four-day program of the International Mother Language Institute at Shegunbagicha in Dhaka on the occasion of Amar Ekushey and International Mother Language Day on February 21, this year, Bangladesh’s Prime Minister Sheikh Hasina Wajid claimed that Sheikh Mujibur Rahmans had visions of Bangladesh in 1948 on the basis of Bengali language. At the same time, she came down hard on a section of the younger generation who cannot speak Bengali (Bangla) properly. It shows her contradictory approach.

Premier Hasina Wajid also allegedly said that killing of the founder of Bangladesh and her father Sheikh Mujibur Rahmans was planned and executed by Pakistan.

However, the separation of the East Pakistan, also known as the Fall of Dhaka and the revival of the blame game by the PM Sheikh Hasina Wajid against Pakistan need realistic analysis.

16th December is the day of tragic memory when Pakistan was dismembered and a new state of Bangladesh was created in 1971 as part of Indian conspiracy which still continues against the integration of Pakistan.

As regards the Fall of Dhaka, Majibur Rahman was already biased against West Pakistan, and started misguiding the people of East Pakistan by preparing their minds for creation of Bangladesh. In this respect, when in 1948, Quaid-e-Azam Muhammad Ali Jinnah addressed Dhaka University; he declared that Urdu would be national language of the country. Majib stood up and said emotionally that Bengali should also be national language. 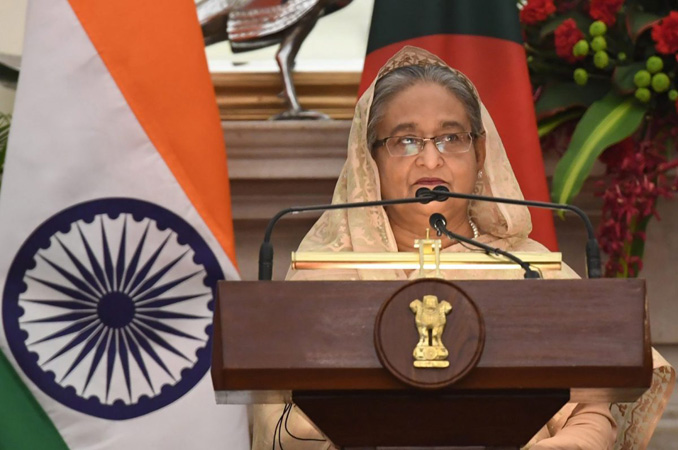 India has a long history of many centuries, based upon religious prejudice against the Muslims. In this regard, Indian intelligence agency RAW which was founded in 1968, has assumed a significant status as invisible actor in formulation of India’s domestic, regional and global policies, particularly directed against Pakistan.

Hindus give credit to Indira Gandhi who in the late 1970s gave RAW a new role to suit her “Indira Doctrine” specifically asking it to undertake covert operations in neighbouring countries, especially Pakistan.

In this connection, RAW had unleashed a well-organised plan of psychological warfare, creation of polarisation among the armed forces, propaganda by false allegations against West Pakistan, creation of differences between the political parties and religious sects of East and West Pakistan, control of media, and manipulating linguistic, political and economic disputes in order to malign the Bengalis against Islamabad.

Notably, one can note political, economic and social disparities almost in every Third World country. India, itself, contains these disparities on a larger scale. In more than 13 states of India, separatist movements are at work.

Nevertheless, RAW’s well-paid agents had activated themselves in East Pakistan in the 1960s to dismember Pakistan. For this aim, it took the responsibility of funding Sheikh Mujibur Rahmans’ general elections in 1970 and the members of his party, Awami League. It colluded with the pro-Indian persons and had paid full attention in training and arming the Mukti Bahni (terrorists). Playing with the bloodshed of Muslims, RAW succeeded in initiating a civil war in East Pakistan. However, huge quantity of arms started entering East Pakistan. Meanwhile, India welcomed the refugees, providing them with every facility to provoke them against West Pakistan.

Majib was already in connivance with India for separation of East Pakistan. In this context, Asoka Raina in his book, ‘Inside RAW: The Story of India’s Secret Service’, discloses, “Indian intelligence agencies were involved in erstwhile East Pakistan…its operatives were in touch with Sheikh Mujib as the possible ‘Father’ of a new nation-Bangladesh, who went to Agartala in 1965. The famous Agartala case was unearthed in 1967. In fact, the main purpose of raising RAW in 1968 was to organise covert operations in Bangladesh. Indian army officers and RAW officials used Bengali refugees to set up Mukti Bahini. Using this outfit as a cover, Indian military sneaked deep into East Pakistan…the story of Mukti Bahini and RAW’s role in its creation and training is now well-known…RAW had established the network of a separatist movement through ‘cells’ within East Pakistan and military training camps in Indian territory adjoining East Pakistan…carrying out acts of sabotage against communication lines so that Indian forces simply marched in at the ‘right’ time…conducting unconventional guerrilla acts against the Pakistani defense forces.”

It is mentionable that before the 1971 war, Mujibur Rahman had announced a separate national flag for East Pakistan in his six points which also included that currency of East Pakistan should be different along with a separate military.

His six points created prejudice among Bengali people especially against West Pakistan. The famous slogan, during his addresses and rallies was, “Punjabi dogs go back.” It was due to Mujib’s instigation that besides Punjabis, Bengalis had also tortured and killed Biharis, Pashtoons and Balochis, while their women were raped.

Since Prime Minister of Bangladesh, Sheikh Hasina Wajid came into power; New Delhi has been employing various tactics to entrap Bangladesh by exploiting her pro-Indian tilt to fulfill its strategic interests. In this respect, after passing of 42 years to the events of 1971, which resulted into the separation of East Pakistan, Abdul Qadir, the leader of Jamaat-e-Islami (JI) was hanged because of his loyalty to Pakistan. Executions of Mujadid and Chaudry of JI were also part of the same scheme.

The tragedy of dismemberment of East Pakistan was aimed at creating a compliant country through Indian trained and financed terrorists (Mukti Bahini) who had killed thousands of Pakistanis in cold blooded activities.

In this regard, while addressing a ceremony during his Bangladesh tour, Indian Prime Minister Narendra Modi openly stated on June 7, 2015 that Indian forces helped Mukti Bahini to turn East Pakistan into Bangladesh. He elaborated that former prime minister Atal Bihari Vajpayee had played an active role in separating Bangladesh from Pakistan, and he had also come to Delhi in 1971 to participate in the Satyagraha Movement, launched by Jana Sangh as a volunteer to garner support for the Mukti Bahini members.

Like PM Modi, in the past, former Indian premier Indra Gandhi also admitted India’s role in the separation of East Pakistan.

At present, Prime Minister Modi is trying to implement the same job in Pakistan’s Balochistan province where RAW is supplying arms to the separatist elements and is encouraging the anti-Pakistan Baloch leaders to continue opposing the federation of Pakistan.

Nevertheless, Indian leadership by manipulating the concerns of Bangladesh army over the raising of “Jatiyo Rakhi Bahini” (National vanguards) in 1972, once again created volatility in Bangladesh by patronizing the killing of Sheikh Mujibur Rehman. The supplementary purpose of the incident was to make 1974 tripartite agreement dormant, as by the agreement Sheikh Mujib, had wished cordial relations among Pakistan, India and Bangladesh.

Ironically, Awami League’s purported nationalism is based on fabricated figures about the killing of three million Bengali people in 1971. It was not authenticated by independent researchers. So, Pakistan’s army had no motivation to kill so many people in such a short conflict, fought in unfavorable operational situation.

Nonetheless, genocide committed by Indian trained terrorists in East Pakistan cannot be ruled out. Awami League’s delusions, under Sheikh Hasina’s rule are expected to create grave problems for Bangladesh. The growing discontent in the country over authoritarian and vindictive rule of Awami League vis-à-vis antagonistic approach towards Islamabad is causing a division in Bangladeshi society.

Regarding the so-called genocide of the Bengali people, a famous Bengali journalist Sarmila Bose authored a book, “Dead Reckoning: Memories of the 1971 Bangladesh War” after thorough investigation. She terms the number a gigantic rumor, while Hamoodur Rahman Commission Report considers even 26,000 as an exaggerated figure. Richard Sisson and Leo E. Rose in book titled “War and Secession: Pakistan, India and the Creation of Bangladesh” clearly pointed out that figures about so-called genocide were Indian purported.

Pakistan’s eagerness in fostering good relations with Dhaka can be gauged from huge investments in Bangladesh by Pakistani traders.

Bengalis must know that in the backdrop of Modi’s anti-Muslims statements and lockdown in Kashmir, including the recent Citizenship (Amendment) Bill 2019, which seeks to provide Indian citizenship to non-Muslim refugees,[allegedly] facing religious persecution in Pakistan, Bangladesh and Afghanistan and role of India in dismemberment of Pakistan through state sponsored terrorism (Insertion of Mukti Bahni) have, clearly, been exposed. People of Bangladesh may identify their real enemies-India and Awami League which are creating conditions for further breakup of Pakistan and has made Pakistanis and Bengalis target each other. Now, they are again active to promote pro-Indian feelings through Awami League and Sheikh Hasina’s government and gag the opposition, so that it can be turned into a fully compliant state. Undoubtedly, as part of old anti-Pakistan campaign, Awami League conceals facts about the Indian conspiracy behind the Fall Dhaka.

The writer writes on international affairs and is author of the book: US vs Islamic Militants, Invisible Balance of Power: Dangerous Shift in International Relations