Who is Sabotaging the US-Taliban Deal and Why?

In a ceremony which was attended by notables from Russia, China, Qatar and other key players, including the US Secretary of State Mike Pompeo and Pakistan’s Foreign Minister Shah Mahmood Qureshi in Doha-the capital of Qatar on February 29 this year, the US and the Taliban have signed a historical agreement for bringing peace to Afghanistan after more than 18 years of conflict. The deal was signed by US special envoy Zalmay Khalilzad and Taliban political chief Mullah Abdul Ghani Baradar with Pompeo as a witness. 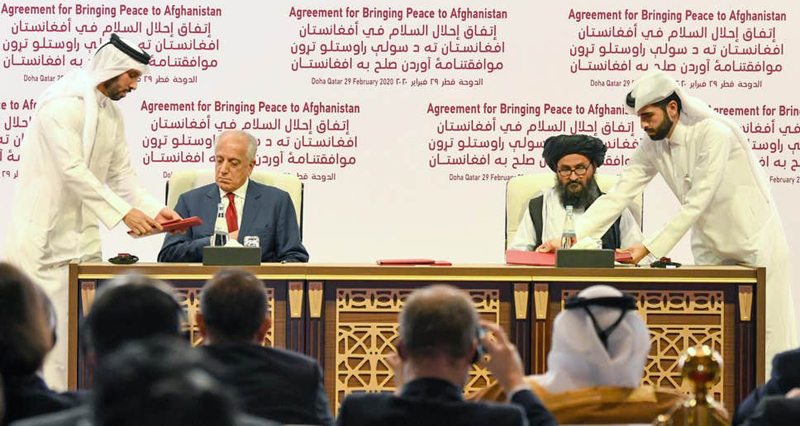 In the agreement, it is committed that within the first 135 days of the deal, the US will reduce its troops in Afghanistan to 8,600 from the current 13,000, working with its other NATO allies to proportionally reduce the number of coalition forces over that period. If the Taliban adhere to security guarantees and ceasefire, a full withdrawal of all US and coalition forces would occur within 14 months. Under the agreement, the Taliban also agreed not to allow Al-Qaeda or any other extremist group to operate in the areas they control. It was also agreed that Afghan soil will not be used as a launching-pad to conduct attacks on Afghan and Western forces.

The deal also provides for a prisoner swap. Some 5,000 Taliban prisoners and 1,000 Afghan security force prisoners would be exchanged by 10 March, when talks between the Taliban and the Afghan government are due to start.

Addressing the media after the signing ceremony, US Secretary of State Pompeo expressed his gratitude for facilitating the peace process by saying: “To Afghanistan’s neighbours, including Pakistan, we thank you for your efforts in helping reach these historic agreements and make clear our expectation that you will continue to do your part to promote a peaceful and prosperous Afghanistan so that the country and region can reap the benefits of lasting peace.”

In his speech, Mullah Abdul Ghani Baradar also acknowledged Islamabad’s role in realising the landmark peace deal and thanked Pakistan for “its efforts, work and assistance.”

Speaking about the deal, US President Donald Trump, who had promised to end the Afghan conflict, said on March 1, that it was “time to bring our people back home … 5,000 US troops would leave Afghanistan by May and he would meet Taliban leaders in the near future.”

Since Khalilzad started his efforts to convince the Taliban to have direct talks with the US, Pakistan was playing a major, as Islamabad succeeded in bringing the Taliban to the negotiating Table. Zalmay Khalilzad who repeatedly visited Pakistan and met the civil and military leadership, including country’s Foreign Minister Qureshi and Pakistan’s Chief of Army Staff General Qamar Javed Bajwa, admired Pakistan’s role in the US-Taliban peace dialogue.

It was the part of “Bajwa Doctrine” which has compelled America to resolve the Afghan issue through dialogue, as peace in Afghanistan has co-relationship with peace in the region, including Pakistan.

It is worth mentioning that during three-day visit to the US, Pakistan’s Prime Minister Imran Khan met American President Donald Trump on July 22, 2019 in a push to mend the strained relations between Islamabad and Washington. Foreign Minister Shah Mahmood Qureshi and General Qamar Javed Bajwa also accompanied the premier.

Talking to Prime Minister Khan, President Trump offered to mediate in the Kashmir dispute between nuclear-armed neighbours Pakistan and India. Regarding the Afghan peace process, Trump said: “The US appreciates Pakistan’s help in its efforts for bringing peace to Afghanistan” and “is seeking help from Pakistan to extricate the US from the long war in Afghanistan”. Unlike his previous blame game that Pakistan was providing “safe haven to terrorists”, President Trump stated that they greatly helped in curbing extremism.

It is regrettable that less than 24 hours after the US-Taliban landmark deal, Afghan President Ashraf Ghani rejected prisoner swap with the Taliban. In this context, he told reporters on March 1 this year: “There is no commitment to releasing 5,000 prisoners … Any prisoner release is not in the authority of the US “, but “in the authority of the Afghan government.” An estimated 10,000 captured Taliban are being held in Afghanistan.

In fact, President Ghani and India which is also feeling the pinch of the US-Taliban peace deal are trying to sabotage it for their collective interests at the cost of Afghan people, Pakistan and regional stability.

President Ashraf Ghani thinks that if the US-led NATO forces which are well-equipped with latest arms failed to cope with Taliban fighters, as to how Afghan forces can encounter them. Therefore, he wants that NATO forces should continued their presence in the country.

Similarly, New Delhi which does not intend to see peace in Afghanistan and is undermining regional stability by creating unrest in Afghanistan, also wants the presence of the NATO forces in that country.

However, Indian RAW which is in connivance with Israeli Mossad has awell-established network in Afghanistan and has been fully assisting cross-border incursions and terror-activities in various regions of Pakistan through Baloch separatist elements and anti-Pakistan groups like

It is noteworthy that New Delhi which has already invested billions of dollars in Afghanistan, also signed a wide-ranging strategic agreement with that country on October 5, 2011. And, the then Afghan President Hamid Karzai had also signed another agreement with India to obtain Indian arms and weapons. While, under the cover of these agreements, India has further strengthened its grip in Afghanistan. By taking advantage of lawlessness in Afghanistan, India is up to its usual tirade to foment an environment by conducting terrorist attacks in that country to prove that Pakistan is creating trouble for Afghanistan. Indian desperation in Afghanistan was increasing in the backdrop of growing engagements of Pakistan, Afghanistan, China and US. Besides, New Delhi is trying to sabotage the China-Pakistan Economic Corridor (CPEC). Recent terror-attacks in Pakistan and Balochistan might be noted as example.

It is unfortunate that on direction of New Delhi and like the former regime of Afghan president Karzai, Afghanistan’s present rulers have also started accusing Pakistan of cross-border terrorism. In this context, after hours of the Taliban captured Kunduz city, on September 28, 2015, during his address to the UN General Assembly, Afghanistan’s chief executive Abdullah Abdullah blamed Islamabad for carrying out cross-border attacks and destabilizing Afghanistan.

In the recent past, President Ashraf Ghani also accused Islamabad for terror attacks in Afghanistan. In case of Afghanistan, there are several groups of Al-Qaeda, ISIS (Daesh) and Taliban like the TTP. Some of them are being used by secret agencies such as Mossad and RAW to obtain the collective and individual designs of their countries against Pakistan and Middle Eastern countries. New Delhi and Israel which want to prolong the stay of the US-led NATO troops in Afghanistan are exploiting the dual policy of America against Pakistan, China, Russia and Iran.

It is of particular attention that when the US former President Barrack Obama had decided to withdraw American forces from Afghanistan by announcing the schedule, before his trip to Washington in 2009, the then Indian Prime Minister Manmohan Singh had stated that he would encourage the American leadership to stay in Afghanistan. In fact, in connivance with the then President Hamid Karzai, New Delhi wanted to prolong the stay of the NATO forces in Afghanistan. They knew that, in case, the US-led NATO forces withdraw from Afghanistan, Karzai regime will fall like a house of cards. Even India would not be in a position to maintain its network in wake of the successful guerrilla warfare of the Taliban.

Notably, regarding Indian activities in Afghanistan the then NATO commander, Gen McChrystal had pointed out: “Indian political and economic influence is increasing in Afghanistan…is likely to exacerbate regional tensions.”

The peace deal between the US and Taliban is likely to render Indian investments in Afghanistan and intelligence setups and proxy support against Pakistan ineffective. It will suit Indian designs, if Afghanistan does not move towards peace and keeps simmering. So, Afghan people should need to realize that New Delhi which has sponsored trained and propagated all anti-Afghanistan and anti-Pakistan elements such as Pashtun Tahaffuz Movement (PTM), ISIS, TTP and Afghanistan’s intelligence agency National Directorate of Security (NDS) to destabilize both Afghanistan and Pakistan are likely to sabotage the US-Taliban peace agreement.

Afghans must also take cognizance of the fact that pro-Indian President Ghani will also try to sabotage the US-Taliban peace deal, as he wants the stay of NATO forces there. It is worth-mentioning that Pakistan’s Armed Forces and particularly Army have successfully broken the backbone of the foreign-backed terrorists by the military operations Zarb-e-Azb and Radd-ul-Fasaad, while the ISI has broken the network of these terrorist groups by capturing several militants and thwarting a number of terror attempts. Besides other provinces, peace has been restored in Khyber Pakhtunkhwa and Balochistan. In this respect, thousands of terrorists were killed and huge quantity of explosives seized during the operations of the security agencies.

Nevertheless, in collaboration, RAW, NDS, TTP, Daesh and PTM are laying another ploy to revive a diminishing role. Taliban are working for an Islamic system, Indian Prime Minister Narendar Modi’s government is leading anti-Muslim campaign within India. This hypocrisy is itself indicator of foul play in Afghanistan. So, India and Afghan government which want to prolong the stay of NATO forces in Afghanistan are also playing double game with America.

Especially, Washington must also be aware of the coming negative developments, which could create misunderstanding between America and the Taliban, as RAW and NDS can use some other terror outfits like TTP for targeting the military installations of the US and its allies and to shift the blame game towards those Taliban whose leader has signed peace deal with America. These elements could also accuse Islamabad for cross-border terrorism in Afghanistan like the past approach, because Washington and Islamabad have been promoting cordial relations owing to President Trump’s positive approach towards the latter.

Sajjad Shaukat writes on international affairs and is author of the book: US vs Islamic Militants, Invisible Balance of Power: Dangerous Shift in International Relations Email: sajjad_logic@yahoo.com