Japan’s crowdless sport — A prelude to a coronavirus-hit Olympic Games? 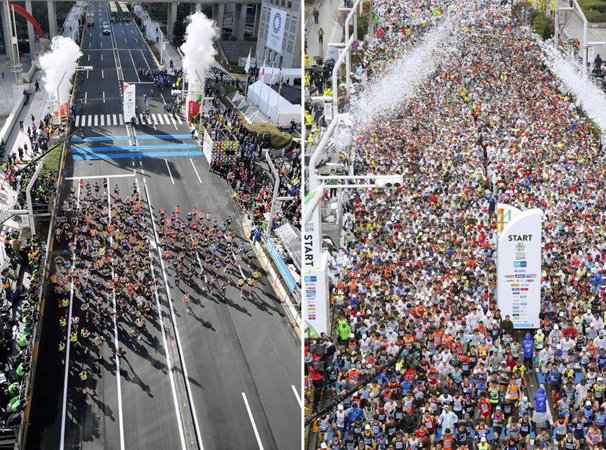 TOKYO: A line of masked spectators raises muffled cheers for elite marathon runners, and a baseball bat’s thud on a ball echoes around a vast, empty stadium: Sport in Tokyo this weekend set the tone for how a coronavirus-hit Olympic Games could play out. For the first time ever, Japan’s professional baseball teams staged pre-season openers behind closed doors after the country dramatically escalated its response to the global coronavirus epidemic by closing schools and cancelling mass events. In Tokyo, Sunday’s staging of the annual marathon, which last year saw close to 38,000 amateur participants, was scaled back to just a few hundred professional athletes, with the public strongly discouraged from lining the route. In past years the event attracted more than 1 million roadside spectators. “If the Olympics look like this, it’s going to be a sad sight,” said 68-year-old shoemaker Hiroshi Enomoto, one of the fistful of spectators cheering on the runners in the downtown area of Asakusa. The Olympic marathon itself has been moved to Japan’s northernmost island of Hokkaido because of worries over Tokyo’s scorching summer heat, but Enomoto and others wondered whether this weekend’s crowdless events were a harbinger of things to come.

“There are maybe 20% of the number of people who came to see the race last year. Normally, it’s so packed you can barely breathe,” said Enomoto, who remembers seeing the 1964 Olympic torch relay passing through Asakusa. Barely 30 minutes after the runners zipped through the neighbourhood’s sun-soaked streets, staffers clad in bright vests removed plastic barriers and cleaning trucks swooped in to pick up trash. About an hour later, Birhanu Legese from Ethiopia arrived at the finishing line in sight of the Imperial Palace in 2:04:15. Japan’s Suguru Osako ended fourth in 2:05.29, beating his own national record and securing a spot in the men’s field for the Olympics.

Prime Minister Shinzo Abe and the president of the International Olympic Committee Thomas Bach have said the Games will go ahead. Bach said his organization was “fully committed” to the July 24 start, dismissing other options as “speculation”. But the sports event cancellations and other measures were not limited to the marathon. Soccer and rugby have also been affected, and Japan’s sumo association decided on Sunday to hold its spring grand tournament, set to begin in Osaka next Sunday, without spectators.

Baseball fans who on Saturday had to swap the 46,000-capacity indoor stadium of the Yomiuri Giants – Japan’s version of the New York Yankees – for a sports bar in central Tokyo said they hoped the virus would not impact the Games. “I don’t think the Olympics will be cancelled. I’d like to see them, so if possible, I want them to go ahead,” said Natsuki Tsukamoto, 26, in between sips of beer and bites of fried chicken. Deprived of the support of Tsukamoto and other fans at the Tokyo Dome, the Giants slumped to a 3:5 loss to their cross-town rivals, the Yakult Swallows.

Elsewhere, the manager of Tohoku Rakuten Golden Eagles baseball team, Hajime Miki, reflected on the importance of spectators to sport after another game played in the absence of fans. “It made us realise again that the cheering and getting the fans to see the games gives power to the players,” said Miki.