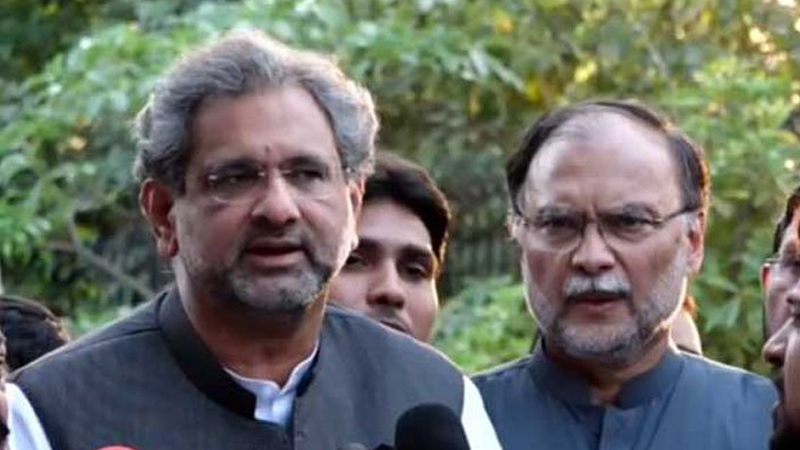 A two-member bench under IHC Chief Justice Athar Minullah heard the cases and granted bails against bonds worth Rs 10 million each.

In its written orders, the court said that the investigation officer may ‘impose such conditions as he deems appropriate’ to secure cooperation and presence of the petitioners during their respective inquiries.

During the hearing of Abbasi’s bail petition, Chief Justice Minallah remarked that the government took a grant from another country (United States) for help, and the country itself hired a firm. “Public funds were not used for the project; USAID funds were used instead … Public Procurement Regulatory Authority rules are not applicable in this case,” he said, and questioned the National Accountability Bureau (NAB) prosecutor about whether the foreign ministry had been asked about USAID.

The prosecutor informed the court that the watchdog was acquiring records from the ministry. He further said that Abbasi had purchased LNG at expensive rates. The chief justice then questioned the prosecutor whether NAB had researched if any company could be given the terminal’s contract at cheaper rates. Referring to a letter submitted by the anti-graft watchdog, Justice Minallah remarked that NAB cannot mention a company providing services at a cheaper rate if it did not participate in the bidding.

Meanwhile, the National Accountability Bureau (NAB) has decided to file an appeal in the Supreme Court challenging the IHC’s ruling. The decision was taken during a meeting on Tuesday chaired by NAB Chairman Javed Iqbal.

Separately, during a hearing of Ahsan Iqbal’s bail petition in the Narowal Sports City case, the chief justice asked the NAB prosecutor to clarify the watchdog’s policies. “What is your policy on arresting people or not or filing references against them? If there is a reference against someone, you have special powers,” he said, and questioned NAB’s move to arrest someone who “is cooperating and giving answers”. “NAB’s purpose is to investigate and inquire. If a suspect is cooperating and answering questions, what reason is there for his arrest?” he questioned.

At this point, the prosecutor admitted that Abbasi and Iqbal should be considered innocent until proven guilty.

Meanwhile, the Lahore High Court (LHC) on Tuesday sought assistance from the attorney general of Pakistan over Maryam Nawaz’s plea to remove her name from the exit control list (ECL).

During the hearing of the case on Maryam Nawaz plea, the court remarked that court wants to hear the stance of the attorney general over the issue.

During the hearing, deputy attorney general mentioned that the Punjab government has rejected the Nawaz Sharif plea seeking extension in his stay for eight weeks in London and after rejection, the plea has automatically become worthless. However, the court summoned the attorney general and adjourned the hearing for a week.