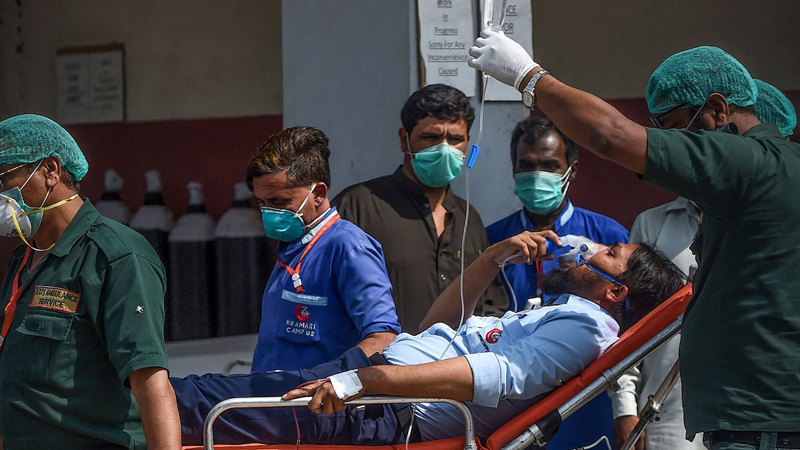 On Wednesday, Sindh Health Department officially declared soybean dust as the cause behind the incidents in Karachi’s Keamari, which had claimed around 14 lives while scores were hospitalised due to respiratory issues.

According to the press release, the Sindh Health Department stated that soybean dust was more dangerous for asthma patients. The advisory cautioned people to use masks and ensure cleanliness.

Earlier on Wednesday, the unloading of soybean at Karachi Port was halted after a report called it the cause behind the deaths of more than a dozen Karachi residents.

A preliminary report prepared by experts at the International Center for Chemical and Biological Sciences (ICCBS) at Karachi University suggested that the deaths during the past couple of days had been caused by overexposure to soybean dust.

The report stated that soybean dust was found in the blood samples of the deceased persons who had died in the city in the last few days. According to sources, the report mentioned Spain had experienced a similar soybean dust poisoning two years ago that had affected numerous people in the country.

ICCBS is an advanced research centre at the University of Karachi. The Dr Panjwani Centre for Molecular Medicine and Drug Research and Hussain Ebrahim Jamal Research Institute of Chemistry are parts of the research centre.

A letter sent to Karachi Commissioner Iftikhar Shallwani by ICCBS Director, Dr Muhammad Iqbal Choudhary, said that the lab had examined blood and urine samples of people exposed to toxic aerosols as well as soybean dust samples collected from the port area. Dr Choudhary said that while the ICCBS was still extensively engaged in deciphering the cause of this toxic exposure, the findings so far suggested the symptoms experienced by Keamari residents were a result of “overexposure to soybean dust.”

The lab suggested hospitals should give bronchodilators and anti-histamines to affected people. ICCBS also advised that extreme care be taken while unloading soybean containers.

Adviser to CM Sindh, Senator Murtaza Wahab, also tweeted that preliminary reports submitted by experts at the Karachi University had claimed the Kaemari incident had happened due to “overexposure of soybean dust.”

The suspected gas leak in Karachi’s Keamari area has so far killed at least 14 people, according to a spokesperson for the Sindh health department.

The spokesperson added that more than 300 people, including women and children, were affected by the health disaster.

Earlier, it had reported that authorities suspected the chemical was hydrogen sulphide, a highly poisonous gas, which is a byproduct of crude oil and also generated in the sewerage system. However, the spokesperson said the lethal substance had not been identified yet.

Over 300 people were moved to Karachi’s public and private hospitals in the last few days, complaining of breathing problems, respiratory issues, stomach aches, burning sensation in eyes and tightness in the chest.

Karachi Port Trust (KPT) Chairperson, Rear Admiral Jamil Akhtar, on the other hand, had, on Monday, refuted claims that the gas leakage had occurred at the port or from any ship.

“We have completely inspected the area under the KPI’s jurisdiction including the terminals and berths, no evidence of a gas leak was found.”

Residents of the area surrounding Karachi Port, including Keamari, protested against the rising death toll from the suspected toxic gas leakage, as well as the growing number of people affected by the health disaster.

The demonstrators, including traders and the neighbourhood’s business community, blocked various roads and held a sit-in on key routes near Jackson Market and nearby areas; bringing traffic to a standstill. Traffic police said vehicles were being rerouted to alternative streets.

Traders Association said there had been no satisfactory efforts to ascertain the cause of and prevent further deaths from the alleged gas leak despite the incident being reported some 48 hours earlier.

One resident said people in Bhutta Village, near Shirin Jinnah Colony, felt heightened fear and panic prevailed among the dwellers.

People were seen wearing face masks while parents were not sending their children to the schools that remained open and shop-owners were forced to close down their businesses and protest. Many others had decided to move their families away from the area.

Administrators of most public and private schools had announced that educational institutes, including those in Keamari, Machar Colony, City Railway Colony, Clifton, Tower area and other coastal localities near the Karachi Port, would remain closed to avoid any unwanted incidents and keep children safe.

Police, on Monday, registered a First Information Report (FIR) after a gas leak in the city’s Keamari area had killed many people and left hundreds hospitalised.

The FIR was registered in Jackson Police Station under the supervision of the SHO. As per the complaint, the poisonous gas affected people on Monday at Masan Road, Railway Colony, Jackson Bazaar, and surrounding areas. As of reporting time, some 63 had been hospitalised.

Police have been asked to determine the cause of the gas leakage and bring the culprits to account.

Sindh Chief Minister Murad Ali Shah had ordered authorities to evacuate people from affected areas and all the measures should be taken to treat the patients in the Hospitals of Karachi. Still, that coastal area is in the grip of panic but who will be the responsible and get punishment?

The writer is a retired doctor of the Sindh Health Department and can be reached at contact.abdulrazak@gmail.com