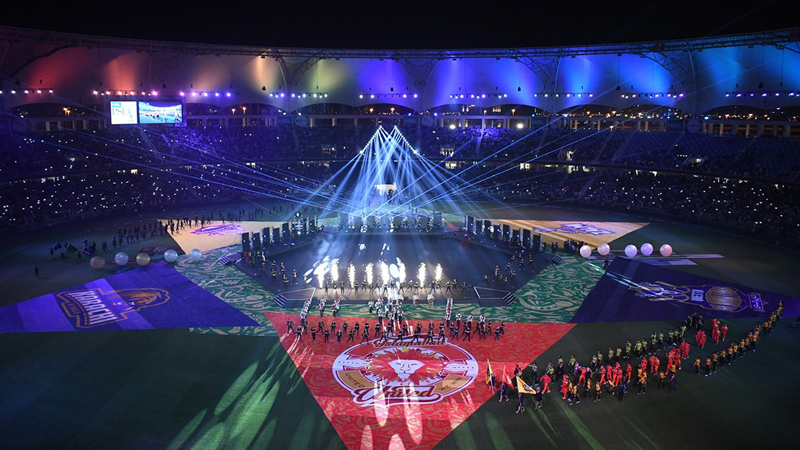 The opening ceremony of Pakistan Super League (PSL) 2020 is currently taking place at the National Stadium in Karachi.

The ceremony, which will feature an ensemble of 350 artists, began at 6:45pm local time.

Abrar-ul-Haq, Aima Baig, Rahat Fateh Ali Khan, Sajjad Ali, Sanam Marvi and rock band Soch are just some of the names that are lined up to perform at the event.

Renowned artists entertained the crowd during the colourful ceremony.

The provincial government has made all the arrangements for the event and security measures have been put in place with deployment of Rangers and police personnel at all the key points and surrounding areas of the venue.

It is for the first time that all the matches of PSL are being played in Karachi, Lahore, Rawalpindi and Multan while final of the event will be held at Lahore.

Thousands of fans in the stadium will be on the edge of their seats and millions around the globe will be glued to their television sets as renowned artists like Abrar-ul-Haq, Aima Baig, Abu Mohammad, Fareed Ayaz, Rahat Fateh Ali Khan, Sajjad Ali, Sanam Marvi and rock band Soch embellish the ceremony with their breath-taking performances.

Ali Azmat, Arif Lohar, Haroon and Asim Azhar will perform PSL 2020’s anthem “Tayyar Hain”. The glittery ceremony, which will be held before the opening match of the tournament between defending champions Quetta Gladiators and two-time champion Islamabad United, will also include riveting acts and a spectacular fireworks show.