Karigar Mela — an omen of positivity

* Sindh government, private sector and Non-Governmental Organisations have been making attempts to revive this business 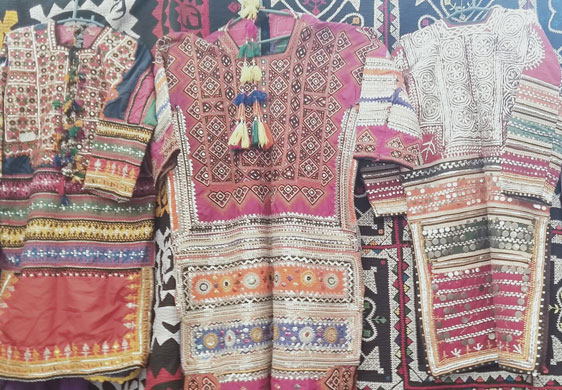 Long before industrial revolution and after the arrival of East India Company in the subcontinent, the handicrafts and small industries in present day Sindh were thriving in every nook and corner.

Sindh government, private sector and Non-Governmental Organisations have been making attempts to revive this business. Thardeep Rural Development Program (TRDP) one of the reputed nongovernmental organization through its European Union supported Sindh Union Council and Community Economic Strengthening Program SUCCESS reached out to 200000 poorest households possessing skills of embroidery and other handicraft disciplines. Members from women organizations formed under this program were provided trainings for value addition in traditional handicraft at small scale.

Thousands of individuals, families, diplomats, government officials, chamber of commerce, media and people from various life thronged the Mela on 28 and 29 January 2020. This scribe visited different stalls and found out that majority of installs were setup by women themselves and were interacting with visitors, briefing them with full confidences about their products and negotiating price with excellent entrepreneur skills.

One stall was setup by a groups of transgender from Karachi.

It was refreshing surprise that how a woman or young girl from remote parts like Kachho, Thar or Thano Bola khan can muster such confidence and speak fluently like a sharp minded entrepreneur. When asked about this improvement, they said that TRDP has formed all women member’s organizations at Union Council, Village and Muhalla level and during meetings for last 2 or 3 years they have been able to develop this confidence and through different trainings they have learnt entrepreneur skills.

The environment of the Mela was euphoric, from the interest and cooperative spirit among entrepreneurs, volunteers of TRDP.

It looked that it was everybody’s event. In one front part of stall two young men were standing with broad smile to welcome visitors. In remaining parts women were displaying their handicrafts. The young men in Urdu shared that they were from chambers of commerce Hyderabad chapter. They shared that when we saw that due to high rush women were looking for space for stall we offered them to display their products in remaining part of the stall. The young men shared that chambers of commerce is striving to promote small business.

On one stall a woman from Thano Bola Khan of Jamshoro District had put Pesh (a wild plant) made products like mats, purses and other products on display with beautiful fringes. She even knew about the steps to be taken from grassroots to provincial level to promote the handicrafts and uplift the women economy.

On another stall one young man has displayed Kashi made products and other elderly man was displaying pottery made articles.

Elder and young man said that they are from Sehwan and Hala. Both works have their own peculiar beauty. Both artisans lamented about high cost of inputs like colour in case of Kashi work, ever dwindling demand and high inflation badly impacting their business.

They said that through this Mela response they are getting encouragement and appreciation from visitors and have good sell also.

Women artisan and entrepreneurs on almost all stalls shared with joy that during previous stalls in different towns they got enough coverage from media and appreciation from visitors but for the first time beside lot of media coverage and encouragement from visitors and institutions, they have sold good deal of the products and got impressive orders. One female artisan shared that she had got online orders and lot of linkages built with buyers in Karachi.

Speaking at the conference on sidelines of Mela, Doctor Allah Nawaz Samoon, Visionary CEO, TRDP said that the Mela creates hope in Sindh for artisan community who are precious human resources as they have been transforming rich culture of Sindh but haven’t earned name and fame they deserved because of great gulf between their exquisite skills and new emerging technology.

He commended and acknowledged the contribution of his fellows, predecessors, supporters and other stakeholders like Sono Khangrani, Khadim Lakhair and others as well as support from EU, Sindh government and collaboration with RSPN in SUCCESS program. Dr Allah Nawaz maintained that through this Mela a beam hope has been created for rival of past glory of the artisan’s work. He said that one of the most important quality of this program is that women from most remote crannies of Sindh province are in leading role. He said that every city has its own handicrafts specialty ranging from fabric, material, embroidery, to jewellery, carving, mirror work and other handicraft items. Each colour, style, design and motif carries with it a unique symbol portraying the culture of that particular area and builds on people’s indigenous skills he concluded.

Daulat Ram Lohana, president chamber of commerce Hyderabad while applauding TRDP for arranging such large event, said that the artisan is doing wonderful work but they need to synergise their products with market demand by applying lighter colours for their crafts.

Androulla Kaminara, Ambassador of the European Union to Pakistan spoke about importance of 18 million Euro funding for SUCESSS program for reduction of poverty and stressed the need for poor to earn and husbands to let women change their lives through work and see the children in school adding that women have lot of potential they just need little help.

Shehla Raza, Provincial Minster for Women Development said that Mela by TRDP has provided platform to the artisan to have access to market where they can sell their handcrafts, she added that under this program woman are being made aware about immunization and growing vegetable through kitchen gardening etc.

Such programmes can help in reducing the role of middle men, build the confidence of small businesses particularly women from faraway parts of rural areas and help artisans to learn from each other’s experience. The model adopted and applied by TRDP is gaining pace of success as under this initiative due to putting women in leading role and facilitating their exposure to huge market at Karachi. The Mela not only helped in prompting handicrafts and smaller businesses but also can prove big engine for reducing poverty and transforming rich culture at home and abroad, next big step can be to take selected artisan with most attractive handcrafts to trade hub in other countries but of course this will need huge finical resources.