Should police officers be able to get away with having sex with detainees?

The map, produced by Buzzfeed, was prompted by the story of Anna Chambers. One September night last year, Anna was sitting in the parked car with two friends when a charcoal gray van pulled up and flashlight beams momentarily blinded her. The 18-year-old had grown up in south Brooklyn and spent many Friday nights like this driving around the city with friends, looking for places to hang out away from home. On this night, though, September 15, 2017, sometime between 7:30 p.m. and 8 p.m., she crossed paths with the cops. 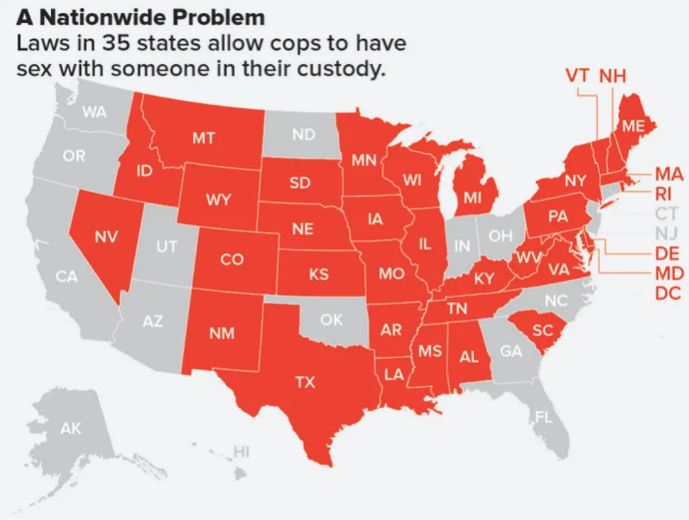 There were two of them, both plainclothes detectives over 6 feet tall and powerfully built, flashing their badges and asking questions. There was weed in the front cupholder, and soon the detectives ordered the three occupants out of the car. As Anna later recalled, the detectives handcuffed her and told her friends, both young men, they were free to go. Then, she said they led her — a slender woman just over 5 feet tall — into the back of the unmarked police van with tinted windows.

Inside, Anna said the detectives took turns raping her in the backseat as the van cruised the dark streets and as she sat handcuffed, crying and repeatedly telling them “No.” Between assaults, she said, the van pulled over so the cops could switch drivers. Less than an hour later, a few minutes’ drive from where it all began, the detectives dropped Anna off on the side of the road, a quarter-mile from a police station, surveillance footage shows. She stood on the sidewalk, her arms wrapped around her chest, looking up and down the dimly lit street and pacing slowly before borrowing a cell phone from a passerby to call a friend.

DNA collected at the hospital after the incident matches that of the two detectives, who have since left the NYPD and have been charged with rape. Despite material evidence of sexual intercourse, this is not an open-and-shut case. There is no federal provision against police officers having sex with persons in their custody, nor does the State of New York have any such law on its books.

Considering the evidence, that is a glaring omission. Reports by the Cato Institute indicate that sexual assault is the second-most reported form of police misconduct in the U.S., after excessive use of force.

In 2015, after a year-long investigation, the Associated Press revealed that in the six-year period from 2009 to 2014, about 550 police officers had lost their badges for rape, sodomy and other types of sexual assault; and a further 440 for possession of child pornography and other sex crimes; or sexual misconduct such as propositioning citizens, sexting juveniles, or having consensual but prohibited sex while on duty.

The AP article cited a 2011 report by the International Association of Chiefs of Police, suggesting the job itself creates both the opportunity for sexual misconduct by police officers – given their power, independence, irregular hours and interaction with people deemed less credible – as well as offering them cover after the fact, via the loyalty that impels officers to shield each other from accusations.

Having recognised the loophole and its deleterious effects, a number of states have taken steps to close it – albeit fairly recently in some cases: Oregon in 2005, Alaska in 2013 and Arizona in 2015). The other 13 are Washington, California, Arizona, Utah, Hawaii, North Dakota, Indiana, Ohio, Connecticut, New Jersey, North Carolina, Georgia and Florida.

In the other 34 states, plus DC, police officers can claim they were ‘seduced’ into having sex by detainees. It is not unlikely that the defendants in the Anna Chambers case will use that line of defense when the case goes to court in the next few months.

Meanwhile, the Anna Chambers case is spurring change – no doubt also linked to the outrage and revelations following the Weinstein case. The hashtag #policetoo has started to trend. Nationwide, more than 20 police officers have resigned or were fired because of alleged sexual misconduct. And a New York City councillor is proposing a bill to make sex between a police officer and anyone in their custody illegal in New York City.