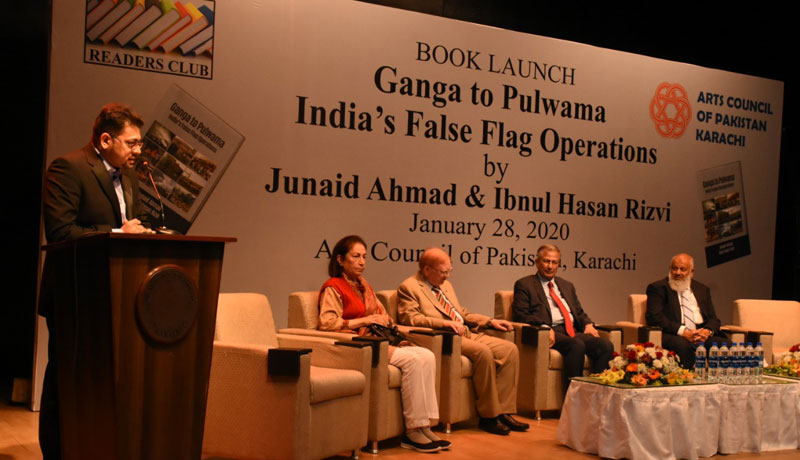 A book was launched here on Tuesday which presents a critical evaluation of India’s constant false flag operations against Pakistan and an eye-opener for everybody to see that how India, with its planned game of deception, has been hoodwinking the world by portraying Pakistan as a terrorist country.

The book launching ceremony organized by the Readers Club at Arts Council of Pakistan was attended by a large number of intellectuals, academicians, security analysts and civil society members.

On the occasion, former senator Javed Jabbar delivered a comprehensive review of the book, followed by Sabuha Khan who presented her views about the publication. Vice Admiral (r) Arifullah Hussaini expressed his thoughts about the book, followed by musings on the book by author Ibnul Hasan Rizvi. After the speeches, an extensive question-answer session was held wherein the participants asked particular questions about the facts described by the book and the results derived therein.

The purpose of the book is to serve as a caution to Pakistanis and the international community against India’s ultimate game of deception. The book has established that how a hegemonic country like India, with the support of ruthless and corrupt rulers, can brow beat its smaller neighbours and eventually the entire world.

From the several incidents, the book has derived a definite pattern which should be enough to squash and rebut India’s allegations. The pattern which emerges from these incidents can be summerised as follows: India blamed Pakistan for all the incidents without any proof. No Pakistani was ever involved in any of the above operations. Even Ajmal Kasab of Mumbai attacks was later found to be an Indian. All attackers were killed by the Indians within few hours leaving no one alive. All the people killed in these attacks belonged to lower caste Hindus or Muslims and no upper caste Hindu, VIP, foreigner or journalist was ever killed.