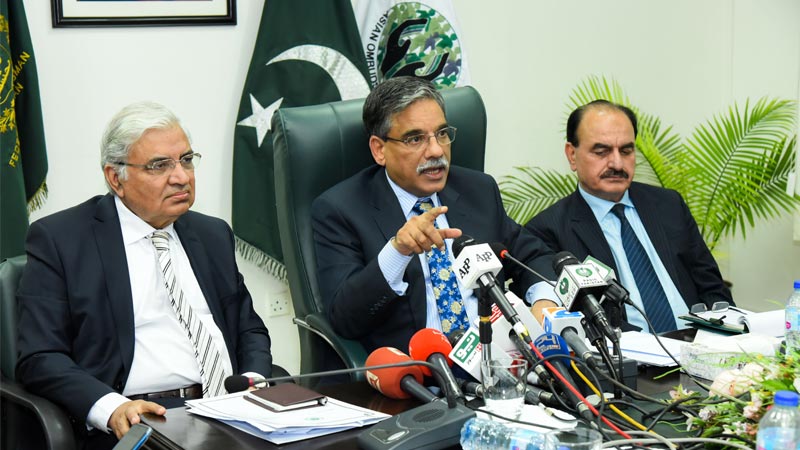 He was addressing a press conference here at Ombudsman office to brief the media about the performance of the organisation in previous year. He said it has expanded its services to the far flung areas of Pakistan through robust awareness campaign. In compliance with direction of President Dr Arif Alvi, Syed Shahbaz said, a number of innovative techniques to increase awareness among general public about the use of services being offered. In this regard two seminars were held at President Secretariat and Governor House, Lahore.

Syed Shahbaz said that speedy and free of cost justice is being delivered at the doorsteps of the people by the institution of Wafaqi Mohtasib.

“73,059 complaints were received during the year 2019, which was 3.31 percent higher than the previous year, whereas 74,869 complaints have been decided by clearing the backlog of November and December 2019, showing 7.60 percent rise as compared to the 2018”, he recalled adding that findings issued by this office were accepted mostly by the Agencies and the complainants, only in 1039 cases review petitions were filed which was 1.39 percent of total complaints, whereas, 317 representations were filed before the President of Pakistan against the decisions of Wafaqi Mohtasib, which is 0.42 percent of total complaints.

He said that the year 2019 was observed as the “year of awareness”, therefore, a comprehensive public awareness campaign was run by using electronic, print and social media tools. Due to this campaign a number of complaints have increased considerably, especially in Balochistan, South Punjab and other remote areas of the country. He said that we have also introduced a Mobile App through which 2,054 complaints were received. Now a person can lodge a complaint from his/her home through Mobile App and also witness the entire process and status of his complaint. High number of complaints was registered against LESCO as 9,932, K-electric 6,207, SNGPL 6,589, PESCO 4,404 and NADRA 3,948.

Syed Shahbaz said that the Institution of Wafaqi Mohtasib, established 37 years ago, has emerged as a vibrant institution to provide relief to a common man. He said that his office is considered as a poor man’s court which dispenses free of cost justice in a speedy manner.

He said that during 2019 every finding was decided within a period of 60 days and the review petition within 45 days. He said to improve the redressal mechanism; the officers of this secretariat visited the remote areas under Outreach Complaint Resolution (OCR) to provide relief at the doorsteps of the common man and decided 5,228 cases during the year. Under Integrated Complaint Resolution Mechanism (ICR), 160 Agencies (Federal Government Departments) have been taken on board for better monitoring & expeditious resolution of public grievances and 7,852 cases were registered through ICR system, where the Agencies had failed to resolve these cases within 30 days.

During the year a number of meetings were held with the provincial chief secretaries and heads of criminal justice departments of the four provinces to improve the living conditions of prisoners in jails. In this regard, 04 quarterly implementation reports have been submitted in the Supreme Court of Pakistan. We have ensured appointments of one psychiatric and a doctor in every jail. The mentally ill prisoners have been segregated from other prisoners; skill centers with the help of TEVTA are being established in every jail. During this year the One Window Facilitation Desks at 08 international airports received more than 175,000 complaints from the passengers which were resolved on spot.

He said in order to facilitate the government officials, E-Pension system has been established in AGPR and all ministries and departments have been linked with AGPR for in-time processing of their pension cases.

Syed Shahbaz further said that to facilitate the general public, this office has already established a telephone helpline (1055) which provides information between 9 AM to 10 PM. He informed that Federal Ombudsman of Pakistan has been re-elected unopposed as President of Asian Ombudsman Association during International Ombudsman Conference held at Istanbul Turkey in December, 2019 which is a great achievement of the country.