* Encroachments are moving here from generation to generation as an inheritance 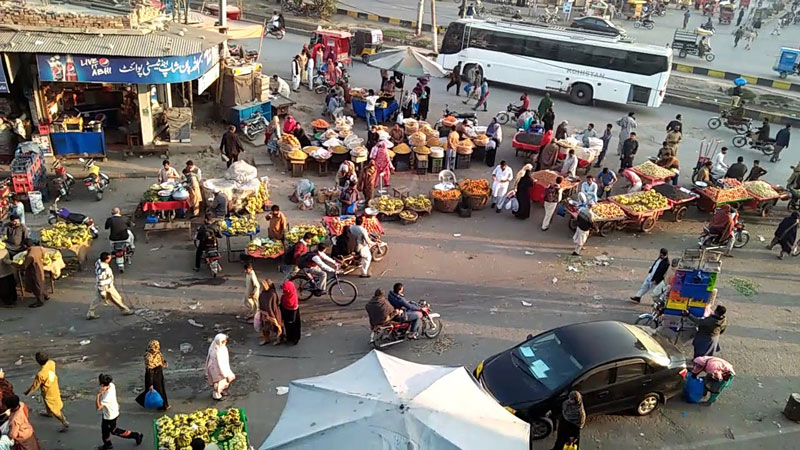 The central eight bazaars of Faisalabad are different from one another and each market has its own identity. The position of each market in terms of trade, business, influence and culture is so different that one cannot forget that the manufacturer is in the market. The names of the eight markets are named according to their direction. It is named after the town which is located on the side. One of these bazaars is the Jhang Bazaar named after Jhang, the city of Heer, the famous folk tale.

There are four narrow and four spacious Bazars in eight Bazars that resemble the British flag. Jhang Bazar is a vast market and this world of openness is also a spectacle.

Encroachments are moving here from generation to generation as an inheritance. A hard-hitting officer arrives and the expedition to a few days ends, and the market is again filled with encroachments.

It’s more than a coincidence that it’s the city of Heer. At the very beginning of the Jhang Bazaar, there’s a flute shop on the right, which attracts people owing to the beautiful sound of flute that comes from there. Millions of businesses operate from this market.

In Jhang Bazar, there is a restaurant near the flute vendor whose chicken is appealing to the eater. Food cooked in ghee and spices attracts food lovers. Cheap garments and cheap vegetables here make this market a public market.

About the middle of the market is the Regal Cinema Building. This cinema dates back to Pakistan. The shining cinema which gives shine to many movie stars is now dormant. Half the building has been transformed into a market and half of the building will be converted into shops and markets after the court decision and Regal Cinema only will remain a memorial.

Regal Cinema where many people have seen the first movie of life. Someone may have gone to the cinema for the first time with his Ami, Abu, and someone would have taken his new bride to see the movie. The bride’s shy eyes will still be remembered like any scene in the film. No one in the cinema will ever forget the movies he has seen with his girlfriend. The ones who used to come here to entertain will spend their time here, knowing that cinema will not exist.

The left side of Regal Road is the shrine of Lassori Shah where devotees come for attendance. Hazen Ludhiani lived in the back alley of the shrine and was home to Nusrat Fateh Ali Khan in the vicinity. Most years of Nusrat’s life were spent here. There are pot shops where new utensils are sold and the old utensils are purchased. Old utensils of brass, copper, bronze, and silver are brought here from all over the city.

The old utensils are burnt to a new mould by fire and then taken by hand. Here are the fish vendors In the cold days, good fish sold. In the middle of the Jhang Bazar are a “Gol Ghee Wala” on the right and a “Gol Lkar Wala” on the left. One, two shops of ghee have been left and the timber in the round wood has expired.

It’s more than a coincidence that it’s the city of Heer. At the very beginning of the Jhang Bazaar, there’s a flute shop on the right, which attracts people owing to the beautiful sound of flute that comes from there. Millions of businesses operate from this market

There was a park in Jhang Bazar, which was in the form of a circle and was known as Gol Bagh, that too long ago ended. Now here is Arshad Bazar, in front of the garden was the goat market where there is now a comprehensive (Jamia) mosque. The people call it the mosque of Maulana Mohammad Sardar Ahmed. Maulana is buried in the compound of this mosque. Maulana Muhammad Sardar came to Faisalabad in 1948 and camped in Gol Bagh.

Thousands of scholars and commentators have graduated from this institution, founded on January 2, 1950, a religious institution called “Jamai e Rizvi Mazhar-e-Salam”. 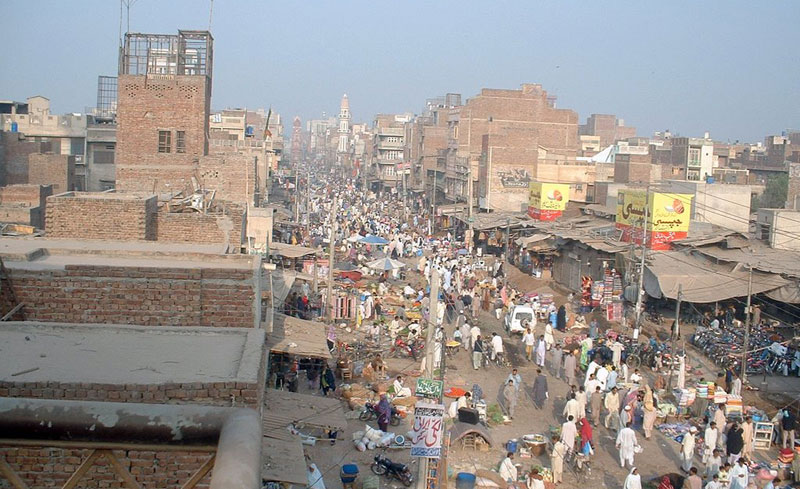 The mosque’s loudspeakers are strongly supported by their stand. But despite this disagreement, people embraced one another; the atmosphere of malice and misery has never been in the Jhang Bazar nor this city.

This mosque has the only bird market in the city where the sale of birds and pets is sold. Furnaces have also been set up to roast “Seeri Paaye” here, so livestock and environmental staff sometimes come to litigation.

The ridiculous action of the municipal corporation staff often continues here. The broken and dilapidated conditions of the corporation are quickly erupting from the front of the car, and after a few steps, the spine and sparrows come on. Don’t know, employees sitting in the car can’t look back and forth… Or governments and government agencies just think ahead and look forward to turning back or looking back.

There are also hardware and children’s toys stores in this Jhang Bazar. It is also noteworthy that children’s toy stores, on the one hand, oppose the purchase of toys and, on the other hand, shopkeepers place a strong emphasis on selling toys. Out of the shop empty-handed stop to catch the customer’s arm so here is a common thing.

Vegetable and fruit prices drop in the evening, so buyers are at night here, and many sellers often attract customers by lowering their bargain prices compared to others.

This is the famous Jhang Bazar in Faisalabad where life looks lively with its many colours overnight.