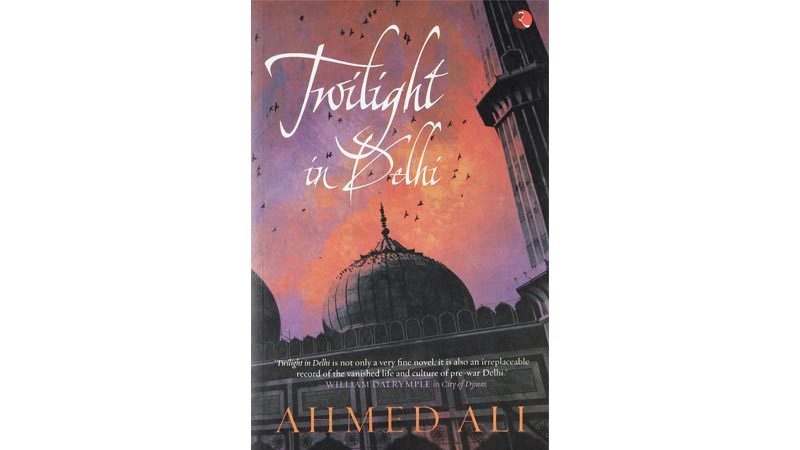 The recent anti-Muslim riots in India, especially in Delhi, reminds me of Twilight in Delhi at the time when Muslim culture was under threat because of the intervention from the British colonialism and the clash of two civilisations and cultures in India, which has been better pronounced as the collision of cultures by Dr David Waterman.

Here, I am m delimiting my discussion to the text by Ahmed Ali that captured and engaged the very moment when the British had assumed the full sovereignty over India under the guise of the civilizing mission of the white man.

It was a total cultural onslaught on the Muslim culture in order to supplant it with the British culture. The very first thing done by the imperial power was the replacement of the Persian and Arabic language from the quarters of power as well as from educational institutions with one stroke of the pen of Lord Macaulay. Now only that person would be called educated who should equip himself with English education and culture.

With the corking of the flow of the stipends for the princes and princesses by the British authorities, the glory of the Muslim culture began to fade away and if at all it existed in some form, it was confined to the households and the few streets of the city. In the absence of any good social bearing and share in the power corridors, Muslims and their families were gradually losing their grip on their culture and civilization.

Ahmed Ali’s Twilight in Delhi Published in 1940 portrays a clear and vivid picture of this moment of change in the socio-political setup of the erstwhile Muslim state and it also digs deep into the efforts of the Muslim to somehow maintain their dignity, on the one hand, and their disappointments and sense of loss, on the other hand, after the British attempted to gain a total control of India.

The protagonist of the novel, Mir Nihal, is typical representation of the Muslim gentry not only in his outer looks but in his outlook towards the rapidly changing world around him. He had realized the difference but, somehow, he was carrying on his life style. He wears traditional Muslim dress and keeps pigeons as a hobby. He also keeps on managing his relationship with a courtesan, Baban Jan. Like a patriarch he manages his home and has strict control on his family. But very soon he falls a victim to paralysis and dies. His wife, is also a staunch up bearer of Muslim culture and respects her husband and loves her family. She however assumes power at certain time because of her age and respect in the family.

With the corking of the flow of the stipends for the princes and princesses by the British authorities, the glory of the Muslim culture began to fade away and if at all it existed in some form, it was confined to the households and the few streets of the city. In the absence of any good social bearing and share in the power corridors, Muslims and their families were gradually losing their grip on their culture and civilisation

The change of the Muslim culture in India is reflected by Mir Nihal’s son, Asghar, who seems to be westernized as he wears English dress and speaks English language and insists on using English manners at his home as well. He is doing job as well in an office being run by the British government. He marries against the will of his father but very soon gets fed up with his wife who dies very soon because of her own nostalgic feelings. Asghar marries her sister Zohra besides having relation with a woman named Mushtri Bai. Other than Asghar, many other Muslim boys have been portrayed whiling away their time while doing nothing.

Women have been shown in a very helpless state not only because of the colonization of India but also because they have to cope with the changing world around them while the world of their household was largely the same. The clash however between the liberal British culture and the conservative Muslim culture had started to show its impact on the Muslim Household as well. Babban Jan dies in a very miserable condition because Mir Nihal gradually become unable to support her. Sister of Asghar was married earlier and became a widow earlier without any chance of remarrying. Mehru the youngest daughter of Mir Nihal is given in marriage to a stranger and she is never consulted for this most important step of her life.

The disease and death of Mir Nihal symbolizes the death of the Muslim culture after it becomes paralyzed while being challenged by the British power and culture. The life style of Asghar represents the change that was gradually changing the Muslim new generation when Asghar becomes a Babu, a term used to describe a man educated on western philosophy yet born of the Indian blood. The mother of Asghar becomes blind gradually which also symbolizes blindness of the Muslim from the change that was coming around them and was changing the face of India once for all. The caged birds of Mir Nihal and their death at the hands of a snake and the cat also talks about the same threat.

While doing so, Ali’s novel becomes a snapshot of the Muslim life in Delhi under the British cultural onslaught, as the case is now in Delhi that efforts are being made to damage Muslim culture and identity in India. But, However, the situation demands to be seen in a different perspective. Ahmed Ali’s novel shows the cultural threat from an alien power of that time but in the current scenario, Muslims are being threatened by the homegrown violence.