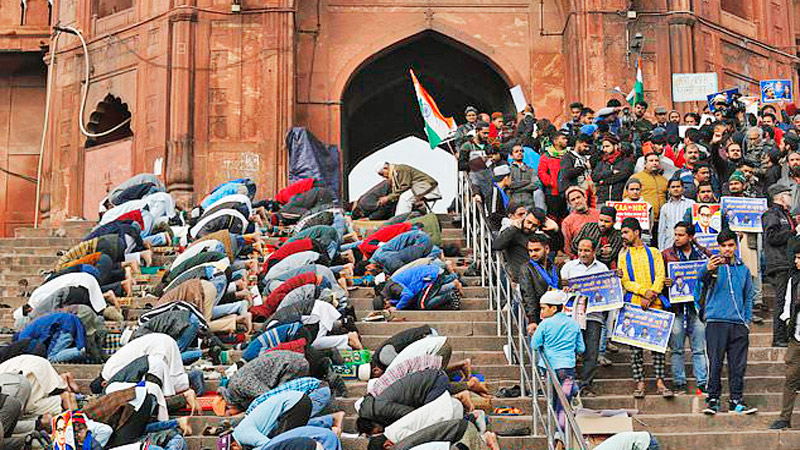 Hundreds of demonstrators perched themselves on the steps of an iconic mosque in the Indian capital on Friday to protest against a new citizenship law that excludes Muslim immigrants.

The protest at the 17th century mosque, Jama Masjid, was led by Chandrashekhar Azad, leader of the Bhim Army, a political party of Dalits who represent the Hinduism´s lowest caste.

“We will continue protest against the law till repealed,” Azad said as he and hundreds of his supporters read out the constitution´s preamble, which says there should be no discrimination on the basis of religion.

Azad was arrested on Dec. 21 after leading a similar protest at the steps of the mosque. He was accused of instigating violence as the protest ended in a clash between the protesters and the police. A New Delhi court ordered his release from jail on Thursday. The court asked him to leave the capital within 24 hours of his release and to stay out of the city for four weeks.

The cleric of Jama Masjid made announcements before Friday prayers that commented on 16 Muslims who were killed in Uttar Pradesh last month during protests against the new law.

“The lives of Muslim youth lost in Uttar Pradesh violence shouldn’t go to waste,” Syed Ahmed Bukhari announced to a congregation of thousands. He added people must “raise their voice against the law in a peaceful way.”

The new citizenship law provides a path to naturalization for immigrants from Bangladesh, Afghanistan and Pakistan, unless they´re Muslim. It has triggered nationwide protests and clashes with police that have led to 23 deaths.

The nationwide protests have brought tens of thousands of people from different faiths and backgrounds together, in part because the law is seen as part of a larger threat to the pluralistic social fabric of Indian society. Thousands of Hindus, too, have joined the protests to assure minority Muslims that they are not isolated.

Modi’s party downplays the protests, saying they are orchestrated by opponents.

Meanwhile, hundreds of women continued with a sit-in on a road side in New Delhi, braving freezing temperatures and attempts of law enforcement agencies to break them up for almost a month. Emulating their example, women across the many Indian states and small towns have carried out similar sit-ins in protest against the law.

Also Friday, the Congress party, which is the governing party in northern Punjab state, adopted a resolution in the state legislature demanding scrapping of the controversial law, known as the Citizenship Amendment Act.

“The CAA enacted by Parliament has caused countrywide anguish and social unrest with widespread protests all over the country,´´ the resolution said.

On Tuesday, the southern Indian state of Kerala became the first to legally challenge the new law. In a petition to the Supreme Court, the state government said the law violates the secular nature of India’s Constitution, and accused the government of dividing the nation along communal lines.