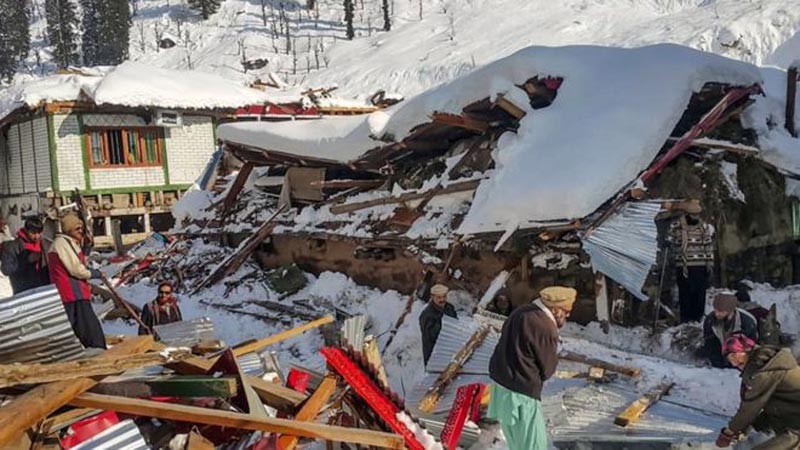 Another 76 were injured across Pakistan, with several still missing. Forecasts suggest more harsh weather is on the way. Azad Jammu and Kashmir is the worst-hit area, with 62 people killed and several others missing, the State Disaster Management Authority said in a statement.

In the Neelum Valley in Kashmir, heavy snowfall triggered several avalanches, including one that killed at least 19 people. “An avalanche hit their village, 10 people are still missing,” the SDMA said.

Ahmad Raza Qadri, the minister for the disaster management authority in Kashmir, said they had declared a state of emergency in the affected areas. “Rescuers are facing difficulties in reaching the stricken villages,” he said,

Military helicopters were being used to evacuate people as authorities struggle to reopen highways and reach people cut off by heavy snowfall and avalanches in Pakistan. Authorities have shuttered schools, while several highways and roads were closed across the country’s northern mountainous areas, according to officials. “The severe snowfalls and landslides in AJK have caused misery & deaths,” tweeted Prime Minister Imran Khan.

Rescuers managed to extract more than 50 people from the snow and airlifted them out of the area for treatment. Authorities also scrambled to provide relief to local people with another spell of heavy snow expected on Friday.

At least 53 houses had been completely destroyed by avalanches in Azad Jammu and Kashmir (AJK), officials said. “I have asked the National Disaster Management Authority, the military and all our federal ministers to immediately provide all humanitarian assistance on an emergency footing to the affected people in AJK,” Prime Minister Imran Khan tweeted.

AJK Legislative Assembly Speaker Shah Ghulam Qadir, who has returned from Neelum Valley, was in Islamabad on Tuesday to coordinate with the federal government authorities, including the National Disaster Management Authority (NDMA), to extend all possible assistance to the affected population. He said that the rescue operation had almost been completed with the help of the army and civil administration but the next and real challenge was the relief operation, which too would be accomplished before Friday when another spell of heavy snowfall is expected.

To the southeast, in Balochistan province, at least 31 people had been killed in separate weather-related incidents. “Most of those who died were women and children,” said Mohammad Younus, an official with the provincial disaster management authority, adding that hundreds remained stranded. The disaster management authority declared an emergency in seven districts of the mineral-rich province and sought the army’s help for relief and rescue operations. Key highways connecting Pakistan and Afghanistan were blocked due to heavy snow, forcing officials to suspend transportation of essential goods into Afghanistan.

According to ISPR, the army chief has expressed grief over the loss of lives due to intense snowfall in Azad Jammu and Kashmir and Balochistan. He also offered condolence to the bereaved families. The army chief gave directions for continued assistance to the civil administration for rescue and relief operations. “Army helicopters are undertaking operations in snow hit areas of Sharda, Sargan, Bakwal and Taobat,” said the ISPR, adding that Pakistan Army Urban Search & Rescue teams are evacuating stranded population. The ISPR said that doctors, paramedics, tents, rations, blankets, and medicines are being provided to the affected families.

Meanwhile, the spokesperson for Balochistan government, Liaquat Shahwani, said 20 people had lost their lives in the province in snowfall-related incidents. He added that Chief Minister Jam Kamal Khan was personally overseeing the relief work being conducted in the province. “We are doing everything we can within the resources available to us,” Shawani said while adding that work is being done to restore access to far-flung areas of Balochistan.

“Most of those who died were women and children,” said Mohammad Younus, an official with the provincial disaster management authority, adding that hundreds remained stranded.

Major thoroughfares in Balochistan, including Bolan Road, Khanozai Road and Quetta-Chaman Road have been closed for the time being, the statement said, adding that the most snowfall recorded in Khyber Pakhtunkhwa province was at Lowari Approach Road at a whopping 23 inches.