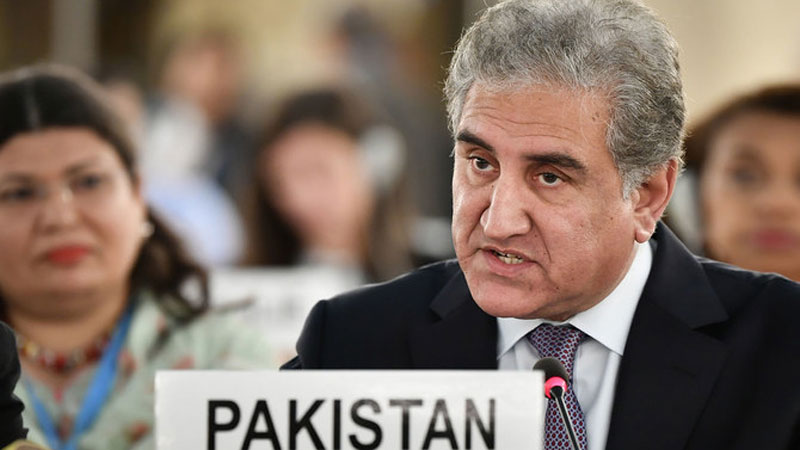 Foreign Minister Shah Mahmood Qureshi Monday said Pakistan will not allow use of its soil against any other country, and urged the United States and Iran to abide by the United Nations Charter and international laws for peaceful settlement of the differences.

The minister, in a policy statement in both the houses of the Parliament on the Middle East situation, called upon the international community, particularly the UN Security Council, to play their role for the regional security. He said a task force has already been established at the Ministry of Foreign Affairs to monitor and assess the developments in the region.

The foreign minister viewed that further action from any of the two sides will never be in favour of the region and that the use of force is not a solution to the conflict. The parties concerned will hopefully exercise restraint and avoid the escalation of situation as the region cannot afford any adventurism, he said, adding that the current regional situation is a threat to the world peace.

Foreign Minister Qureshi spelled out 11 points which he said reflect why Pakistan is concerned about the US-Iran tensions:

The incident will further destabilise the region, especially the situation in Iraq and Syria; the crisis can have a negative impact on the Afghanistan peace process and Pakistan’s efforts in this regard can be undone; the situation in Yemen van get out of hand and attacks by Houthis on Saudi Arabia can increase; Hezbollah, which has in the past conducted rocket attacks, can go ahead and strike Israel; the situation can lead to high-profile assassinations of US personnel in the region; route blockades can be enacted leading to breakage in oil supply, which will have a negative impact on the regional and global economy; Iran nuclear deal has come under severe pressure with the latest announcements coming out of Iran suggesting Tehran has virtually backed out of the deal that put restrictions on the country’s Uranium enrichment; crisis can lead to terrorism rearing its head again in Pakistan; the developments have raised the chances of further division of the Organisation of Islamic Cooperation; the situation has also impacted the Pakistani government’s efforts to unite the forum of OIC on the human rights violations in India-held Kashmir; and India may pounce on the chance to destabilise Pakistan and conduct false-flag operations.

Qureshi said according to regional experts, the repercussions of the strike that killed Soleimani can be more severe than the 2011 raid that killed Al Qaeda leader Osama bin Laden and the 2019 killing of militant Islamic State group chief Abu Bakr al-Baghdadi. He said Iraq has decided to send its foreign minister to the United Nations to record protest because in their view the strike violated international law and the UN Charter. “I decided to contact the important foreign ministers of the region. I talked in detail with the Iranian foreign minister and presented Pakistan’s stance on the incident and gained information from him,” he said, adding that he also spoke with the foreign ministers of the United Arab Emirates, Turkey and Saudi Arabia. “The situation in the Middle East is very sensitive, fluid and concerning,” he said.

He recalled that the Iranian supreme leader has promised revenge over Soleimani’s killing while Iranian President Hassan Rouhani has termed this strike as ‘international terrorism’. The Pentagon, on the other hand, has acknowledged that the strike was carried out on the direction of US President Donald Trump, he said. “The White House stated that it was a ‘decisive defensive action’. These tensions have not arisen overnight but the situation has been intensifying over a period of time,” the foreign minister said, adding that this specific act by the US has aggravated the situation in the region. Sharing Pakistan’s perspective, Qureshi reiterated Islamabad’s readiness to continue to play a role in preventing further escalation, and maintaining regional peace and stability. He said Pakistan will not support any unilateral action, which can undermine the regional peace as the use of power will further destabilize the region. He said Pakistan can support the peace building and de-escalation efforts, but not any move for further tension.

He urged the United Nations (UN) secretary general to play a vital role in peace building. He said Pakistan is making efforts for a vibrant role of the Organization of Islamic Cooperation (OIC). He assured the parliament that the Pakistani nation and the army are fully alive to the ongoing situation, and are capable enough to defend their homeland in case of any misadventure by India. He said all the opposition parties have played a key role on the Kashmir issue, and hoped for a positive and responsible attitude on the emerging situation. He said the European Union has also expressed reservation over the situation in Middle East. He also asked the opposition to forward their suggestions on the issue.

Later, Leader of Opposition in Senate Raja Zafar ul Haq said Pakistan should play its effective role in reducing tension between Iran and the US. He urged the government to contact with the leadership of different countries to formulate future strategy. He said the session could also be held in-camera for a debate on tensions in the Middle East.

In National Assembly, PML-N leader Khawaja Asif said the US brought devastation in Iraq, Afghanistan and other countries on one or another pretext and has now attacked Iran. He regretted that Pakistan’s foreign policy is not clear, and urged the government to adopt a clear stance.