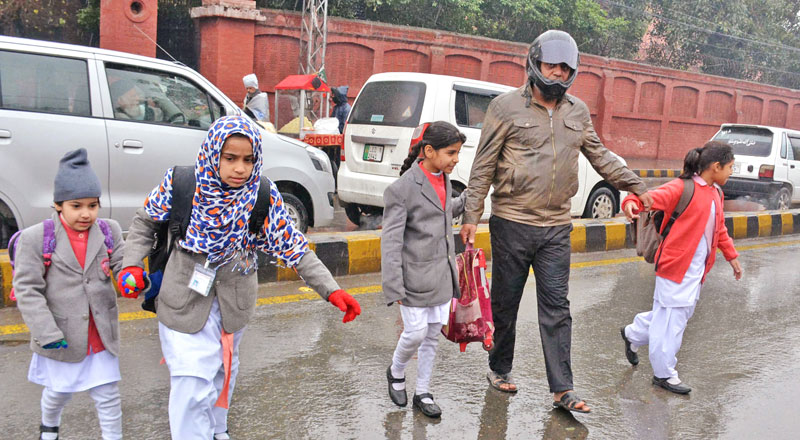 The School Education Department of Punjab has announced to extend the winter vacations due to the harsh weather while directing all the government and private schools to remain closed till January 12.

The decision was taken due to the recent cold wave across the province as the winter rain also hit some parts of Punjab that forced the School Education Department to issue a notification in this regard on Monday.

“In the wake of weather conditions, the winter vacations are hereby extended w.e.f 07.01.2020 to 12.01.2020 in all public and private schools in Punjab. All schools (Public & Private) shall re-open on 13th January, 2020,” reads the notification issued by the School Education Department.

It is pertinent to mention here that Minister for School Education Dr Murad Ras has earlier made it clear that the winter vacations will not be extended in the province. He made these remarks while addressing a press conference in December when he was asked regarding any extension in the winter vacations. The sources in education department claimed that the government extended the winter vacations due to the infrastructure problems of public sector schools as some schools don’t have walls, doors and windows. The fear prompted the government to extend the vacations as students may face the harsh weather due to the non-availability of basic infrastructure in public sector schools.

The attendance of students remained extremely low when the schools opened on Monday after two-weeks vacations as the rain lashed at some parts of the province. Minister Dr Murad Ras announced from his twitter account that the winter vacations have been extended in the province.

The Pakistan Meteorological Office has predicted widespread rain in next 24 hours in some parts of the country including the Central Punjab and snowfall is also expected in hilly areas. The Punjab government had earlier announced 15-day winter vacations across the province starting Dec 20, 2019 till Jan 5, 2020. The new notification issued by the Punjab government has further extended vacations till January 12. The notification was forwarded to all deputy commissioners and other officials of the provincial government as stern action would be taken in case of non-compliance.

Meanwhile, the private schools have criticized the government’s notification of extending vacations as they said that it will not be good for the education of students as their exams are just here. Talking to Daily Times, the President of All Pakistan Private School Management Association (APPSMA) Kashif Adeeb Jawdani said that the government took the decision without consulting us despite the fact that we are major stakeholders. “We had written to the government almost a month ago to announce two-week vacations starting from first January but it ignored our suggestion that was purely based on our past experiences,” Jawdani said. He further added that the government made the decision abruptly and it would definitely effect the academic year of students as the matriculation exams are also starting in February. The government should now extend the dates of matric exams for one month otherwise the result of students will be affected, he said. We’ll now observe the winter vacations in the public interest but in protest, said Jawdani. The President of Punjab Teachers’ Union Kashif Shehzad Chaudhry also demanded one-month extension in the matric and middle examinations due to these abrupt winter vacations.