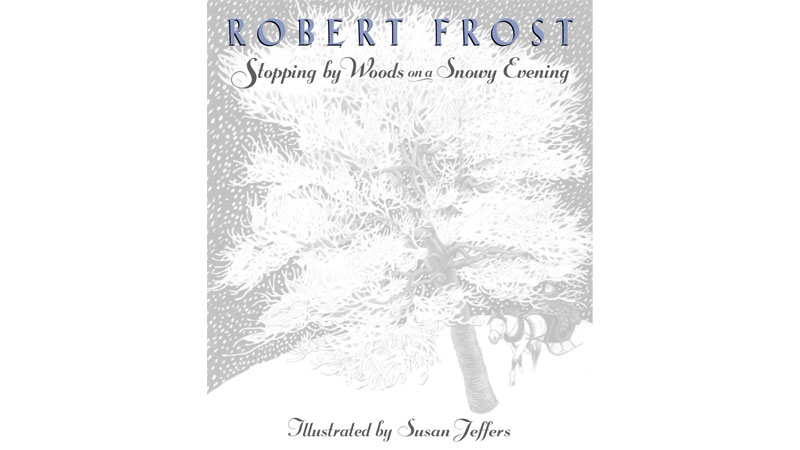 Robert Frost, also known as the Nature Poet was unlike any other. We find a very natural element in his poetry, and according to John F. Lynen, Frost has such excellent poems about natural scenery and wild life, “that one can hardly avoid thinking of him as a natural poet”. We can also find an element of Modernity like his Pastoral Technique, Attitude towards Nature-Realism and a Metaphysical technique in his poems. His poetry is also ripe with symbolism, one such instance is in the poem, “Stopping by the Woods on a Snowy Evening”. He is known as a Lyrical Genius because of his use of pure lyrics that are personal and subjective in their simplicity, intensity, and melody. Frost is also known for his dramatic diction and versification and the use of Juxtaposition of opposites.

Whose woods these are I think I know.

His house is in the village though;

He will not see me stopping here

To watch his woods fill up with snow.

My little horse must think it queer

To stop without a farmhouse near

Between the woods and frozen lake

The darkest evening of the year.

He gives his harness bells a shake

To ask if there is some mistake.

The only other sound’s the sweep

Of easy wind and downy flake.

The woods are lovely, dark and deep,

But I have promises to keep,

And miles to go before I sleep,

And miles to go before I sleep.

Robert Frost’s “Stopping by The Woods On a Snowy Evening” depicts the theme of obsession and the success of that obsessed mind to get rid of its obsession, thinking about the promises which the speaker must keep. Here the most important part lies in the symbolism of ‘conscience’ by the ‘little horse’. This conscience compels the badly obsessed mind to think and so the mind thinks and realizes the pointlessness of being obsessed. Frost presents the speaker of the poem as a horse rider who is tempted to stay longer by a lovely scenic view on a snowy evening. But his little horse’ shaking of its body shakes the mind of the traveler, and he realizes the pull of his own obligations and the considerable distance yet to be covered. This stopping resembles the theme of obsession as an obsessed mind stops thinking of anything else, and the realization of the mind in the last stanza suggests succeeding in getting rid of that obsession.

Starting off the poem with a possessive pronoun is a brave and unusual thing to do but Frost manages to make it work, immediately grabbing the reader’s attention. It is as if the speaker is sitting close by, thinking out loud, perhaps whispering. But this initial thought isn’t crystal clear, the speaker only thinks he knows who owns the woods – the first piece of uncertainty is introduced – and he’s making this statement to reassure himself as he comes to a stop, pausing his journey. There is a calm, slightly mysterious atmosphere created by the second, third and fourth lines, all suggesting that the owner of the woods lives elsewhere and won’t see this visual ‘trespasser’ near the woods.

Starting off the poem with a possessive pronoun is a brave and unusual thing to do but Frost manages to make it work, immediately grabbing the reader’s attention. It is as if the speaker is sitting close by, thinking out loud, perhaps whispering. But this initial thought isn’t crystal clear, the speaker only thinks he knows who owns the woods — the first piece of uncertainty is introduced — and he’s making this statement to reassure himself as he comes to a stop, pausing his journey

It’s as if there’s something clandestine going on, yet the image presented to the reader is as innocent as a scene on a Christmas card. The rhythm of each line is steady, without variation, and there is nothing odd about it at all.

The second stanza focusses on the horse’s reaction to the rider stopping. Enjambment, when one line runs into another without a loss of sense, is employed throughout. In effect, this is one long sentence, the syntax unbroken by any punctuation.

Again the tetrameter reassures and lulls the reader into a false sense of security – the language is simple yet the meaning can be taken in two ways. Queer is a word that means odd or strange,, and the implication is that this person doesn’t ordinarily stop to admire the view; he only stops at farmhouses, to visit, to feed or to water the horse. Why stop tonight of all nights? It’s December 21st, winter solstice and the longest night of the year, midwinter. Or is the word darkest misleading the reader? It is certainly winter, we know from the snow and cold, but darkest could also mean that it is really late at night and so the sky is extremely dark. Here sits the rider on his horse in what appears to be inhospitable countryside, staying too long, thinking too much. The use of long vowels also reinforce the lingering doubts of the horse.

The horse is uncertain, it shakes the bells on the harness, reminding the rider that this whole business – stopping by the woods – is a tad disturbing. This isn’t what they normally do. This is unfamiliar territory.

It takes a creature like a horse, a symbol of intuition, noble grace and sacrifice, to refocus the rider’s mind on reality. They ought to be moving ahead; there’s something about the way this person is fascinated by the woods that worries the horse, apart from the cold and dark.

There is no logical or direct answer given to the horse, there is just the speaker’s observation beautifully rendered in lines eleven and twelve, where alliteration and assonance join together in a kind of gentle sound dance.

The final quatrain has the speaker again reaffirming the peace and haunting beauty of the snowy woods. On another night perhaps he would have dismounted and gone into the trees, never to return? The lure of nature and the distraction from the everyday, is a strong theme; how tempting it is just to withdraw into the deep silence of the woods and leave the responsibilities of work and as well as stress behind?

But the speaker, the rider, the contemplative man on the horse, is already committed to his ongoing life. Loyalties forbid him to enter this dream world, as much as he would love to stay and take it all in and melt into the snowy scene, he cannot. The last repeated lines confirm the reality of his situation. It will be a long time before he disengages with the conscious world. Stopping by the Woods on a Snowy Evening has four stanzas, all quatrains of iambic tetrameter, each line has four beats, stressed syllables, maintaining a regular rhythm within the poem, perhaps suggesting the plod of a slow moving horse.

Rhyming words are very important in this poem as they contribute to the opposites of moving on or stopping, a major theme. In the first three stanzas the third line of each does not rhyme with the opening two lines and the last. It creates an obstacle and temporarily stops the smooth flow. Yet, this third line is a connecting link to the other stanzas. The rhyme scheme is aaba bbcb ccdc dddd.

All the lines have a particular flow and there is no punctuation to create pauses (caesura), suggesting a continuation of life, a smooth familiar routine. Personification is present in the third stanza, lines nine and ten – the horse gives a shake as if to question why they have stopped. There are also several examples of Alliteration as well like: Whose woods/His house/watch his woods fill up with/He gives his harness/dark and deep.

The poem doesn’t have any metaphors. However, there are two extended metaphors in the poem. The last line of the third stanza, “sweep of easy wind and downy flake” and the second metaphor is used in the last line with repetition, “and miles to go before I sleep.” Here, miles represent life’s journey, while sleep represents death. Imagery is used to make readers feel things through their five senses. The poet has used images for the sense of sights such as the woods, house, lake, and they help readers see the woods as a source of solace and comfort to a lonely traveler.

Euphony refers to the sound that is pleasing to the ears. While the journey through the forest is one of loneliness, according to Robert Frost, the woods are not haunting or even scary but provide comfort and calmness. The woods also represent an uncorrupted world that the traveler wishes to stay in.

Concluding the analysis, it can be stated that Frost has beautifully used various literary devices to make his poem a great piece of literature and has given readers room to think and make their own assumptions and judgements about his poem.

The writer is a student of English Linguistics and Literature at Air University. She can be reached at haniahajra123@gmail.com