Musings is a collection of cultural and social issues 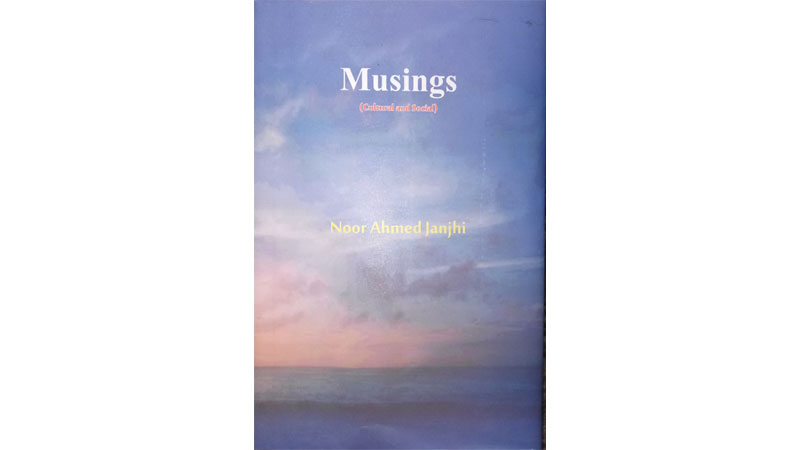 Musings, a collection of social and cultural essays decorated with the flowers of poetry is written by a well-known and renowned Pakistani author Noor Ahmed Janjhi.

Mr. Janjhi is a versatile author from a rich cultured area of Sindh known as Thar. He has rendered valuable contributions in the field of Linguistics, Folklore, Folk Literature, Latif Studies, Rumi Studies, Ayaz Studies, Editorship, Translation, Lexicography, and Teaching. His research work on the sociological aspects of folk songs and folk literature is worth to be mentioned. His writings on the social mobilization and rural dynamics of Sindh society and the role of youth in it are a valuable pursuit. In the field of lexicography, his work as the contributor of two bilingual dictionaries published by Oxford University Press and as a member of Sindhi Language Authority for the compilation of “Mufsil Sindhi Lughat Board” is commendable.

Noor Ahmed Janjhi starts his book with a discussion on the Sur Marui of Shah Abdul Latif’s poetry from new perspectives. He has depicted the picture of circumstances of Marui in the imprisonment of Umer very fairly. He has also discussed the main theme of Marui’s story that is “Sacrifice everything for the sake of your dear homeland.” Furthermore, he has also studied the Sur Sarang of Latif’s poetry very deeply. Sur Sarang is about rain, rainy season and the prosperity that rain brings in deserted areas. Janjhi regards rain as a blessing because it spreads love and brings heydays. In his essay “Tale of two Skylarks,” Janjhi introduces us to a notable Sindhi poet Hassan Dars. He equates Dars with skylark, the bird who sings sweet songs high in the sky. Dars’s poetry was also sweet and profound like those skylark songs. He also talks about the folklore and folk songs. He complies with deserted areas the main cause and origin of folklore and folk songs. He riffles the knowledge, love, and motivation hidden in folklore profoundly. And feels the dire need for proper preservation and documentation of folklore as it is a great heritage. Additionally, he discusses a folk song Chirmi. In which gold and chirmi, a domestic red seed found in deserts, confront each other to decide who’s more beautiful and superior. Janjhi drives a lesson from folk song chirmi that the widening space between nature and human beings is the cause of many dangerous things like climate change and drought etc. We should care about natural resources and not exploit them for our interests. Moreover, he also talks about one another folk song Baadliyo. Baadliyo depicts the picture of drought conditions in deserted areas when it does not rain. In these drought conditions, people migrate in the search of water and husband goes faraway to earn the bread for his dependents, in this way song also shows the longing of wife for her husband.

In the essay, “Language, a bridge for peace-building, reconciliation & development”, Janjhi elaborates on the importance of indigenous languages for sustainable peace, prosperity, and development. According to him, indigenous languages provide multicultural context and this context provides an environment for peace-building and reconciliation. He has also highlighted the independence war fought in Parkar between invaders the British and local people, the Sodhas of Parkar, a region of Thar, in 1859. Though in this uprising Sodhas were defeated by the British but still it’s a landmark in the history of independence of Sub-Continent because it was initiated by local people. With this, he has also mentioned about the cultural heritage of Tharparkar, its folklore, folk songs, and folk literature. He has given enough information about architecture, social setup, languages, arts and crafts, festivals, and traditional music and dance of Tharparkar. He studies the geophysical zones and languages of Tharparkar. According to him topographical zones of Tharparkar can be divided into ten zones namely; Mohrano, Kasue, Wango, Samroti, Watt, Rann of Kutch, Parkar, Kantho, Dhatt, and Khaurr. And the main languages are Sindhi, Dhatki, Parkari, Balochi, Siraiki, Gujrati and Loharaki. Janjhi’s suggestion for preserving this cultural heritage through ecotourism is worth to be noted.

Janjhi’s knowledge in the world of Sufism can be seen from his discussion on the Oneness in his essay “For we are one”. Here he gives a detailed account of impacts of Oneness on Sindhi poetry by quoting some verses from Latif’s poetry. Besides that, he talks about two universal gifts of God that everyone has in common irrespective of their religion, caste, and creed. These two gifts are time and dreams. And unfortunately, man is now using these gifts for the deterioration of the world. The increasing number of nuclear weapons is a big threat to the whole world and it is due to the utilization of dreams and time to invent these weapons. Here Janjhi emphasizes the proper use of time and dreams for the betterment of society. According to him, a war, discrimination, hunger, poverty, illiteracy, corruption, and terrorism free world can be possible if and only if every human should step-down from the ride on the horse of greed. Lastly, in the ending essays of the book, he renders the worsening images of Tharparkar during famine and drought times. And also suggests some remedies for these havoc problems of Thar.

All the essays of Janjhi are marvellous in their way. His vast and broad observations can be noted in his essays. He sees each and everything with a new dimension. And above all, the flow in his sentences is what makes this book special and easy to understand. This book “Musings” is also very helpful for the aspirants of competitive exams because it opens the mind of readers to judge everything from a new angle. It helps to create argumentative thoughts and helps to enhance critical thinking. Almost in all essays of ‘Musings’ Janjhi talks about the betterment of the people of his dear land Thar. So, he can be regarded as the ambassador of the indigenous people of Thar.