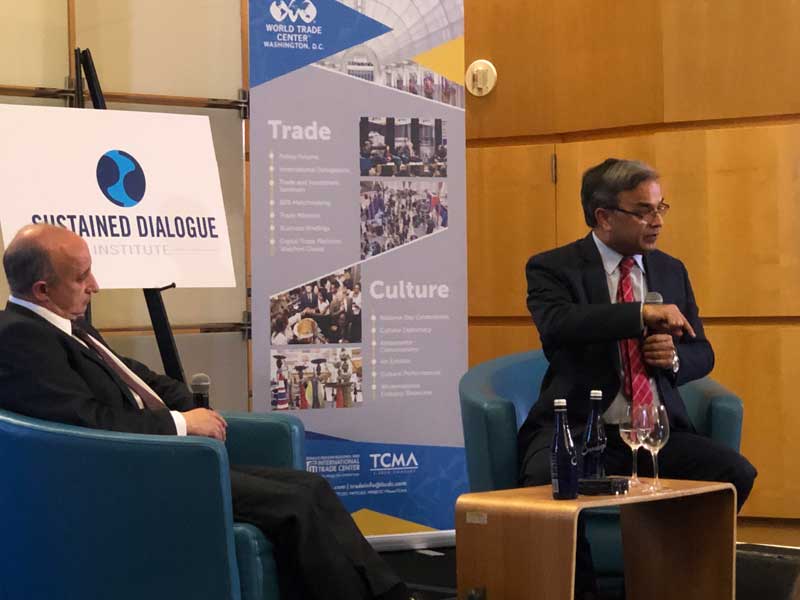 Prime Minister Imran Khan has created “an environment of trust” between the US and Pakistan, said Pakistan’s Ambassador to the United States Assad Majeed Khan while speaking with Reverend Mark Farr, president and emcee at Sustained Dialogue Institute (SDI), a Washington-based think tank.

The two countries are enjoying a renewed relationship following the summer visit of PM Khan to the United States to meet US President Donald Trump.

Previously, both countries had not “stuck to their word.” But now Prime Minister Khan has established “trust” where the relationship is “clear about expectation and delivery,” he said.

Historically the relationship has been focused on security but now as the relationship develops, Pakistan aims to “build bigger and equal pillars in education and business.” He said Education and Business are now Pakistan’s priorities, “they are pillars we want to focus on and strengthen to become larger and equally as strong as security.” Khan said.

He emphasized. “Pakistan is the largest recipient of the Fulbright programme”.

Speaking on the importance of the UN Khan warned, “multilateralism across the world is under stress, because of the fragmentation across the globe… countries tend to look inwards not outwards.”

This international trend he explained marks the important role the United Nations plays on a global scale. It is crucial to the “global problems beyond the capacity of a single country” he said. He lauded the UN’s rapid response in the aftermath of 2010, Pakistan floods, which happened to be The worst devastating floods in Pakistan’s history. They were the first to respond and help the 20 million people displaced.” Khan said.

Speaking on the Kashmir, Khan said “India and Pakistan must have a dialogue to resolve the issue.” He highlighted P.M Khan was one of the first leaders to congratulate India’s Prime Minister Modi, following his election victory. Pakistan has repeatedly reached out to India to initiate a dialogue. Despite PM Khan’s efforts India has failed to respond to Pakistan’s peace overtures.

Speaking on religious freedom and tolerance in Pakistan, Khan said although Pakistan is a majority Muslim country, “Pakistan respects the rights of other religion and minority groups.” He noted the recent special appointment of a ‘Special Representative for International Religious Freedom’ (SRIRF) by PM Khan.

Pakistan’s Supreme Court and the constitution are very clear about the laws for minority rights groups and other religions. Khan explained.

He cited an example of a provincial minister who was dismissed from his post after making a “politically insensitive remark against minorities.”

Khan highlighted how Pakistan’s leaders have participated in religious celebrations with other faiths, “Both P.M Khan and the army Chief have attended and celebrate minority festivals.” He said and described the Christmas and Diwali festivals attended.

Responding to a question on Christians who were targeted in the past for their faith, Khan said, “that is not who we are… growing up I attended a missionary school and some of the best schools and most respected schools in Pakistan are Christian … religious regression was not something experienced only in Pakistan… this is a much larger and global phenomenon,” he said. “But we have worked hard and have moved on,” he said.