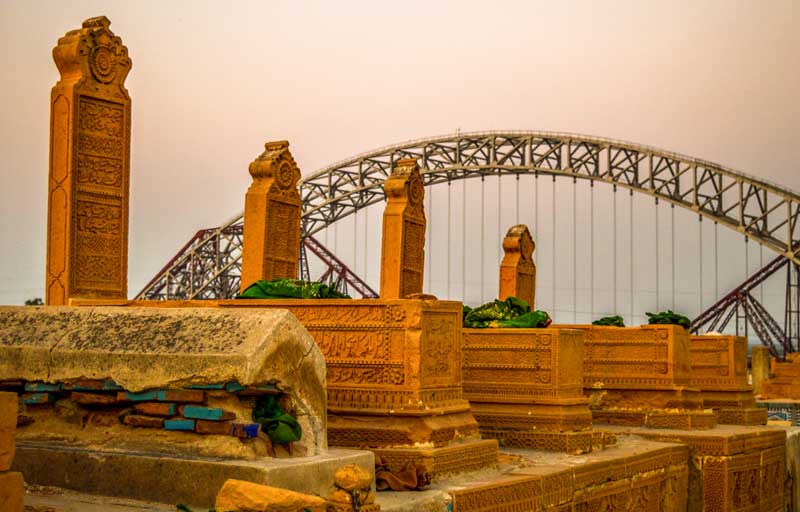 The Tomb of Seven Sisters is known in Sindhi as Sateen Jo Aastan and is located on the left bank of the Indus River near Rohri Sindh Pakistan.

Many stories and myths shroud the graves at the Sateen jo Aastan. Sati in Hinduism is called a widow who burns herself or along with her husband’s dead body by others “Pyre” but a place in Rohri city known as Sateen Jo Thaan or Sateen Jo Aastan as folklore explains the history behind it as a story.

Seven sisters lived in a big house in Rohri on the bank of River Indus.

From the beginning, those seven sisters always observed parda.

A Raja at that time came to know about their beauty and he was very crucial he ordered his people to bring those seven sisters in front of him, when those seven sisters heard they became very scared and they started to pray Allah that we don’t want to be in the hands of that Raja. we have protected our self from the eyes of any male and we are sacred from all these things to help us. Suddenly the earth or that mass of land turned downward and those seven unmarried sisters died or rather disappeared. No one knows how the earth turned down and suddenly those sisters disappeared when the people sent by Raja reached there they were amazed to see there was no house neither the seven sisters were present.

From the beginning, those seven sisters always observed parda

In (961 A.H) Mir Abu-al-Qasim ordered to build the tomb of those seven sisters at the same place, the material is used similar to the material used in Makli Hill Graveyard, and in the same way the Quranic verses are also written on their tombs and the interior or on the structure. The blue colour marble mostly used in Sindh and known as the symbol of Sindhi Culture is used in a tomb. The grand floor is distributed in the Rooms for the visitors to stay or rest. Other than that on the other side of the tomb, the coloured rooms which are being closed all the time were the residence of those seven sisters. Although the place is not too big in size, the Indus River has made it so beautiful and peaceful. Visitors feel relax and can see the blind dolphins in the Indus river from the first floor, you can have a look of lance down the bridge of Sukkur the city which is very much famous.

The Mir Qasim wanted the tomb should be known as Qasim hill but it was not possible still it is called Satin Jo Thaan (Astana).

The graves of the seven sisters lie are inside the cave, where neither man nor camera is allowed. Only women can visit graves and pray there to their heart’s content. Sateen jo Aastan is reputed for its mystical powers and women from as far as Balochistan come to visit.

A small mosque on the upper level and the western section is profusely embellished with blue, turquoise and white tile-work. Tradition states that when the Mir completed this fine complex, he would retire to it on full moon nights with friends and courtiers and entertain them to music, mangoes, sweets, honey, and watermelons. The grand remnant of a bygone era is, unfortunately, in a state of ruin though it is a popular resort for picnickers and tourists.

On one of the smaller hills that arises out of the riverbank on the south has a leveled platform on which there are many carved gravestones like those on the Makli Hill at Thatta with chain ornaments and panels of Arabic quotations from the Quran. The entire space between the graves is paved and a flight of stairs leads up to the platform from the southside. Enameled tiled work is freely used on these tombs, most of which are dated between 1609 and 1883 AD. The principal grave is that of Mir Qasim one of the Sabzwari Shahids dated 1018 AD. This was probably the grave that sanctified the place, and the lamp post and lamp that were placed in front of it are still there, and it gives the name of Than Qasim Shah to the hill. However, it is more popularly known as the hill of the seven virgins. 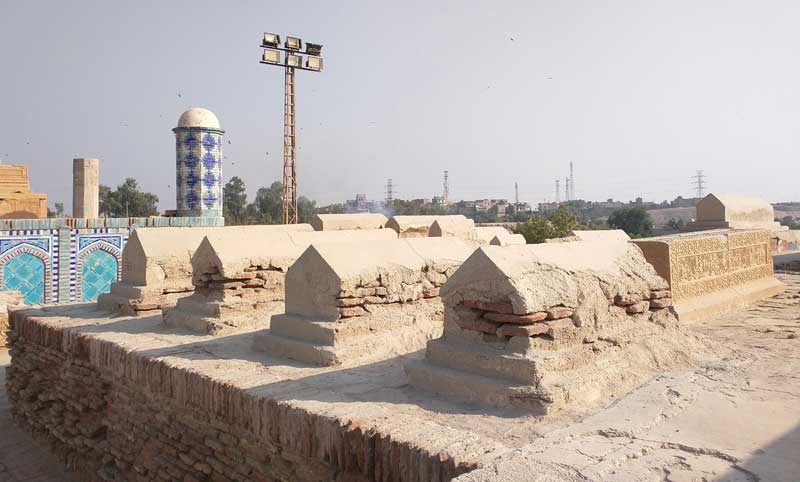 The building on the southern side of the hill is called Satbhain, which consists of a row of shallow rooms connected externally with coloured tiles. These cells are said to have been occupied by the seven Sisters.

The writer visited the historical place with the group of Reunion of 6th Batch Chankda Medical College under the host of Sukker Chapter led by Dr.Abdul Wahid Abbassi, Dr. Abdul Aziz Memon, Dr. Ikram Bhurgeri, Dr.Sun Mukh Das and Dr. Agha Saeed Pathan. This historical place is on the list of World Heritage, though the story of this place is very old and acceptable. We can not forget that Historical Story was helped by GOD.

But Sorry to say that the Government is not paying attention to this precious place the Satin Jo Aastan need to repair as it is on the bank of Indus river, its infrastructure is damaged due to floor water some of its areas are breaking. The government should look after these things because of these places reflect our culture, religious and our historical stories which happened in the past. And it’s also our responsibility as well to protect these places from damage.

The writer is a retired officer from Sindh Government’s Health Department. He can be reached on contact.abdulrazak@gmail.com