The miseries of Sindhi Women 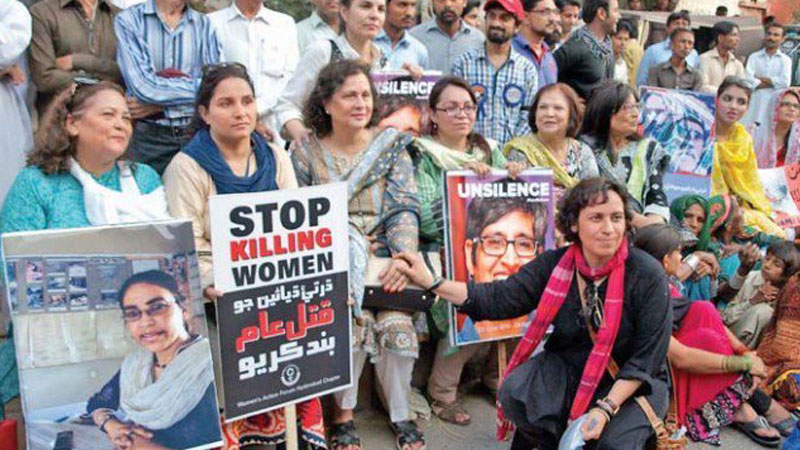 For a decade, the people of Sindh have been celebrating the Sindhi Cultural Day in the month of December every year. In 2019, the cultural day was celebrated on December 1 in Sindh and the world over wherever Sindhis are living. Although celebrating the cultural day is good to maintain a bond with someone’s cultural identity, but at the same time, we must not forget that the Indus Civilisation, through excavations of Mohenjo-daro, reveals how the women of Indus lived their lives independently. One example in this regard is the statuette of a dancing girl, which was discovered by the British archeologist, Ernest Mackay, in Mohenjo-daro in 1926. Although the statuette of a dancing girl is exhibited at the National Museum of New Delhi, India, it is very clear that as it was discovered from Mohenjo-daro, the statuette represents the civilisation of the people of Sindh. The discovery of jewellery and other ornaments from Mohenjo-daro depicts that the status of women five thousand years ago was better than it is in today’s age.

This is the same Sindh where despite proudly celebrating cultural events by associating with the five thousand-year-old civilisation of Indus, Sindhi women are still unsafe. According to the Human Rights Watch, 1,000 incidents of honour killing occur every year in Pakistan. Unfortunately, Sindh ranks second after Punjab in these killings in the name of so-called honour. Apart from cases of honour killing, Sindhi women also face many other issues; hundreds of Sindhi Hindu girls have been abducted and then forcibly converted to Islam. It is true that Hindu girls and women face more repression as compared to Muslim females, but Muslim women also face many issues at the hands of men, ranging from domestic violence to abduction and killings.

Tania Khaskheli was a Muslim Sindhi girl who was shot dead in front of her family members by a landlord for refusing to marry him. The ‘crime’ of the girl simply was that she did not surrender to the landlord, Khan Noohani, who was continuously harassing her. Even when the alleged murderer entered Tania’s home along with his accomplices, she resisted and tried to escape but was shot by Khan.

The story of Tania Khaskheli is not of the old times when bonded labour existed in Sindh; this incident happened only two years ago, in 2017, in the Jhangara village of the Jamshoro district, the same district Chief Minister Sindh Murad Ali Shah belongs to.

In the same year, another incident happened at the University of Sindh, Jamshoro, where the dead body of a girl student, Naila Rind, was found in her room at the Marvi Girls Hostel. A media report revealed, “According to a judicial report investigating the mysterious death of the Sindh University student, Naila Rind, which was presented in court, the student allegedly committed suicide following exploitation and blackmail by the accused in the case after the two exchanged photos of an intimate nature.” Whatever the cause behind her death might be, whether it was suicide or murder, it was quite clear that the male dominant society was responsible for Naila Rind’s death.

Both incidents happened in 2017, but three high profile incidents of three different Sindhi girls have been reported this year too. On September 16, 2019, the dead body of Nimrita Chandani, a final year BDS student at the Bibi Aseefa Dental College, Larkana, was found in her hostel room. That incident angered the people of Sindh, especially the youth. At the very beginning of the investigation, the police said that it was a suicide, but later, new aspects of the case emerged. The final post-mortem report rejected the claim that she had committed suicide. The report revealed that Nimrita was sexually assaulted and then murdered. The report stated: “The constriction of the neck from outside by ligating material (narrower in width as self-explaining from ligature mark present on the neck to be compared to the recovered ligature with configuration of ligature mark advised) has caused the death of the deceased by producing asphyxial signs.”

Two months after the incident of Nimrita’s death occurred, the horrific news was reported that a ten-year-old girl, Gul Sama Rind, was stoned to death on the pretext of honour killing in Wahi Pandhi of the district Dadu. This incident occurred on the night between November 21 and 22, 2019.

After the incident of Gul Sama, on December 1, 2019, another young girl, Dua Mangi, was abducted from DHA, Karachi, and her friend, Haris Soomro, was shot and injured because he resisted the abduction of Dua.

It is an alarming situation that females are neither safe in rural areas nor in urban centres, like Karachi, of Sindh. Surprisingly, while the civil society of Sindh has continuously been protesting and demanding the safe recovery of Dua, some patriarchal mindsets, instead of condemning her abduction, are criticising her for wearing a sleeveless shirt when she was abducted. They hold Dua responsible for her abduction because according to these sick-minded men, it was her ‘vulgarity’ that attracted the kidnappers.

Sindh is known to be a land of Sufis and dervishes; it is the land of peace. But unfortunately, the peaceful co-existence of Sindhi people is becoming a thing of the past. If we talk about the causes of growing religious extremism in the province, in terms of peaceful co-existence, it may be analysed that through a ‘conspiracy’ Sindh is being thrown in the fire of extremism. But the miseries and deprivations of Sindhi women cannot be brushed aside blaming a conspiracy because we, as citizens of a frustrated patriarchal society, are responsible for the sufferings of women.

Before blaming any ‘powerful authority’ for hatching a conspiracy behind everything, we must acknowledge our flaws through self-criticism, and we must try to rectify these issues. Let’s raise our voice for justice for Nimrita, Tania, Naila, Gul Sama, and many more killed, raped, marginalised and persecuted women. Also, let’s make a demand of safe recovery of Dua Mangi, along with this promise that we will not only always be proud of our culture, we will also adopt positive traditions of our five thousand-year-old Indus Civilisation, which teach us how to become a good human being and how to behave with our women.

The writer has a PhD in Global Studies from the College of Liberal Arts, Shanghai University, China