* The event began at 6:30 in the amphitheatre of the museum crowded with people from all age-groups and the introduction to the film was given by Raju Jamil, a veteran television actor 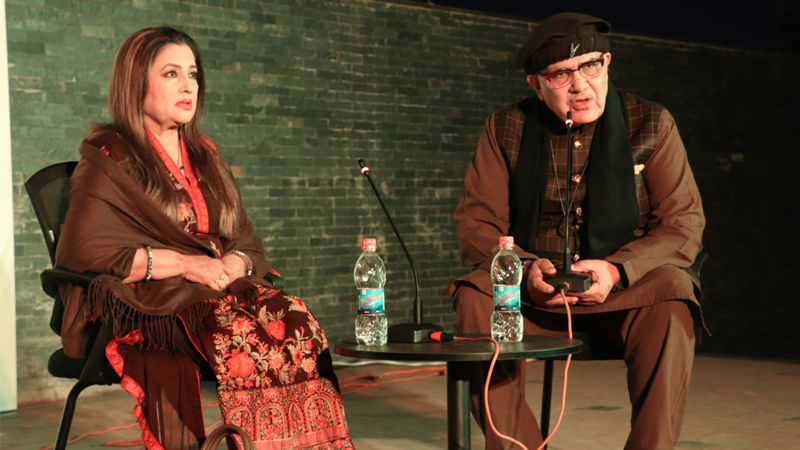 One of the many enticing characteristics of the administration of National History Museum is that it does not focus solely on the political history of Pakistan, but time and again, keeps organising events which also acquaint people with the development of the country’s art and literature over the years.

A similar attempt was made on the 30th of November, 2019. Before the winter season with its mist arrives in its full swing and inclines people to stay confined to their cosy rooms, NHM chose a night sandwiched between the last week of November and the first week of December for holding “Lollywood Night”, an event carrying the purpose to revive the culture of open-air cinema in Lahore. The film opted for screening was “Naela”, a blockbuster of its time, directed by Sharif Nayyar and based on a novel by the popular novelist, Razia Butt. Released in 1964, the film took Pakistanis by storm, partly owing to its music which people relish to date, the most famous song being “Gham e Dil ko in Aankhon se”. It also happens to be the very first song to make its entry into the plot of the film, picturised on the protagonist, Naela (Shamim Ara) who sings it on the demand of guests who have gathered to celebrate the arrival of the family’s two young men (Santosh and Darpan) from abroad.

The event began at 6:30 in the amphitheatre of the museum crowded with people from all age-groups, the introduction to the film given by Raju Jamil, a veteran television actor and Nisho Begum, a celebrated film actress. The former acquainted the audience with his extensive research on the film and aroused their curiosity by telling how the film’s colours were given to it from England because of the lack of cinematic techniques in Pakistan back in those days. He also told how the producer himself, Agha GA Gull had taken pains to get the sets for the film built inside his own house. When asked about the most attractive aspect of the film, Jamil told that “Naela” takes care to represent all those mannerisms which we once had in our culture, but have unfortunately lost in the existing times. The conversation was then steered in Nisho Begum’s direction, who although belonging to a generation that came after Shamim Ara, told how the former actress and her contemporaries had set standards and legacies for young performers like her to carry and continue with.

The introduction given by the two living legends continued for half an hour, after which the film was played on a projector, creating an aura the like of which people from my generation have never witnessed. The nip in the air was accounted for by a tea-seller who had set up his stall right at the entrance of the amphitheatre, the curls of smoke of which were visible in the light being exuded only from the film’s projector in the dark of the night.

That a classical film was being played from the golden era of Pakistan’s film industry in a museum situated in the historic Iqbal Park was a one-of-its-kind amalgamation of two different aspects of the nation’s history. The presence of a large number of people told that Pakistanis are still in want of not only the long-lost culture of open-air cinema, but also of films which tell stories that are deeply rooted in our culture and contain songs that can be chanted even after fifty five years of their release.