Music a cure for the soul, Argentina

ARGENTINA: Picture a hospital: the bustle of harried doctors and nurses, time dragging for lonely patients, and the pervasive sadness of a place for the sick and dying.

And suddenly, there’s music — live, classical music, the sounds of masters like Johannes Brahms and Giuseppe Verdi — to make it all a bit more bearable. These unannounced flash concerts are staged by an organization called Music for the Soul, and on this particular day at Alvarez Hospital in Buenos Aires the artists are 70 musicians, a choir, two sopranos and a tenor.

They perform for free, and most of the time with fellow musicians they meet for the first time right then and there. The network was created in Argentina five years ago and now operates in 10 countries across three continents.

It is made up of professionals from prestigious orchestras who donate their time and passion to share the soothing power of music. The organization boasts more than 2,000 performers and has given some 300 concerts in a format that has inspired similar programs in Uruguay, Chile, Bolivia, Paraguay, Peru, Ecuador, Italy, France and Israel.

The force behind it all was a young orchestra flutist named Eugenia Rubio, who died of cancer at the age of 24. She asked colleagues to play for her as doctors tried to keep her comfortable in the final months of her life. “Eugenia was my partner, and although this idea was born of suffering, we realized that music is a magic channel that allows people to forget their pain, their loneliness, their incapacity,” said Jorge Bergero, founder of the project and cellist for the orchestra of the Teatro Colon in Buenos Aires.

After Rubio died, “we decided to carry on with 10 musicians and today there are more than 2,000 of us”, he said.

The organization’s web page allows musicians to volunteer and hospitals to request concerts. The only pre-requisite is that the musicians be professionals. “The musicians come because they want to. They do not get paid. No one is looking at their watch,” said Bergero. 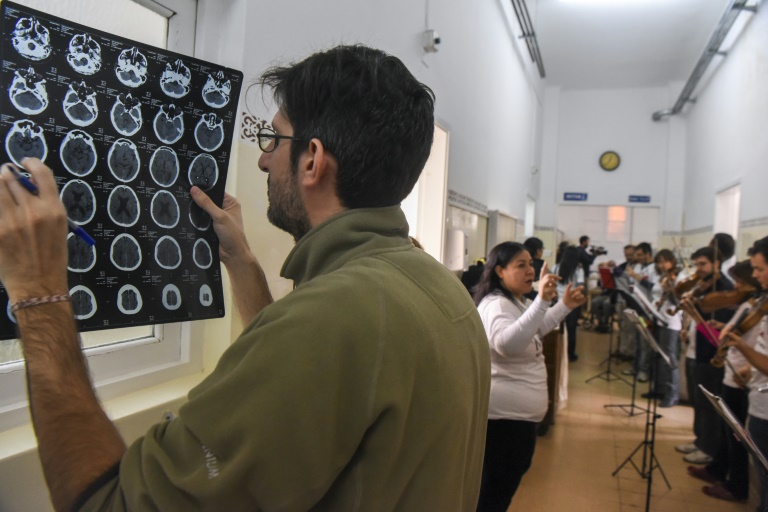 Concerts are held on Mondays, the day that orchestras usually have off.

The musical scores are sent via email, and the musicians meet each other right before the show. They rehearse right there on the spot. “I come to sing out of selfishness because it helps my spirit as well. It is my best therapy,” said Soledad de la Rosa, a soprano.

In the main lobby of the hospital in a lower middle class neighborhood, applause and shouts of “bravo!” ring out with the last notes of Verdi’s La Traviata. The idea is not to disturb the routine of the hospital but that is a tough task when the walls are reverberating with the lively sounds of Brahms’ Hungarian Dances.

Some find it irritating but most people are fascinated. “I had never heard an orchestra,” says a lady named Liliana, filming what she can for her sister, who is in a bed three floors up.

The staircases are prime places to watch the concert in the lobby and they fill quickly, with many of the spectators wearing medical garb. “Music has a healing effect because it is related to spirituality, and in patients who are approaching the end of their lives it allows them to reconnect with joy, happiness and emotion. It is absolutely therapeutic”, said Ana Maria Soriano, director of palliative care in the hospital’s cancer ward. 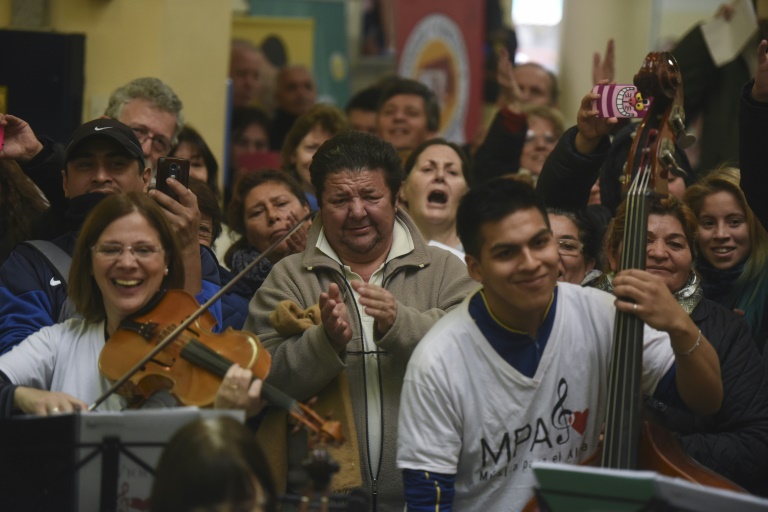 Out of nowhere, a patient asks permission to sing and surprises everybody. Claudia Llovet is a soprano who came to the hospital for treatment and knows all about how music helps fight sickness. “I used to sing to my mother when she had Alzheimer’s. She did not recognize me anymore, and this was the only way for her to connect with me,” said Llovet.

When the concert ends, eight musicians and two singers head off through the hallways of the hospital to hold smaller performances in patients’ rooms.

Doctors get flustered when people with violins and double basses barge in. But the hospital management is OK with it all. “Play another, please,” says a man named Daniel. He is 68 years old and has been an invalid for two. “It is a joy for the soul. Classical music is better than any kind of medicine.”

Further back in the room a young woman leans down toward her sick grandmother and together they make as if they were dancing to the music of Verdi. “It touches me to see how this affects the patients. For a short while, they stop thinking about their illness and focus on the music, which fills the heart with happiness,” said Laura Cordero, the director of the hospital. 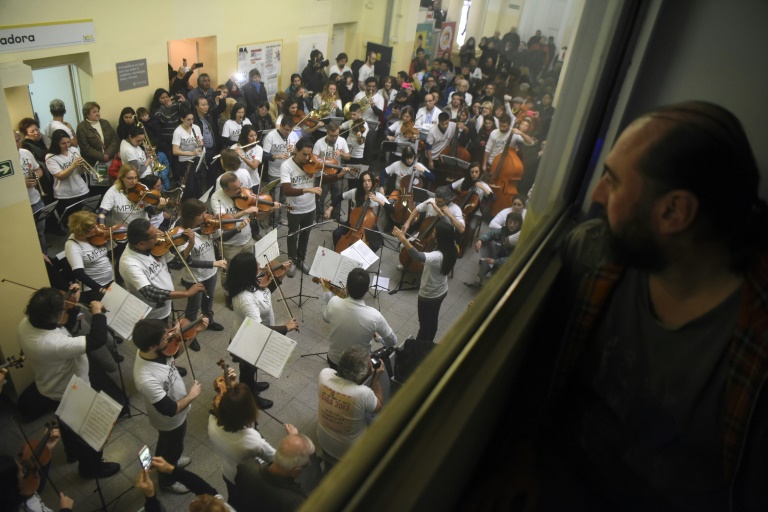 Then, as if an invisible conductor waved an imaginary baton, the intimate concert ends and with a sigh a nurse says, “We are a hospital again.”