Thirty-five years ago, on October 31, 1984, then prime minister of India Mrs Indira Gandhi was shot dead by her two bodyguards belonging to the minority Sikh religion. Lamenting the event, Mrs Gandhi’s son, Rajiv Gandhi, stated, “When a big tree falls the earth shakes.” 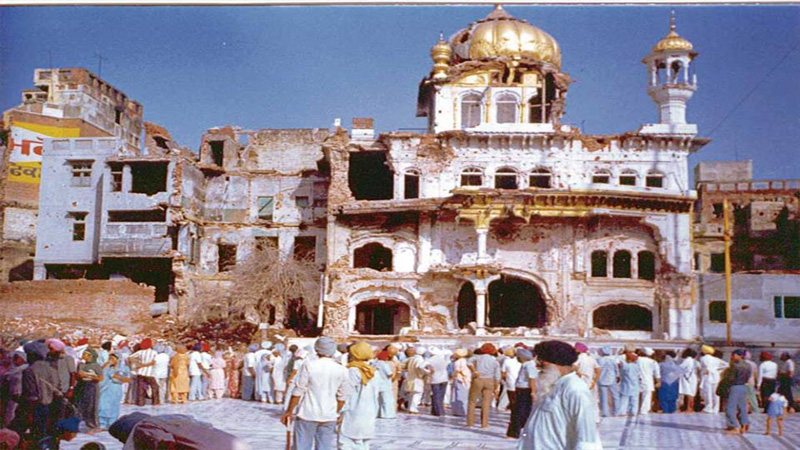 In the subsequent days, the world witnessed a state-sponsored, highly co-ordinated and deeply motivated pogrom-directed against the Sikh community-reminiscent of another Holocaust. According to independent sources, almost 20,000 Sikhs were massacred and exterminated. The earth really shook. The extremist Hindu members of the Indian National Congress spearheaded the onslaught and refreshed the memories of Genghis Khan, except they didn’t erect minarets of skulls, as they preferred to burn them all.

Among many, the ostensible reason for Mrs Gandhi’s assassination was the desecration and partial destruction of the Golden Temple (Harmandir Sahib), as the latter is the holiest place in the Sikh religion. Just months before her assassination, Mrs Gandhi sanctioned Operation Blue Star in June that year to kill or capture her former political ally, Jarnail Singh Bhindrawala, along with the members of Babbar Khalsa and thousands of innocent Sikh worshippers and pilgrims. It is an open mystery how Bhindrawala turned from an ally to a traitor. Previously, Mrs Gandhi’s continuous bullying left Babbar Khalsa with no choice but to demand provincial autonomy. Before that, the persecution was extended to Akali Dal as well, which resulted in more support for Bhindrawala. However, Mrs Gandhi was determined to dominate Indian Punjab ‘by employing other means’ and confined her Sikh political rivals in the Golden Temple.

Interestingly, of all the mighty Indian Army, Mrs Gandhi deputed a Sikh soldier, Major General Kuldip Singh Brar, to execute the operation. Understandably, it is not the duty of a soldier to question the command or to analyse the rationality of given orders. However, it is pertinent to probe why a Sikh was chosen to attack the holiest place of the Sikh religion. Wasn’t that a calculated attempt to deepen the fault lines within the Sikh community? Wasn’t Major General Brar put in such a difficult position to demonstrate its loyalty towards Hindu India? However, the Indian Army under Brar executed the operation and committed one of the most serious war crimes in the history of warfare.

Later, the Indian Army claimed that a handful of Sikh militants were inside, and most were flushed out, since Bhindrawala-the centre of gravity-was killed. Nonetheless, the army used main battle tanks to breach the premises, and one was heavily damaged due to rocket fire. It makes one thing clear that Bhindrawala was well dug-in and inflicted serious damage on the Indian Army. On the other hand, it also makes clear that the Indian Army used heavy calibre weapons, which also resulted in collateral damage and destruction of the main dome. The survivors of the carnage told horrific stories on the use of unrestricted and indiscriminate fire by the Indian Army, as for the latter every Sikh was a militant.

It would not be an ambitious argument that Indian leaders have resorted to using violence and ‘other means’ in order to become a great power. For instance, in retrospect, perhaps the Gandhi family paid a grave yet bitter price for its mischievous role in separating the East Pakistan from its western half. The family lost Mrs Gandhi, and later her son Rajiv Gandhi was killed in a suicide attack on May 21, 1991, by a minor girl, nicknamed Dhannu, for his role in sending Indian Peacekeeping Force (IPKF) to Sri Lanka. The members of the IPKF led a reign of terror, which included extrajudicial killings and repeated rape of Sri Lankan women; alas, Dhannu was among those females.

There is absolutely no question of India being a great power; nevertheless, the essence of its greatness greatly belongs to its great Mughal Muslim rulers. And before Mughals, the Sultans of Delhi quite remarkably managed pluralist city-states and societies. However, the dilapidated and awe-inducing conditions of Muslims in India and the calculated reign of terror orchestrated against other minorities is greatly deplorable. Indian leaders must realise that great power comes with great responsibility. After the creation of the Republic of India as well as in contemporary times, they have utterly failed to exhibit the slightest sense of responsibility. For example, the incumbent Indian Prime Minister Narendra Modi was once a much disliked person in the west, and was denied visa on multiple occasions for his role in the Gujarat riots and killings of thousands of innocent Muslims.

It is quite unfortunate that broad-minded people like the 22-year old Indian lady Gurmehar Kaur is struggling hard to live and pursue a career in India. The only crime committed by Miss Kaur was to state: “Pakistan didn’t kill my father; War did.” It is to remember that Kaur’s father Captain Mandeep Singh was killed in Kashmir back in August 1999.

Shamefully, Indian cricket star Virender Sehwag, out of his narrow-mindedness, tweeted in response to Kaur: “I didn’t score two triple centuries, my bat did.” Nevertheless, it is a good omen that the Indian civil society and academia are raising voice against the ongoing bigotry and bickering. Miss Kaur’s righteous voice and other people such as the late U RAnanthamurthy’s Hindutva or Hind Swaraj (2014) can be taken as examples of such endeavours.