* A large number of countries, including the United States, have replaced the left-hand drive rule of traffic with right hand driving

It has been rightly said that if one wants to know about the psychology of people, just take a look at the way people in the vehicles are moving on the roads. We in Pakistan have proved the best manifestation of this phenomenon because on our roads, the scenes of traffic indiscipline are visible almost everywhere. There have been two very fatal accidents in my city Multan on the university road in just two days and the main cause was the non-observance of the lane rules by the bikers, especially. This has been a major issue with the people in general in Pakistan and especially in the towns where enforcement of traffic rules is not that strictly observed.

The drivers on the roads with lanes printed/marked on them are supposed to use the left-hand lane of the roads for normal speed and only the high-speed vehicles can remain in the right-hand lane as per traffic rules.

Although a large number of countries, including the United States, have replaced the left-hand drive rule of traffic with right hand driving but we could never find sufficient will and desire to do so. This phenomenon may not be of any significance in the general mindset of Pakistani people but it is causing a large number of accidents on the roads and so the loss of life and material as well. In my daily routines while using any roads, I see that many bikers do not follow the lane fixed for them especially on lane demarcated roads of the city and drive in whatever lane they can find the empty space. Since the arrival of metro bus and its roads, many bikers would like to drive under cover of the metro road, in an effort to find shade in the hot summer season and so come at the extreme right of the roads. This causes a lot of inconveniences to the traffic which is trying to follow the rules.

Same is the case with the U-Turns on these roads. One needs to take a U-Turn in order to descend or ascend the road normally but the same becomes a huge issue because, on the one hand, the drivers have to take care of the drivers who are shifting their lanes not as per rules but as per their convenience but also the biker, cars, and donkey carts, and sometime vans that are entering the road wrongly and occupying the right lane of the road in opposite direction. There are mostly no traffic wardens to check this situation and force the drivers to take a U turn and enter the road on a proper point fixed for this purpose. And even if the traffic warden is on duty there, very few drivers would go for the right lane and the right entry.

One needs to take a U-Turn in order to descend or ascend the road normally but the same becomes a huge issue because, on the one hand, the drivers have to take care of the drivers who are shifting their lanes not as per rules but as per their convenience but also the biker, cars, donkey carts and sometimes vans that are entering the road wrongly and occupying the right lane of the road in opposite direction

Same is the case with the use of fast left lane and the slow right lane and the lanes for the vans and buses. No one takes care of this and everyone drives where they like and so cause a lot of inconvenience for the ones who genuinely need to go on a fast lane. It has been frequently seen that a car is going on the extreme right side very slow as the drive might be busy in talking or using his phone or simply doing a relaxed drive and is not letting the other drive over take him in case they are in a hurry. Why do such drivers not realize that if they need to go slow they may use the second lane instead of becoming a leader in front of all the vehicle following them? 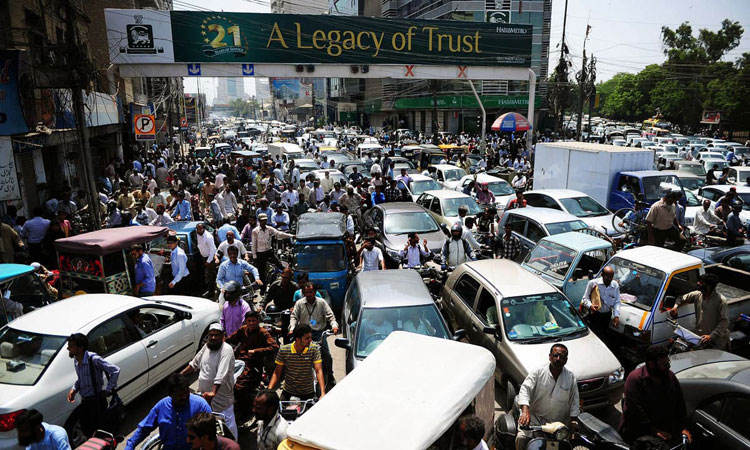 Our undisciplined behaviour is reflective of the lack of discipline in our otherwise social life. It may be acceptable to many in Pakistan but if we follow, as in many other matters, the developed nations of worlds, we may also follow them in traffic rules. This will ensure not only the safety for all but also a smooth and convenient flow of traffic on the roads. In fact, the correction of violation of traffic rule can lead to right treatment of many other social evil and violations as well. So, in order to develop the traffic sense, we should not only introduce effective policing in this regard but also, at educational levels, the traffic sense may be developed for the upcoming generation for the greater good of the society. Just a few years ago, the fewer number of vehicles made it possible for the drivers to make little bits of violations of traffic rules and escape scot free of any troubles. But now the vehicles on the roads have increased multiple times and have rather overcrowded many of the cities and, so, to make it possible that all can reach their destinations safe and sound and with convenience, we need to follow the traffic discipline.