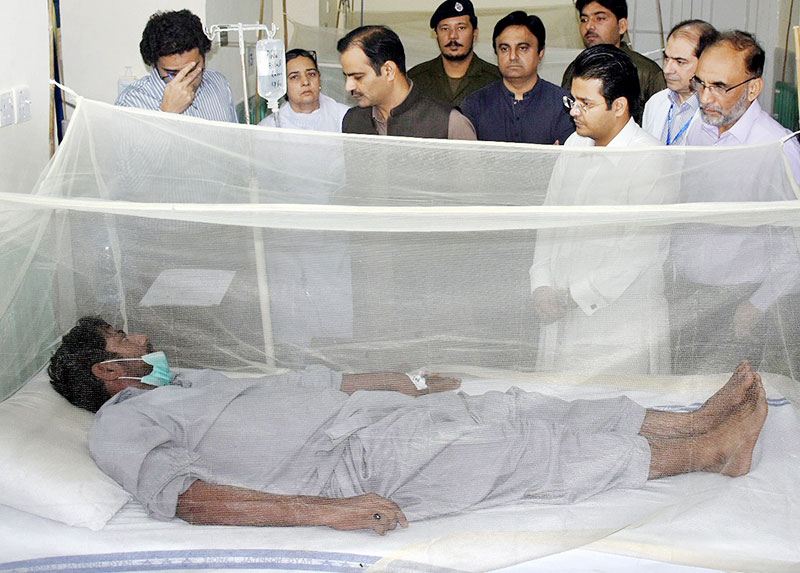 The number of dengue fever cases in Sindh in October has crossed 3,000 mark, with most of the cases reported in Karachi, a private TV channel reported on Saturday.

The number of dengue cases in current month has crossed the tally of dengue patients in the province in year 2017 and 2018, Dengue Surveillance Cell (DSC) said in its statement. The disease has claimed 20 lives this year, it added.

Most of the cases in Sindh were reported in Karachi this year – 2,889 out of a total of 3,114 cases. Overall 6,331 dengue cases have been reported in Sindh this year, of which 5,931 surfaced in Karachi, the surveillance cell reported.

Prevention and Control Program for Dengue (PCPD) Sindh Spokesman said at least 165 more dengue fever cases have been reported throughout Karachi city in 24 hours, taking the toll to 5,983 since January 1, 2019. He said as many as 184 new dengue fever cases emerged across the Sindh province in a day, out of which 165 were detected in Karachi and 19 in other districts.

Meanwhile, as many as 5,657 dengue patients have been discharged from hospitals in Khyber Pakhtunkhwa after proper treatment, said Dengue Response Unit (DRU) in its latest report issued on Saturday.

As per details, the total number of patients having complaint of dengue fever has jumped to 5,835 in the province. The DRU in its report said 168 patients are under treatment in Peshawar’s various medical facilities, while 5,657 patients have been discharged from the various hospitals of Khyber Pakhtunkhwa (KP).

Sources said the provincial government is taking preventive measures to control dengue and added that separate wards had been established in all government hospitals for dengue patients.

In the federal capital, the government has prepared a plan for eradication of dengue from the twin cities of Rawalpindi and Islamabad. The plan was discussed at a meeting chaired by Special Assistant on National Health Services Dr Zafar Mirza in Islamabad on Saturday.

Dr Mirza said Rs 19.64 million have been earmarked for the plan to be executed in the areas of Rawalpindi and Islamabad where most of dengue cases have been reported. He said that over 200,000 people will benefit from the project. Several activities will be arranged for eradication of dengue under the project, he elaborated.

The special assistant said it is the first time that a national-level dengue eradication policy is being formulated with the cooperation of the provinces. He said there has been a reduction in the number of dengue cases. He said awareness campaign has been started against the dengue fever. He added seventy volunteers will be trained in the areas where most of dengue cases have been reported.