Our spokesperson Muneezay Moeen met Deputy Speaker, Qasim Khan Suri, to talk to him after the Supreme Court suspended an election tribunal’s September 27 decision to unseat Suri was reversed. A member of the Pakistan Tehreek-e-Insaf (PTI) from Balochistan, and Deputy speaker of National Assembly, Suri answered a few questions: 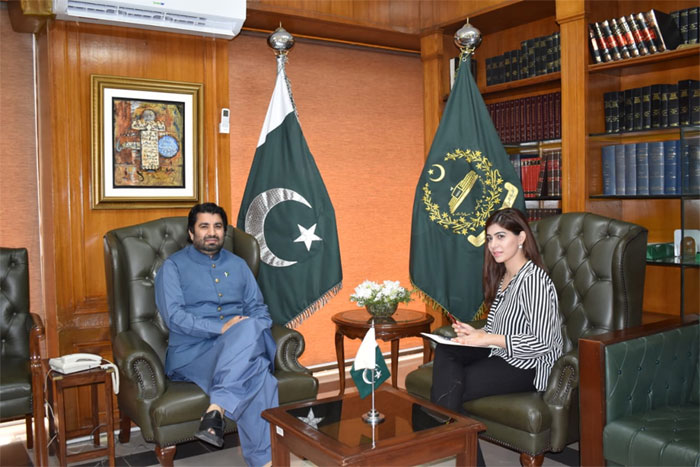 Q. You joined Pakistan Tehreek-e-Insaf by choice or was it your passion?

A: When Imran Khan declared the commencement of the Pakistan Tehreek-e-Insaf, he had a huge fan following. I was much inspired by the personality of Imran Khan; he is a man of life force, spirit and devotion. We have all seen him collecting aid from people for the construction of his cancer hospital. With the support of all of us, Khan has assembled hope. In other words, this nation is his hope, after Allah Almighty. Hand in hand, we can take Pakistan to the list of first world countries.

Well, in 1996, I found an advertisement in a private newspaper regarding membership of the Pakistan Tehreek-e-Insaf. My brother and I decided to submit our documents in the party office. And since then, we are part of the team of Imran Khan. After the constant struggle of twenty-two years, the dream of Khan has come true. All of us, members of the Pakistan Tehreek-e-Insaf, have worked day and night for our country. I can proudly say that even a common man like me can be an important part of the PTI, and we have many more examples in the parliaments of Pakistan.

Q. What do you think was the reason to de-seat you?

A:This decision was declared upon the basis of a NADRA report. The election tribunal declared the result of NA-265 (Quetta-II) null and void. The ECP checked the number of votes cast in the area, and was not able to biometrically verify 52,756 votes. Several votes had incorrect CNIC numbers, and in some votes, the same CNIC number had been used multiple times. More than 49000 votes have both credentials verifiable. The reason why thumb impressions are verifiable is the use of non-magnetic ink. There are 31,098 votes that are listed under improperly cast ones. Nowhere in the report of NADRA is stated that I did any wrongdoing. I won by 5,545 votes. I filed an appeal against the decision of the election tribunal.

My lawyer, Naeem Bukhari, prepared the case based upon evidence. He made the case in front of Justice Umar Ata Bandial that I was not guilty, and the number of 52,900 is not solely mine. My number of votes is 25,900.

Pakistan Tehreek-e-Insaf’s manifesto is an ideal code of conduct, and whosoever violates it shall be penalised, whether he is in government or not.

Q. Who is your favourite speaker, Ayaz Sadiq or Fahmida Mirza?

A: Let me disclose it to you! I was unaware of the role and responsibilities of a speaker. When I was an active politician, or you can say, a struggling politician, I worked at grassroots level. Serving as the speaker of an assembly is a completely different job, with a huge responsibility of an elected government representative. I must say that before I was designated as the deputy speaker, I found the work of a speaker as a most boring one. It is against my nature, I love to be in the field, but Khan assigned me this responsibility, and I am performing it with the whole of my heart and mind.

I had no idea of ruling in an assembly; my mates advised me to review video clips of previous sessions, but I denied. I decided to go with my own pattern to conduct the sessions. I am the first one who conducts the sessions in our mother language instead of using an international language.

Q. Provincial Assembly or National Assembly, which one is easy to conduct? Do the members raise national concerns or is individual agenda-setting the standard practice of parliamentarians?

A: The people of Pakistan elected Imran Khan as their prime minister and all of us on the basis of the manifesto of the Pakistan Tehreek-e-Insaf. Khan is our leader, and he works with passion, day and night. Every parliament argues over petty issues, but in the end, every single parliamentarian stands united under the law. We envision good governance, improve the institutions, and to make Pakistan that Quaid-e-Azam envisioned.

Q. Why is the word ‘selected’ forbidden whereas it can be eliminated afterwards?

A: Everyone in parliament is elected through vote. Every single person has to submit his or her papers, including the speaker and deputy speaker. When we say the word ‘select’, its disgraces the parliament.

Q. The role of speaker must be neutral, but in Pakistan it is otherwise. Why?

A: That’s not true. When Allah Almighty assigns you a responsibility you have to perform in it with all your means. Certainly, my affiliation is with the Pakistan Tehreek-e-Insaf; the ruling party designated me, and now I am representing the whole of Pakistan. I don’t work as a representative of the PTI but as a responsible Pakistani speaker who has to cater to everyone living in Pakistan. Never in my whole life I thought I would be serving as a speaker, but now I have learnt how to combat the challenges.

Q. ‘Hum Imran hain’, you have an interesting WhatsApp status.

A: It is about the one hundred and fifteen day protest when I learnt about Imran Khan. I am lucky to be a part of his team.

Q. Imran Khan wishes to reform the Punjab police as he made police reforms in Khyber Pakhtunkhwa. What do you think? Will an ordinary man be given the right to lodge an FIR against a police officer?

A: We all know that supporter of the PTI are raising their voice against violence at every platform. Wherever there is a lacuna in the system, it is being pointed out and fixed. The reason why the PTI got re-elected in Khyber Pakhtunkhwa is the ideal police reforms.

We stand with the Kashmiris and condemn India’s action. We will fight for their rights at every international forum. The whole world knows that Imran Khan is a dignified leader who cannot be bribed.

It will take time to change 35-year bad governance in five years. Let me quote an example here. America was hit by an economic disaster fourteen years ago; it has still not recovered from that. It is a race that only the slow and the steady can win. How can we expect instant achievements? It is difficult but not impossible. I’m confident that we can make Pakistan better than others in every aspect.

Q. What would you say to those who criticise the one-year government of the Pakistan Tehreek-e-Insaf?

A:It is always easy to brag and hard to perform. We have tried to eliminate corruption, and this year has been corruption-free. We don’t follow the trend set by last governments. Pakistan Tehreek-e-Insaf is the name of change. People said Imran can’t. Due to Allah’s support, I have always been successful. I’m saying that this era of Pakistan would be remembered in golden words.