She misses home and prays not to be sent back 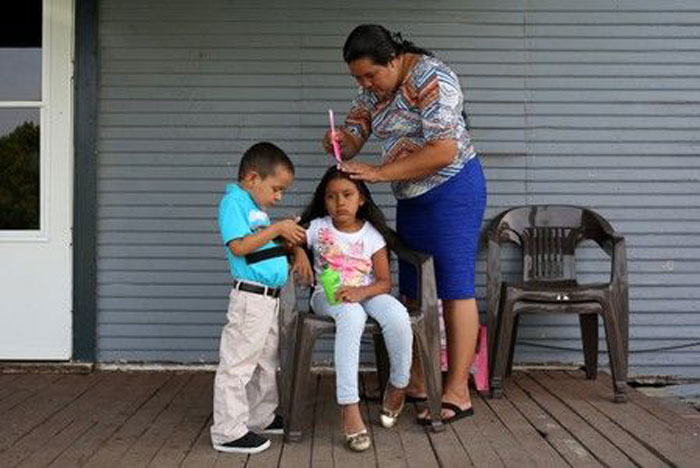 Irma Rivera is praying. As on every Sunday, the 33-year-old Honduran mother bows her head at a neighborhood church. She has dressed her children, Jesus, 5, and Suany, 8, in their best clothes and implored them to sit quietly beside her.

She prays that her husband, Jose, who was murdered back home, is “in a good place.” She prays to be strong for her kids in this new country, to live long enough to see them grow up. She prays for the family members she left behind.

Rivera views her new life with conflicting emotions. For their first year in the United States, she and the children were guests in a relative’s house, and she constantly worried they were outstaying their welcome. Recently, she and her sister, who arrived from Honduras a few months ago, rented a small apartment together. Rivera, Suany and Jesus share an inflatable mattress in a bedroom with Rivera’s teenage niece. “We don’t have a lot, but we are happy,” she said.

After walking thousands of miles north through Guatemala and Mexico, where in the spring they sought protection in a caravan, the three asked for U.S. asylum in May 2018 at the port of entry near San Diego, California. They spent three weeks in U.S. custody, then convinced an immigration official they had a “credible fear” of returning home. They were released pending court hearings to decide their fate – a process that could take years.

As grateful as she is to be in America, Rivera is homesick. She breaks into tears as she lists the relatives and close friends she misses. “But because of what happened, I don’t want to go back,” she said.

According to an asylum officer’s notes reviewed by Reuters, Rivera told the officer in May 2018 that her husband, a farmer, was murdered by field workers after he threatened to report them to authorities for stealing valuable palm fruit from the land he tilled. In the fertile Bajo Aguan region where the family lived, a violent conflict is raging over land rights. The area has been flagged by Human Rights Watch as an epicenter of murders “with impunity.”

After the murder, “everything fell apart for me,” Rivera told Reuters. She said the same group that killed her husband – never apprehended by police – threatened the rest of the family, forcing her to sell their house and flee with the children. Since then, she has heard, her village has only become more dangerous, and even more families are making their way north.

Rivera arrived in the United States with straightforward expectations. “I thought the children would go to school, and I’d work, and I’d get settled,” she said. “But it’s been very difficult here.” She is still grieving for her husband. Every time something new happens, she said, “I want to tell him about it.”

She is not yet able to work legally, and has struggled to make rent and pay lawyers’ fees. She relies in part on the generosity of family and friends. Recently an American woman asked her a question in English and she was embarrassed because she couldn’t understand, let alone reply. Her kids miss Honduras, too – the many children in their extended family, not to mention their dog, Rocky.

But they are adapting, faster than she is. Suany, who attends a bilingual school, speaks both English and Spanish with her new friends. Jesus has learned a few words and phrases, among them: “What is your name? What are you doing?” And: “Car!” Rivera watched the news in August about the white supremacist in El Paso who targeted immigrants and Latinos in a mass shooting. “It’s racism,” she said – something she worries about but says she has never experienced in this country. She prays she and the children will be able to stay here. Recently, Rivera said she heard of a woman denied asylum and given 30 days to leave the country. “To know that could happen…” She doesn’t finish the thought.