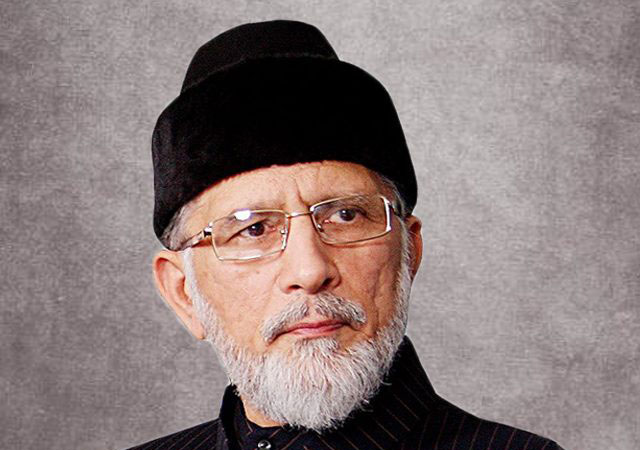 Pakistan Awami Tehreek (PAT) Chairman Dr Tahir-ul-Qadri on Saturday announced his retirement from politics and the chairmanship of the party.

“I am taking retirement from PAT chairmanship and politics,” Dr Qadri said in a video message on social media. Dr Qadri said he was not handing over leadership of PAT to his sons, but transferring power to the party’s council. He said he wants to focus on his academic commitments and writing. “I have health issues as well which is why I am retiring from politics and handing over all the power to the Supreme Council,” he said, adding that as leader of Minhajul Quran, he will continue to guide the nation ideologically.

Referring to the Model Town tragedy, Qadri vowed to continue his struggle for justice, adding that “it is part of our faith to demand justice until it is served”. He said Prime Minister Imran Khan must honour all the promises he made before his government came into power, including justice for the victims of the tragedy. “I pray that Pakistan Tehreek-e-Insaf fulfils its promises and delivers to the people all that it has promised in its manifesto to bring change in Pakistan,” he said.

“It was due to our struggle that the accountability process began and the corrupt mafia has now been held accountable,” he said. “We tried to stop unethical means from coming into the assembly and put all our energies to stop these ways. Unfortunately, in our politics, there is no room for the poor and the middle-class people,” he continued. “My political struggle is only 10 per cent of my overall working which I have been doing side by side,” he said. “We have focused on eradicating illiteracy from Pakistan and formed 5,000 educational institutions around Pakistan. It was through the platforms of Pakistan Awami Tehreek that we introduced articles 62 and 63 to the common people of Pakistan and made them aware of their fundamental rights,” he added.

“The martyrs of the Model Town incident are the result of the struggle of the movement. We protested for three months in Islamabad to create awareness in the people,” he asserted. “As a result of our movement, those who could never be arrested were held. Now it’s a test for the new people how they will continue the process of accountability,” he added.

Qadri also mentioned that PAT’s decision-making body will continue to operate independently in accordance with the rules of the Election Commission of Pakistan (ECP).

Qadri founded Minhaj ul Quran, a non-profit providing education, religious and cultural services, in October 1981. He also founded a political party, the PAT, in May 1989. In 1990, members from the PAT contested for the general elections and later on Qadri was elected as a member of the National Assembly. However, he resigned from his seat on November 29, 2004.