* Over the course of Georgia's complex history that spirit has been tested, with invasions by Russia, the Turks, Persians and Mongols 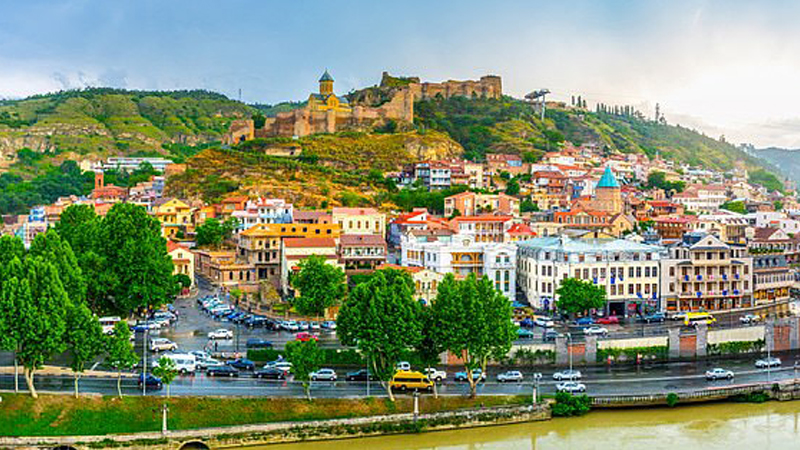 On a visit with war photographer Robert Capa in 1948, he said its people had an undentable spirit.

Over the course of Georgia’s complex history that spirit has been tested, with invasions by Russia, the Turks, Persians and Mongols.

Since the country gained its independence in 1991, relations with Russia have been problematic. But although Russian President Vladimir Putin is not popular, there has been no conflict since 2008.

Today, the centre-Right Georgian Dream party, led by a president and prime minister, are in power and the country’s hopes to join the EU are encouraged by the pro-West youth.

Hospitality reigns in Georgia – sandwiched between Russia and Turkey – with locals keen to show you the historical sites, of which there are a great many, and even keener to make a warm impression. A taxi driver may try to waive your fare after getting lost, or the diners on the next table could strike up a song in a restaurant.

Those who have visited the UK profess an affinity with the Cornish and Scots -and as far as they are concerned, Georgian is the only, unalterable cuisine. Your glass will always be full of home-made wine or potent grape vodka.

Home to just under four million people, the country is easily negotiable by car – and with direct flights from London, there’s no better time to visit.

Perched between the botanical gardens and the old town, the 16th and 17th-century walls of Narikala Fortress dominate the skyline of Georgia’s hilly capital, Tbilisi.

Almost a third of the country’s inhabitants live here. Tbilisi – built on top of sulphurous hot springs – means ‘warm’ and the old town is full of bathhouses, such as Orbeliani.

After your scrub down, stroll down the road to Culinarium Khasheria, which serves modern takes on local cuisine.

The city’s imposing landmarks are easily reached on foot – the Mother Georgia Statue, the Peace Bridge over the Mtkvari river, and the vast hilltop house of former prime minister Bidzina Ivanishvili.

In the evening, take a walk around the streets off Liberty Square, stopping in unassuming but top-notch restaurants such as Salobie Bia and Old City Wall.

On Sundays, worshippers flock to the golden Holy Trinity Cathedral, where Patriarch Ilia II celebrates Mass before being whisked off in a black motorcade.

Don’t miss: The fortresses, monasteries and cathedrals of Mtskheta, the old capital, 45 minutes away.

Where to stay: B&B doubles at the Radisson Blu Tbilisi (radissonblu.com) from £115 a night.

Since the country gained its independence in 1991, relations with Russia have been problematic. But although Russian President Vladimir Putin is not popular, there has been no conflict since 2008

The Bolsheviks were not particularly fond of stately homes, princes or poetry – so it’s surprising that the 17th-century Tsinandali Estate, in the Kakheti wine region, an hour and a half’s drive east of Tbilisi, is still standing.

Refurbished by Prince Alexander Chavchavadze – soldier, poet and the founder of Georgian Romanticism – in 1835, this is where the country’s 8,000-year-old winemaking process was formalised.

The house is now a museum and the vineyard produces about 150,000 bottles a year from 11 indigenous grape varieties.

You’ll see vines everywhere in Georgia, but here they cover the facade of the 141-room Radisson Collection hotel, which opened in the grounds in January.

A couple of days is plenty to visit the nearby Shumi and Telavi wineries as well. And if you need to tap out of being topped up, wander the ornamental gardens or flop by the rooftop pool.

Where to stay: B&B Doubles at the Radisson Tsinandali from £130 per night.

Joseph Stalin was born in Gori, an hour-and-a-half west of the capital, in 1878. At the museum dedicated to his legacy, your guide will say he was handsome and studious, great friends with Lenin and heroically escaped from Siberian labour camps six times. This Soviet-era oddity produces eye-rolling from some Georgians, but it does house a fascinating collection – including one of Stalin’s eight death masks.

A 20 ft statue of the Soviet leader was removed from the central square in 2010 and it’s the Georgian flag that flies from the 13th-century fortress on the small city’s outskirts, but there is a lingering sense of respect for ‘Uncle Joe’.

Don’t miss: Stalin’s railway carriage, built by the Romanovs in the 1850s.

Where to stay: Day-trip from Tbilisi.

The Georgian Military Highway splits this small mountain town of Stepantsminda in two – but it doesn’t take long to find deserted green spaces in the Caucasus.

Five hours north-east of Tbilisi, Stepantsminda is eight miles from the eerie Russian border, where hundreds of lorries queue to cross.

Hike the nearby Juta Valley – home of the best honey in Georgia – or visit Dariali, the country’s largest monastery, and walk to the waterfall nearby.

The Gergeti Trinity Church is the main attraction; it’s a sharp ascent that takes an hour (or you can drive) but the views of Georgia’s third-highest peak, 16,512ft Mount Kazbek, are spectacular.

Where to stay: Comfortable but sparse doubles at Hotel Stancia (booking.com) from £68 B&B.

Kutaisi, Georgia’s second city, is in the green west, has a population of about 150,000 and feels markedly different from Tbilisi, a four-hour drive away. Old men unload watermelons from their Soviet-era cars outside the Green Bazaar (central market), which is filled with a vast array of local produce.

On the surface this is old Georgia – it was the 11th-century capital, after all – with potholed streets and lines of crumbling houses.

Walk off your meal en route to the thousand-year-old Bagrati Cathedral, overlooking the city. At weekends you’ll encounter multiple wedding parties, arriving for short ceremonies before rushing off, horns honking, to celebrate.

This city is also a good base to strike out to the nearby Gelati monastery, Prometheus Cave (the largest in Georgia) or north to mountainous Svaneti.

Where to stay: B&B doubles at Hotel Solomon from £50.