Universal lessons the Battle of Karbala taught us! 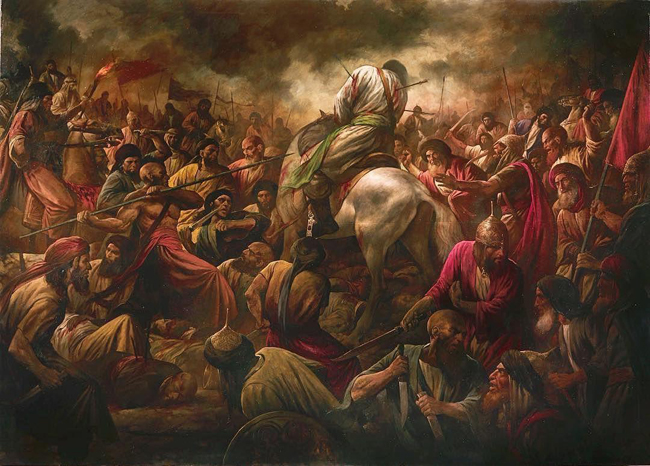 Some lessons last for days, others for years but a few for a lifetime. The incident of Karbala offers such lessons which are neither time-bound nor community-specific. In fact, the presumably western ideals of standing for something right, bearing difficulties and sacrificing the most precious things in life are universal lessons which Hazrat Imam Hussain (RA) demonstrated in real over thirteen centuries ago. Those precious lessons are for all times and for all communities.

Hazrat Imam Hussain (RA) stood for the right and refused to take oath of allegiance at the hands of Yazid. Despite lucrative offers, persuasion attempts and cowardly threats, he stood by his stance and did not budge even an inch from it. When Hazrat Imam Hussain (RA) realised that Yazid and his followers were adamant upon seizing power and were ready to do any wrong for that, he left for Kufa upon the constant invitation and assurance of the people of Kufa. However, he was betrayed and had to bear inexplicable atrocities on the burning sands of Karbala.

Although Hazrat Imam Hussain (RA) and his companions were facing extreme heat, prolonged starvation and parching thirst yet they did not prefer a safe exit especially on some unprincipled terms. They fought hard for their principles and embraced martyrdom but did not compromise on their tenets.

On the other hand, western societies illustrate Rosa Parks, a black woman of America, who in 1955 took a stand for right when she refused to surrender her seat to a White woman and get off the bus during days of extreme segregation in America. Western societies also highlight this lesson of forbearance through the life of Nelson Mandela who underwent serious persecutions and was jailed for years for standing against segregation in South Africa. Although these western figures are respectable yet they stand nowhere near the stature of Hazrat Imam Hussain (RA). And the lessons western society preaches to the world through these personalities are in fact given to humans centuries ago through Hazrat Imam Hussain (RA).

Western societies adopted these principles and transformed their societies. The only thing required to transform our society is acting upon these valuable lessons in letter and spirit.

If one person in society takes a stand for something right, others will join him/her and they can have great influence on the world around them. This practice can transform our unprincipled and undisciplined society to a principled and disciplined one.

The writer is a lecturer at Sukkur IBA University. He is currently pursuing his MPhil in Education and can be reached at kasiddiqui06@gmail.com