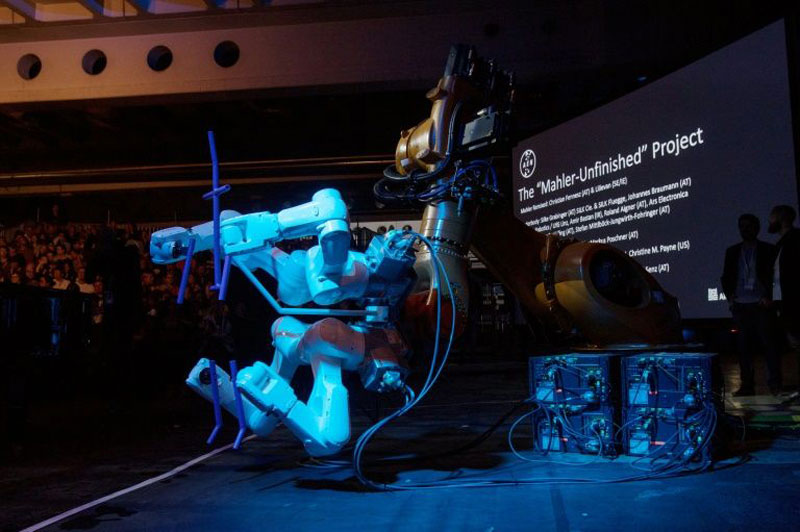 Can artificial intelligence turn out symphonies to match one of the greats of classical music?

That was the question posed by one unusual orchestra performance in the Austrian city of Linz on Friday, in which Gustav Mahler’s unfinished Symphony No.10 was played — immediately followed by six minutes of “Mahleresque” music written by software.

The project’s creator says that the two are clearly distinguishable but not everyone in the audience agreed.

“I couldn’t really feel the difference… I believe it was really well done,” Maria Jose Sanchez Varela, 34, a science and philosophy researcher from Mexico, told AFP.

The performance was part of Linz’s Ars Electronica Festival, which aims to highlight connections between science, art and technology.

The brains behind the pioneering performance was AI researcher and composer Ali Nikrang, who works at the Ars Electronica Futurelab research centre affiliated with the festival.

He used the open-source AI software MuseNet to write the music.

“It all sounds like music, there are emotions, but someone who really knows Mahler will notice immediately that it is not Mahler,” Nikrang told AFP, admitting Mahler’s typical “harmonic expressions” were not quite there yet.

He said AI learned from “data from the past, from data left to us by Mahler” so it may be able to create an exact copy of Mahler, but it still could not come up with a “concept” or overall theme for the music the way the classical composer himself did.

But Nikrang says that AI has nevertheless made great strides.

Working with the first 10 notes of Mahler’s Symphony No. 10, the software gave him four suggested segments, out of which he chose one, following which it continued giving him four more segments and so on.

In all, Nikrang evaluated a few dozen pieces before choosing what spectators heard on Friday.

“All the suggestions were quite good… That is not obvious with AI, at least given the state of the technology five months ago” Nikrang said, adding that MuseNet had enabled a jump in quality.

Christine Schoepf, the Ars Electronica festival’s co-director, said that back when she took part in the very first edition 40 years ago, “of course we couldn’t have guessed what would happen with AI”.

“The fact it would progress in such quick steps wasn’t foreseeable,” she said.

“This is of course really exciting,” said Aljoscha Burchardt of the German Research Center for Artificial Intelligence (DFKI).

“One wonders whether the machines are so smart that they can accomplish great music, or whether the music wasn’t such a great accomplishment after all?,” Burchardt asks.

“Maybe the pieces followed a graspable logic that in the past only very good composers knew, and now a machine can do it. That’s the question,” he told AFP.

With computers churning out work at a speed composers cannot compete with, prices could drop, but on the other hand — just as in other fields where “hand-made” commands more prestige — artists who write their music without software could be able to charge a premium, Burchardt said.

“Even with highly-complex AI, it depends on the artistic quality and skills of the respective composer,” he told AFP.

And of course, AI isn’t yet able to explain its projects to journalists either.

As Nikrang predicted, some spectators noticed when AI took over the composition in Friday night’s performance.

One of them, Manuela Klaut, said: “I somehow thought suddenly: ‘Ah, it is getting a bit more arbitrary’ or something like that’.”

But she admitted that it was hard to pinpoint what exactly changed, and the overall performance was still “great”.

“I felt slightly that the emotional depth that you have in a Mahler composition was missing, maybe also the melancholy,” the 39-year-old from Germany told AFP.